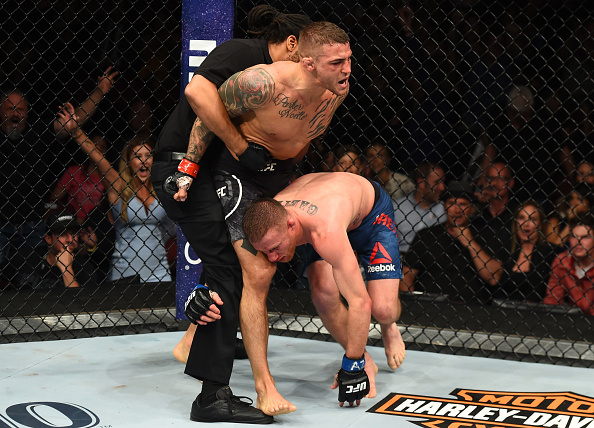 UFC Lightweight contender Justin Gaethje says he is satisfied with his performance at UFC on FOX 29, despite suffering a knockout loss to No. 4 ranked Dustin Poirier.

Speaking to reporters at his post-fight press conference, Gaethje said: “I’m content with what just happened as stupid and as crazy as that sounds.”

The self-proclaimed “most violent man in the UFC” is now 1-2 in MMA’s premier organization but says the outcome of his fights is not important to him.

It’s not about winning or losing

“I didn’t get in this sport to win or lose, it’s the entertainment factor for me and I will be known and remembered as one of the most entertaining fighters that ever did it,” he says.

“I’ve never been worried about winning and losing, the only thing I’m scared about is not performing and not putting on an entertaining fight,” Gaethje says.

It was “The Highlight’s” second knockout loss in a row, but he also picked up his third straight fight of the night bonus.

“You tell me, was that entertaining? Exactly, every single time I fight, it will be that,” he says defiantly.

Asked if he would consider changing his fighting style to avoid taking so much punishment, Gaethje shakes his head and says “it’s pretty evident that I fight the way I fight.”

“I wasn’t wishing to get knocked out again, but I can’t change the way I fight, it’s impossible for me, it’s who I am and it’s how I will fight every single time I go in there,” he says.

“I go in there to entertain people. This is the entertainment business, I fight for money and what I do helps me get paid a lot of money,” he explains.

Gaethje is a Division One All-American wrestler but says he didn’t feel the need to use his elite wrestling skills against Poirier.

“I don’t go in there to not wrestle, but I was kicking his ass on my feet,” he says.

“My game-plan was to go in there and break his leg, break his body and I did that. I was in the process of doing that. He took it, but it would have been stupid for me to get on top of him then, especially when I was landing leg kicks like that,” says Gaethje.

The Arizona native says he felt incredibly comfortable in front of his home crowd and nothing that happened in the fight surprised him.

“It’s amazing and it’s what I dream of, it really is, that atmosphere, I thrive in it,” he says.

“It was just like I thought it would be, a fight, a fist-fight. That’s what I just got in tonight, that’s what I’ve been preparing for all camp,” according to Gaethje.

Although it was a punishing affair, Gaethje says his cardio was not an issue as he was in excellent shape.

He admits that he thought Poirier was finished when he rocked him with a right hook in the third round but was impressed that the “The Diamond” was able to weather the storm.

“Yeah I did think I had him, I give him credit, he pulled through and gathered himself and came back strong,” he says.

“I’ve got nothing but respect for him, he’s going to be hurting for a very long time,” says Gaethje.

Time for a break

Gaethje plans to take a break from fighting to give his body some well-earned rest.

“Yeah, I’ll take some time off. I’ve got about 5 fights left in the UFC. I want the biggest fights possible, you know,” Gaethje says.

He says he already has plans in place for life after fighting.

“I want to golf when I’m 60, I have a human services degree, I want to do social work and hopefully I can buy a lot of houses and make money that way,” he says.

As dangerous as it is, Gaethje knows that his brawling, all or nothing approach is a must-see for fight fans.

The show will go on, but surely at a huge cost to Gaethje’s health.