MMASucka’s Submission of the Month for May 2018: Alexey Oleynik secures the 11th Ezekiel Choke finish of his career 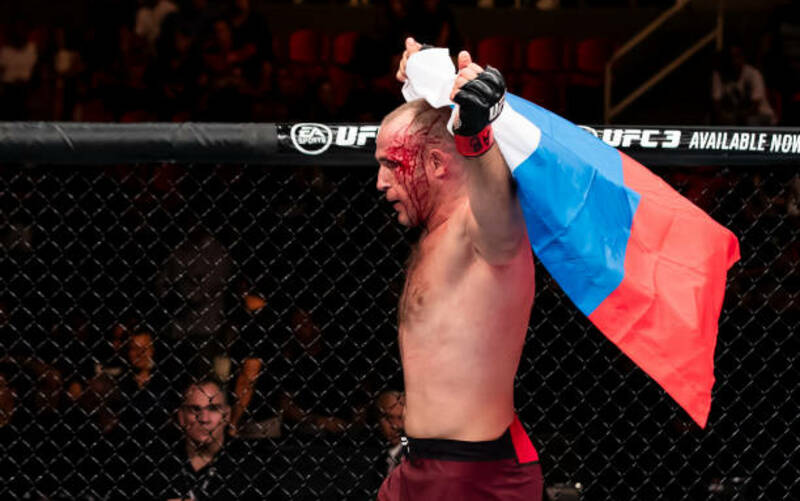 May 2018 was by far the most loaded month yet in terms of fights, submission, and knockouts. There will be more honorable mentions in each category than previous months. This seems to be the case with each passing month.

Because of this, from here on out, along with picking a winner and listing a slew of honorable mentions, three will be selected per month/category. Think of it as a first, second, and third ranking.

This month, all across the globe, we saw pivotal submission finishes. From Yusup Raisov winning gold and avenging his defeat to Marat Balaev in Russa, to Tatiana Suarez steamrolling Alexa Grasso before choking her out in Chile. This month saw no shortage of scintillating submission wins.

There can only be one winner, though.

Mid-way through the month, UFC 224 went down live from Rio de Janeiro, Brazil.

On the preliminary portion of the card, there was a pivotal heavyweight clash between up-and-coming prospect Junior Albini and savvy veteran Alexey Oleynik.

In terms of submission wins, there are not too many chokeholds that are considered rare nowadays. One of the more rare chokes we see pulled off in MMA is the Ezekiel Choke. Yet, as rare as it, Alexey Oleynik has 10 of them on his insane resume. And, spoiler alert, he got his 11th vs. Junior Albini.

Immediately as the fight starts, the commentators are talking up Oleynik’s unreal ability to pull off Ezekiel’s. Citing his 2017 win over Viktor Pesta where he won with an Ezekiel Choke – while mounted! This won MMASucka’s Submission of the Month for January 2017.

Despite not being tagged with anything too significant, Oleynik was cut near his eye early by the hands of Albini. About a minute and a half into the first round, the two clinched up. This was the beginning of the end for Albini, as it has been for so many of Oleynik’s previous opponents.

As soon as they clinch, Oleynik knows what to do as he is a master in this position. He begins to synch the Ezekiel in before the fight even hits the mat. Albini attempted to fight this by doing exactly what the Russian was hoping he would do; tripping him to the mat.

When you are dealing with someone who is as good as Oleynik is on the ground, there is virtually no escape while in this position. It didn’t take long for Junior Albini to figure that out. He was able to survive for about 13 or so seconds before being forced to tap.

The arena erupted in a confused cheer before realizing that their guy had lost. Jimmy Smith and Jon Anik went crazy on commentary. And Alexey Oleynik celebrated the 11th Ezekiel Choke win of his near-70-fight career.

The choke is primarily used in grappling where the opponent is wearing a gi or kimono and is normally only used in that setting because the choke is one where the fighter doing the choke is using his own sleeve for leverage, something that you obviously cannot do in an MMA fight.

There have been two Ezekiel Choke finishes in UFC history. Alexey Oleynik is responsible for both of them. He improves to an insane 56-11-1.

Along with those three, check out 44 honorable mentions below! Also, relive the Submission of the Month from April 2018 courtesy of Tatsuya So!