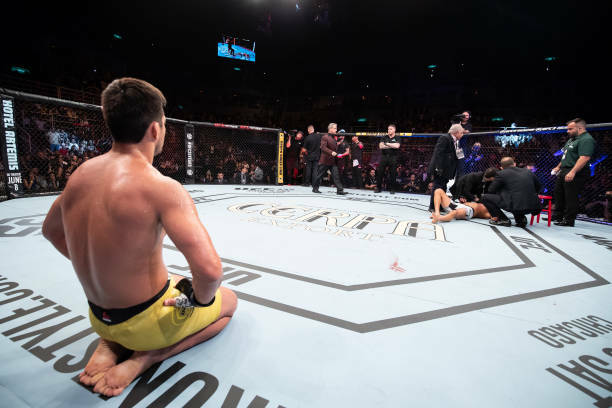 As stated in the Submission of the Month piece, May was absolutely loaded with wild finishes and fights.

From Daron Cruickshank scoring a devastating KO in Japan, to Fabio Maldonado getting slept by Nikita Krylov in Russia, devastating knockouts happened all over the globe this month.

Just like the Submission of the Month, May’s Knockout of the Month took place in Rio de Janeiro at UFC 224. So, those fans chose one hell of a show to attend.

On the main card, there was a middleweight throwback fight of sorts as two Brazilian legends went to battle. Former light heavyweight champions Lyoto Machida and Vitor Belfort took to the cage in front of all of their Brazilian faithful.

After a… less-than-stellar opening round, the Jeunesse Arena was starting to get a bit restless considering all the action they had seen earlier in the night.

But it didn’t take long for that to change. As, less than a minute into round two, Lyoto Machida landed his signature front kick right on the chin of Vitor Belfort. Knocking him unconscious on impact. The building erupted, and Machida took no time to celebrate. He instead bowed at the feet on a downed Belfort.

And that did the job. Lyoto Machida wins his second-straight. First beating a hot prospect in Eryk Anders while fighting at home, and then knocking out a fellow Brazilian legend while fighting in Brazil.

After completing his 32nd fight as a professional mixed martial artist, the karate specialist improves to a cool 24-8 as he turns down to clock to KO yet another legend with a frontkick. This – seemingly – was Belfort’s retirement fight as he left his gloves in the cage post-loss.

Machida sent another legend into retirement back in 2011 with a very similar kick, knocking out Randy Couture at the UFC’s inaugural Toronto show.

Lyoto Machida gets May 2018’s Knockout of the Month with a kick that shall be dubbed; The Retirement Kick™.

Not every knockout can be dubbed Knockout of the Month, but considering how many we have seen in the past 30 days alone, there can be a first, second, and third place!

That’s hardly all. There are tons honorable mentions to get to – all with videos! Before continuing, check out Dricus Du Plessis pick up his third consecutive title via KO in last month’s Knockout of the Month.