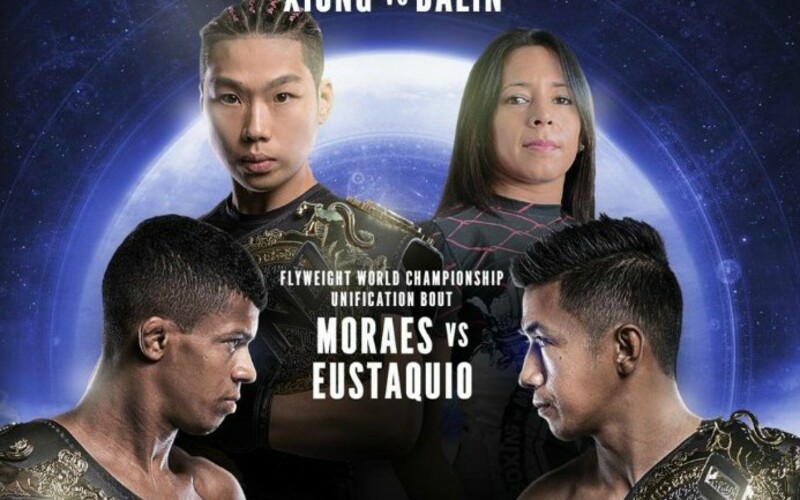 The largest global sports media property in Asian history, ONE Championship™ (ONE), has just announced the main event for ONE: PINNACLE OF POWER, set for the Studio City Event Center in Macau, China on Saturday, 23 June.

Reigning ONE Women’s Strawweight World Champion “The Panda” Xiong Jing Nan of China makes the first defense of her world title against Laura “La Gladiadora” Balin of Argentina in the evening’s headlining bout.

Ticket information for ONE: PINNACLE OF POWER is available at www.onefc.com.

“I am thrilled to announce the two title bouts that will headline ONE: PINNACLE OF POWER on 23 June. China’s top female strawweight, ‘The Panda’ Xiong Jing Nan is back and ready to defend her ONE Women’s Strawweight World Championship for the very first time against newcomer Laura Balin. Then in the co-main event is a rematch fans have been waiting for. Adriano Moraes and Geje Eustaquio, two respected world champions will face off against each other to unify the flyweight world titles. With both men looking to settle the score, only one will leave the undisputed ONE Flyweight World Champion.”

“Winning the title is one of the biggest moments of my career. I am proud to represent China on the global stage of martial arts and plan to successfully defend the belt against any opponent. Laura Balin is a worthy challenger, but the outcome of this match will be one where I am the winner.”

“It is an honor to compete for the world championship in my first appearance in ONE. I am grateful that the promotion has placed trust in my skills and talent, and will do everything in my power to take the title from the champion. I’m coming in with upset on my mind, and it’s going to be a very exciting matchup.”

“I am the champion and I am here to do everything I can to defend my title. I have faced Geje Eustaquio before, and I am familiar with his style. I know he has improved a lot since our last meeting, so I am prepared to face a different, more complete martial artist. I am training extra hard to be ready for the challenge he will pose.”

“There can only be one champion, and I believe I have what it takes to unify the flyweight titles. It’s an honor and privilege to be facing Adriano Moraes again, and I am eager to show him how much I have improved since the last time we met. I know he has evolved as a martial artist, but so have I. I am entering this bout more confident of victory than ever before.”

“The Panda” Xiong Jing Nan of Shandong, China is the reigning ONE Women’s Strawweight World Champion. With a professional record of 14-1, Xiong began her career competing in professional boxing and was inspired by her father, who imparted in her values of courage and integrity.

Featuring a wide array of skills, “The Panda” bagged a gold medal at the prestigious China Open Brazilian Jiu-Jitsu Tournament in 2017. In her last bout, Xiong figured in a grueling championship encounter against Singapore’s Tiffany Teo, winning by technical knockout in the fourth round to claim the inaugural ONE Women’s Strawweight World Championship. Up next, Xiong heads to Macau to defend her belt against Laura Balin.

Laura “La Gladiadora” Balin of Argentina is a female strawweight contender who will be making her ONE Championship debut at ONE: PINNACLE OF POWER. Balin, who competed in South America for most of her professional career thus far, will compete for the very first time in Asia.

She owns a professional record of 10 wins and two losses. Out of her 10 total victories, nine have come by spectacular finish, including five submissions and four knockouts. For Balin’s first foray in ONE, she will challenge China’s Xiong Jing Nan for the ONE Women’s Strawweight World Championship.

Adriano “Mikinho” Moraes of Brazil is a Brazilian jiu-jitsu black belt with well-rounded striking and grappling skills. He is a two-time flyweight world champion and one of the most dominant world champions in martial arts. Rarely opposed, Moraes is riding a four-bout win streak, including three wins by submission.

After recapturing the ONE Flyweight World Championship last August against Kairat Akhmetov, “Mikinho” successfully defended his title against rising star Danny Kingad last November at ONE: LEGENDS OF THE WORLD. Now, he is set to face ONE Interim Flyweight World Champion Geje Eustaquio in a highly-anticipated title unification bout.

Current ONE Interim Flyweight World Champion Geje “Gravity” Eustaquio of Baguio City, Philippines, is one of the most skilled martial artists in Asia, and a highly-decorated wushu practitioner. His solid striking and grappling skill set has led to huge victories over the course of a seven-year professional career.

Training in the high altitudes of the Philippines’ summer capital, Eustaquio hones his craft alongside his elite teammates at the fabled Team Lakay. In his most recent bout, Eustaquio thoroughly defeated former titleholder Kairat Akhmetov to capture the ONE Interim Flyweight World Championship. Known for his incredible ability to keep calm in the face of adversity, Eustaquio will look to unify the flyweight world titles when he faces ONE Flyweight World Champion Adriano Moraes.