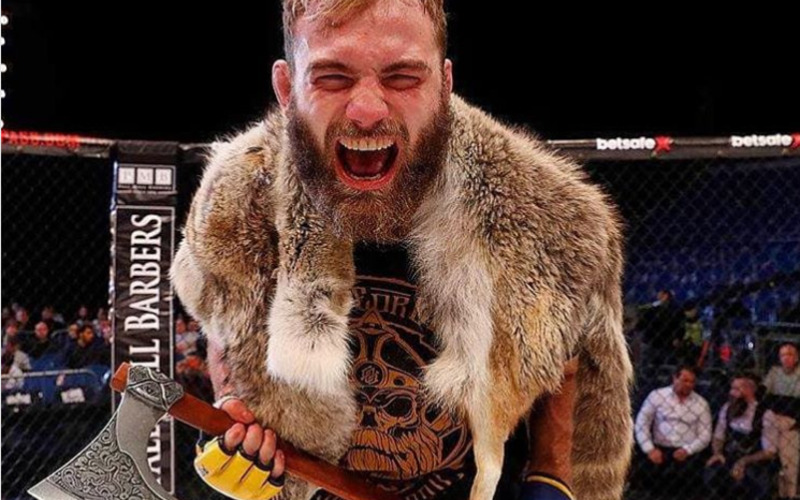 Cage Warriors has been the breeding ground for several future UFC stars with nearly 90 fighters signing with the UFC. Very few have the skill and personality possessed by that of “The True Viking” Soren Bak. Bak has set himself up nicely for a lightweight title bout in his next contest.

The Makings of “The True Viking”

“From early on I was a wrestler and we started a MMA team which would practice after the wrestlers,” Bak told MMASucka. “At the age of 14-15 my wrestling coach told me to try this new stuff [MMA.]Since then I’ve been killing it.” Bak’s journey began with team AK Rolf located in his hometown. “I need to credit my original team AK Rolf, True Vikings, and Yo in Kan in my hometown who began my career.”

Bak developed very quickly in his progression toward becoming a professional MMA fighter. “At 18 years of age I had become a coach for my wrestler, finished college, and had my amateur debut in MMA,” Bak said. “After the first fight, I took a Pro fight a week later and I was hooked.” Bak’s first professional bout came at Royal Arena 1 where he won by first-round submission against Jason Forssell.

The Move to Team Grind and Coach Ettrup

During the span of his 11-1 professional run, Bak decided it was time to switch camps to Team Grind led by Carsten Ettrup. Team Grind is located in the capital city of Copenhagen, which is the largest city by nearly a million people.

Ettrup’s background was largely in the art-form of jiu-jitsu. He started in the mid 1980’s and joined the Danish national team. Ettrup later moved into coaching and has since coached several BJJ and MMA world champions. “More recently Alfred Nassoro has been working with me on my stand up,” Bak stated. “He is the mastermind behind the knee that opened up Jacobsen.” Nassoro is a Muay Thai specialist who has been working with Bak to help balance striking with his already amazing ground game. As a result, Bak has become much more diversified in his attack.

The big Cage Warriors debut came against Scott Clist at Cage Warriors 83 in the co-main event of the night. Bak was able to get the unanimous decision victory in the bout which took place in May 2017. Just five months later Bak would return for another main card appearance, this time taking out Martin Stapleton by first round submission.

Bak’s greatest moment thus far came at Cage Warriors 93 in the co-main event, when he finished Alexander Jacobsen in round two by submission. Nassoro’s teachings were evident when Bak led the striking in the contest against “the striker” Jacobsen.

Bak caught Jacobsen with a beautiful Muay Thai knee that busted him open, it was the beginning of the end. The winner was figured to get the next title shot against champion Chris Fishgold. Fishgold would later be signed by the UFC, consequently vacating the title. This set up a chain of events leading to the biggest upcoming lightweight match in Cage Warriors history.

It is no secret Bak and former featherweight champion, Paddy Pimblett, have been going back and forth on social media. After the departure of Fishgold, it was announced Pimblett would step up in weight and face Bak for the title.

“You’re gonna see the true Viking show that I’m more dangerous on my feet than Paddy,” Bak told MMASucka. “I’ll probably have the chance to show that I’m a much better technical grappler in MMA. Otherwise, I’ll just teach the kid what Viking ground and pound means!” See Brian Gerson’s article on the announcement of the bout for Cage Warriors 96.