RIZIN 11 in Saitama gets an addition in the form of a battle between female powerhouses; Rin Nakai and Shizuka Sugiyama.

The fight was announced at a RIZIN press conference late Tuesday.

One of the most renowned female fighters in Japan, 31-year-old Rin Nakai (20-2-1) is set to make her second appearance in a RIZIN ring when she returns next month. Nakai began her career in 2006 and, for the better part of a decade, dominated the Japanese scene in both Pancrase and Valkyrie.

She began her career with a stellar record of 15-0-1, defeating the likes of Sarah D’Alelio and Tara LaRosa in the process. In late 2014 she – somewhat shockingly – signed with the UFC. Nakai dropped decisions to former champion Miesha Tate and Leslie Smith before being released in late 2016.

Since then, she has won four straight. This includes a 2016 RIZIN win against Kanako Murata.

Opposite her will be another 31-year-old in the form of Shizuka Sugiyama (16-5-1), a member of Reversal Gym Shinjuku.

A veteran of DEEP, Sugiyama is known primarily for her grappling much like Nakai. After posting a record of 3-1 in 2014, only losing in a vacant title challenge at DEEP JEWELS 4, Sugiyama took a prolonged absence from MMA.

Since returning to the sport in early 2017, Sugiyama has gone 3-1 in MMA, most recently defeating Sachiko Fujimori at DEEP JEWELS 20 earlier this month. Her only loss in the sport since returning last year came in her sole RIZIN appearance. This is where she lost to wrestling standout Kana Watanabe in December.

RIZIN 11 goes down on July 29, live from the famed Saitama Super Arena in Saitama, Japan. 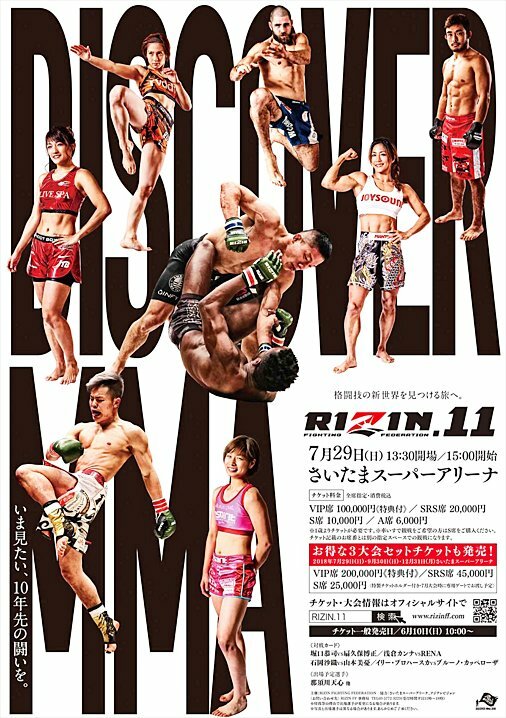