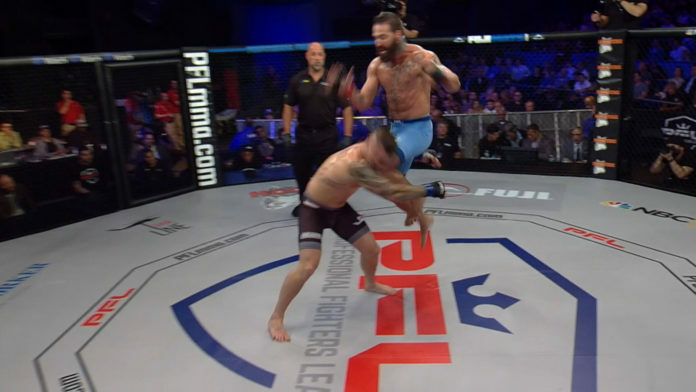 As said previously on the Submission of the Month piece, June was absolutely loaded.

From Bruno Silva upsetting Alexander Shlemenko in Russia to Curtis Blaydes elbowing multiple holes into the face of Alistair Overeem in Chicago. June was riddled with everything from 10-second knockouts and title-defending knockouts in the fifth round.

However, Knockout of the Month goes to a come-from-behind flying knee KO live from New York. 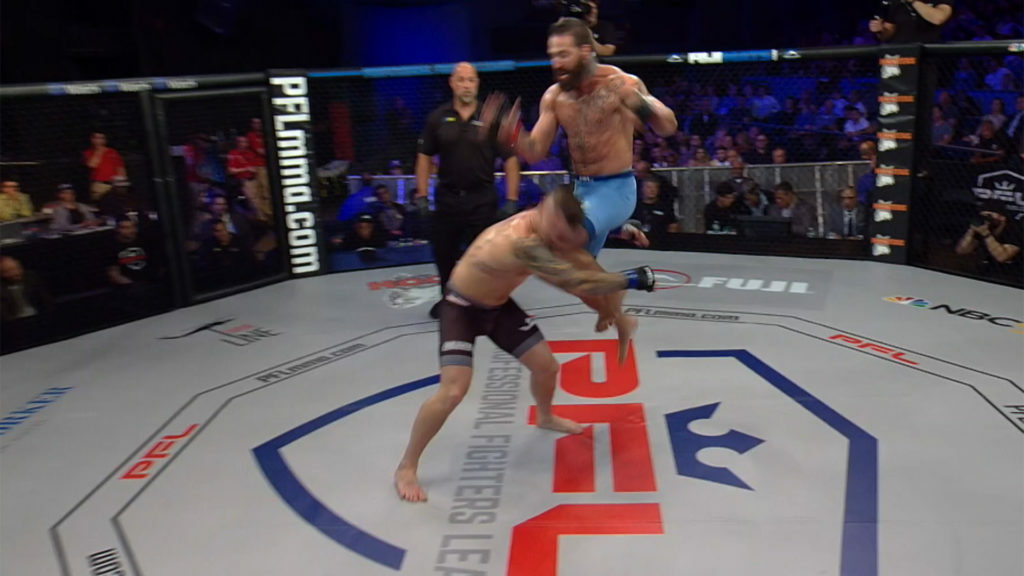 On June 7, live from the Hulu Theater at Madison Square Garden, the inaugural PFL season kicked off in New York City.

The 11-fight card featured heavyweights and featherweights exclusively, all of which were looking to get as many points as possible towards themselves in preparation for the PFL Playoffs later this year.

In a meeting of heavyweights, we saw Alex “The Spartan” Nicholson take on Jake “The Honey Badger” Heun.

It was by no means domination, but in round one we saw Heun avoid most of the power shots that Alex Nicholson has always been known to throw. To do so he used great movement and a particularly kick-heavy gameplan – at least compared to what we’d usually see from Heun, typically more of a wrestler.

Despite Heun being one step ahead of him at all times, Nicholson was not deterred. He remained on the offense through the majority of round one, eating all the counter punches and leg kicks that came his way without much issue.

However, early in round two, the tide changed.

The first 45-seconds of round two were looking eerily similar to the opening round, but with less than a minute having passed, Nicholson walked through multiple power punches of Heun. This before rushing him with a massive flying-knee that knocked “The Honey Badger” out before he even hit the ground.

Referee Miragliotta was quick to jump in, but Nicholson still had ample opportunity to strike an unconscious Heun if he really wanted to. But, to his credit, he knew it was over. And he gave us a walk-off flying-knee KO of sorts! You don’t see that every day.

The round two finish earned Alex Nicholson 5pts towards the PFL Heavyweight Rankings. This puts him in 4th place at heavyweight, only below three fighters who got first-round finishes on the same night. For reference, the top eight will advance to the playoffs.

But the regular season is not over! “The Spartan” returns vs. Philipe Lins (3pts, 6th place) at PFL 4 in two weeks. Will he get Knockout of the Month for the second consecutive month?

Now; here are the top three knockouts of June 2018! Remember, this is opinion-based. No lynching, please.

ONE Championship: Spirit of a Warrior, Title Defense

Before we get into the 40(!!) honorable mentions, check out last month’s Knockout of the Month courtesy of Lyoto Machida!