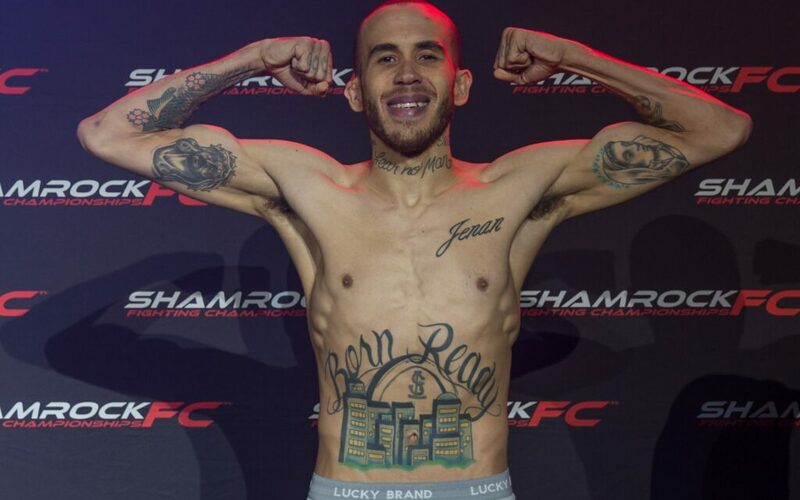 Sean Woodson (4-0 MMA) is set to resume his MMA career on Saturday when he takes on Dawond Pickney (15-10 MMA) in a lightweight main event on Shamrock FC 307.

Pickney has five times the professional MMA experience as Woodson. While “The Warrior” acknowledged that Pickney is his toughest opponent to date, the experience gap doesn’t faze him.

“He’s got 25 pro fights, here I am with just four. It’s a huge step that I believe I’m more than ready for,” Woodson, 26, told MMASucka. “He has a win over Brandon Davis, UFC veteran. A few of his losses are to tough competition. A lot of people aren’t giving him the respect he deserves.”

Woodson’s right in that Pickney has fought some stiff competition. Some of his losses have come to UFC prospect Jared Gordon, undefeated prospect Taylor Callens and Dave Burrow.

Woodson himself has a good victory over fellow Shamrock FC prospect Rashard Lovelace. He hasn’t fought since September, however, so it will be nearly 10 months.

“I’ve been sitting on the sidelines for awhile,” Woodson, who found out about the fight three weeks ago, said. “I’ve been itching and dying for a fight.”

His opportunity came when Garrett Gross, who was originally slated to fight Pickney, got a call from the UFC to compete on Dana White’s Tuesday Night Contender Series on July 31.

“I saw Gross on Facebook got that call to the Contender Series and I thought it’d be cool to step in,” Woodson said. “I didn’t even know who he was fighting.”

Gross’ opportunity to reach the UFC is something Woodson has been in hot pursuit of. He had tried out for the recently-concluded season of The Ultimate Fighter featuring undefeated lightweights and featherweights. Woodson came up short despite being one of only two lightweights to submit his opponent in the grappling portion of the tryouts and doing well with the striking.

After a weeks’ stay in Las Vegas for physicals and exams, Woodson was told that he was an alternate for the show. As it turns out, they didn’t need him. He believes that in the end, he didn’t get the nod because the UFC felt he wasn’t fit to be on a reality TV show.

“That stung pretty bad, man,” Woodson said. “Being so close to the UFC and coming up short. To be 4-0 and that close, it was a huge opportunity. It lit a fire under me after seeing the competition who made the show. I know I can beat all of those guys.”

“I see a lot of 4-0, 5-0 guys are getting that shot,” Woodson said of the Contender Series. “That’s what I’m aiming for. A win over Pickney will get me on there.”

Woodson believes he’ll accomplish that by submitting his opponent after clipping him in the stand-up.

Shamrock FC 307 goes down on Saturday, July 14, at the Ameristar Casino in St. Charles, MO. The action will be available via live stream on FloCombat.