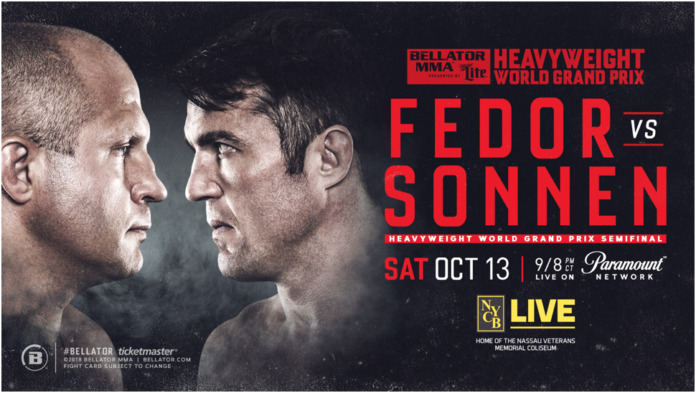 The second semi-final of Bellator’s ongoing Heavyweight World Grand-Prix has finally been given a time and place. Fedor Emelianenko and Chael Sonnen are set to throw down in October.

The bout has been confirmed since April, when “The Last Emperor” defeated Frank Mir at Bellator 198. And after some rumblings last week, the promotion has finally announced further details regarding the fight.

Always considered one of the all-time greats, it is an absolute spectacle any time Fedor Emelianenko (37-5, 1NC) enters a cage or ring to compete.

In 2012 following a three-fight win streak, Fedor announced his retirement from the sport of MMA. Considering this is a man who was virtually undefeated in 31 fights spanning 2000 to 2010, MMA fans understood his decision but were disappointed none the less.

MMA just isn’t the same when Fedor Emelianenko isn’t part of the scene, considering he was the best heavyweight in the world for a decade. By a long shot, might I add. After three years of retirement, fans were delighted when the “The Last Emperor” announced his return and signed with the brand new RIZIN Fighting Federation out of Japan, looking to relive the same glory he felt in his PRIDE FC days.

Since returning to action in December of 2015, Fedor has gone 3-1. Competing for RIZIN, Fight Nights Global, and Bellator along the way. In his most recent endeavor, Fedor decided to take part in an eight-man heavyweight grand-prix to crown a new Bellator Heavyweight Champion. He added another former UFC champion to his incredible resume in the quarter-final, starching Frank Mir in under one minute.

Opposite him will be a former elite middleweight contender and hard-nosed light heavyweight competitor; Chael Sonnen (30-15-1), a Bellator MMA commentator and former UFC title-challenger.

A grueling wrestler out of Oregon, he is most known for his pair of bouts with one of the consensus GOATs of this sport, Anderson Silva. In 2010 during Silva’s seemingly unbeatable streak, Sonnen gave the champion hell for nearly five whole rounds before being submitted with a hail mary triangle late in the fight.

After this breakthrough fight for him, Sonnen went on to fight the likes of Michael Bisping, Jon Jones, and Anderson Silva once more before leaving the UFC. Following his final UFC appearance against Rashad Evans, Sonnen was out of action for over three years before joining the Bellator roster.

While not competing in MMA, he did partake in grappling under Metamoris multiple times prior to his MMA return. “The American Gangster” is 2-1 since returning to mixed martial arts last year. This includes a quick submission loss to Tito Ortiz and two decision wins against Wanderlei Silva and Quinton Jackson, the latter being a Bellator Heavyweight World Grand-Prix Quarter-Final.

The bout headlines Bellator 208 on October 13, live from the famed Nassau Coliseum in Long Island, New York. No other fights have been announced.