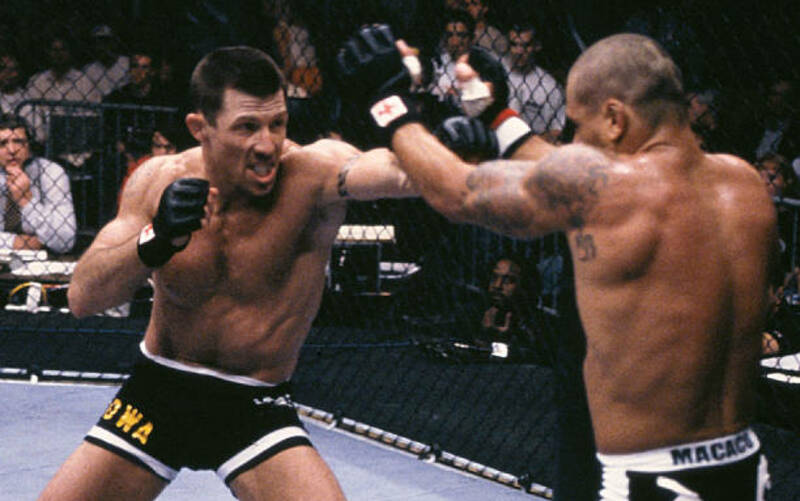 This is the 15th of a 50 part series documenting the history and the current state of MMA for each of the 50 states in the United States of America. Each part will chronicle the history of MMA as well as several notable fighters and camps in each state. States will be completed in alphabetical order. This is the history of Iowa MMA. Be sure to check out the previous part on Indiana. Follow MMASucka so you can keep up with the series.

Iowa, the 29th state to join the union, and 30th ranked state as far as population, is known for its wrestlers it has given to the world of MMA. Iowa has hosted a few events from UFC and Bellator. The state has also provided the world of MMA with one of the hardest hitting strikers at featherweight of all time and the first ever UFC welterweight champion.

The six-member Iowa Athletic Commission oversees all combat sports within the state of Iowa. Three members are from the Golden Gloves Association of America. The other three members are from the United States Amateur Boxing Federation. Iowa was one of the states that banned kicks while wearing shoes in the early days of MMA. At UFC 26: Ultimate Field of Dreams, Alex Andrade was disqualified by referee John McCarthy for kicking Amaury Bitetti multiple times with shoes. In the UFC’s 1999 visit, Iowa used the changes made by the Council of the Mixed Martial Arts Commission, which gave us many of the rules and regulations still used today in MMA.

The UFC has been to Iowa twice but it’s been over 18 years since the state has hosted the world’s biggest MMA organization. UFC 21, which took place in Cedar Rapids on July 16, 1999, was the first venture into Iowa. Most noteworthy, the Council of the Mixed Martial Arts Commission recently pasted new rules that would be implemented for the first time in Iowa. All preliminary bouts would consist of two-five minute rounds while main card bouts would be three-five minute rounds. Championship matchups were five-five minute rounds. The 10 point must system was also utilized for the first time. The card consisted of eight fights will all ending by finishes except for one of the alternate bouts. The main event saw Maurice Smith defeat Marco Ruas by corner stoppage after the first round. Home state fighter, Pat Miletich, defeated Andre Pedeneiras by doctor stoppage TKO.

June 09, 2000 would see the return of the UFC to Iowa. It would also be the last visit as of now. UFC 26: Ultimate Field of Dreams took place at the Five Seasons Events Center in Cedar Rapids. Aside for the previously mentioned kicking with shoes disqualification, this event is also significant for the state of Iowa in relation to MMA as being the first event to feature the bantamweight class. The class would be made up of 155 pounds or less. The UFC consisted now of four weight classes; bantamweight, lightweight, middleweight, and heavyweight. Jens Pulver defeated Joao Roque by unanimous decision in the first ever “bantamweight” bout in UFC history. The Iowa crowd witnessed two title fights. Kevin Randleman defeated Pedro Rizzo in a five-round decision while Pat Miletich submitted John Alessio in the second round to retain his lightweight crown.

Bellator’s Visit to The Hawkeye State

Bellator’s first visit to Iowa came over 13 years after the UFC’s last visit. Bellator 104 took place in October 2013 and featured a four-fight main card with two of those being the welterweight semi-finals. Ron Keslar defeated War Machine by first round submission. Rick Hawn won his side of the bracket defeating Brent Weedman by unanimous decision. The card also featured Kendall Grove on the main card as well as Rob Emerson and Karl Amoussou on the prelims.

Bellator’s most recent of its three visits to Iowa came in October 2014 with Bellator 129: Neer vs. Bradley. The main event featured Iowa native Paul Bradley defeat fellow Iowa native Josh Neer by unanimous decision. Houston Alexander also competed, getting a majority draw with Virgil Zwicker. Alexander lost a point of headbutting, resulting in the draw. As a result, the two would rematch at Bellator 132, this time with Zwicker winning by split decision. Since the draw at this event, Alexander’s record is 1-6. Current UFC light heavyweight star, Anthony Smith competed on the undercard at middleweight defeating Brian Green by unanimous decision.

Iowa is known for its amazing wrestling programs. Despite this, Iowa has contributed quite a few stars to the world of MMA. Current top rated featherweight Jeremy Stephens grew up in Iowa and became friends with fellow Iowa MMA fighter Josh Neer. Most notable would have to be UFC Hall of Famer Pat Miletich. Miletich compiled a professional record of 29-7. He is mostly known for being the UFC’s first welterweight champion and defended the title four times successfully. He is also known for the creation of Miletich Fighting Systems, an MMA academy located in Bettendorf, Iowa. The team has been the home to over 11 MMA champions most notably Matt Hughes, Tim Sylvia, and Robbie Lawler.

“The Boogyman” of Iowa

PFL light heavyweight, Rakim “The Boogyman” Cleveland, fights out of the state of Iowa with a professional record of 19-9-1. Cleveland is tied for third with four points through one fight in the PFL regular season. Cleveland won by doctor stoppage just before the end of the third round defeating Rashid Yusupov. His next contest will be against Maxim Grishin at PFL Event #5.

“The fans in Iowa are very loyal. They love the fighters and support the sport to the fullest,” Cleveland told MMASucka. “The growth of Iowa MMA and the talent that has come from Iowa and the upcoming talent are due to the love of the sport and the high-level wrestling programs that keep producing all throughout the start. It’s always cool to see guys you know and have worked with making it and the fans show that in a way of supporting the guys and girls all over the map whether it’s a local fight or another state!”

Part 16 of the 50 states series will be the state of Kansas. Check back with MMASucka to keep up with the series.