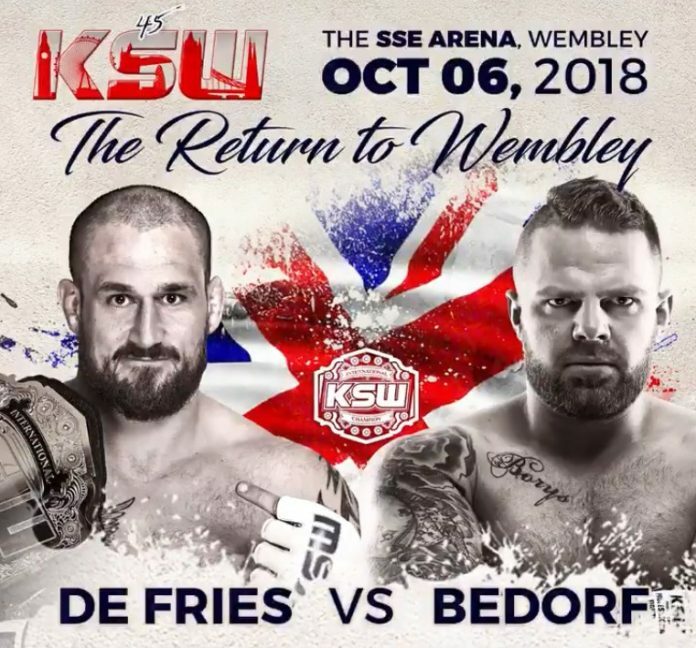 KSW is slated to make their return after month’s away this coming October, and to do so they head back to Wembley with a heavyweight title clash.

Phil De Fries will make the first defense of his heavyweight title as he faces KSW mainstay and former champion Karol Bedorf.

KSW announced the bout on Friday.

The heavyweight title is on the line in London! #KSW45??

England’s Phil De Fries (15-6, 1NC) seems to have really begun living up to his potential over the past few years. After starting his career a perfect 7-0 on the UK regional scenes, De Fries went on to have spotty runs in the UFC and Japan. Fighting the likes of Matt Mitrione, Stipe Miocic, and Brett Rogers.

In recent years, De Fries has gone on to compete in Russia, Bellator, M-1 Global, and even returned to the UK to fight for M4TC. “F-11” is currently riding a three-fight win streak, this includes wins in Bellator MMA and M-1 Global.

He followed up those aforementioned wins in his most recent outing, debuting for KSW and fighting a streaking Michal Andryszak.

In a bout that seemed primed to have Andryszak capture gold and continue his streak of devastation under the KSW banner, Phil De Fries pulled the upset and scored a first-round TKO at KSW 43 in April. Thus winning the vacant strap and becoming new KSW Heavyweight Champion.

Whereas De Fries enters the fight with one fight under the KSW banner, his opponent has fought exclusively for the Poland-based organization for nearly a decade.

Debuting at KSW 8 in 2007, Karol Bedorf (15-3) is as well-tenured as heavyweights come in the promotion. He debuted in a one-night tournament, winning his quarter-final bout and losing to Alexey Oleynik in the semi-finals that same night.

After the loss, Bedorf returned to the regionals for a few outings before returning at KSW 12 and never looking back. A 4-1 run led him to a title shot in 2013, here he defeated Pawel Natsula via TKO to become the KSW Heavyweight Champion.

The Polish heavy-hitter held the title for three years, and after multiple dominant performances and incredible finishes over the period, went on to lose the title to Fernando Rodrigues Jr. in a monster upset.

KSW 45 is slated to go down on October 6, live from the SSE Arena, Wembley in London, England. The event will – fittingly – be dubbed “KSW 45: The Return to Wembley.”

No other bouts have been confirmed but as previously reported, Popek Monster, Scott Askham, and Damian Janikowski are names that can be expected for the show.