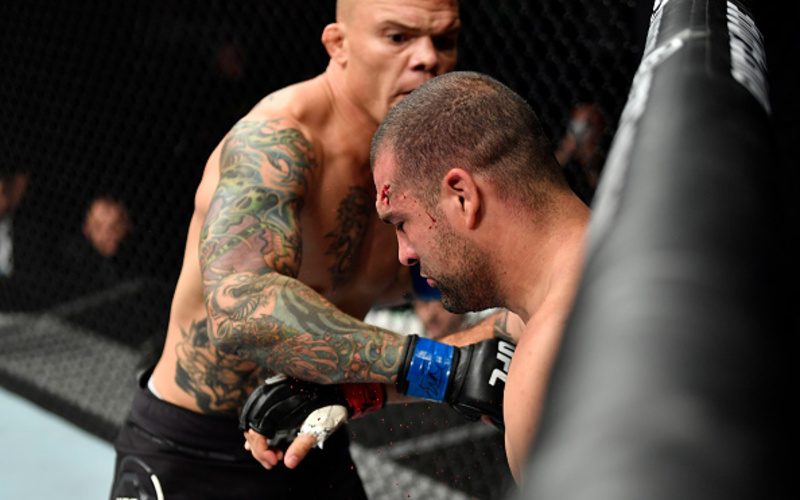 The UFC just made their second trip to Hamburg, Germany on Sunday. Hamburg played host to UFC Fight Night 134 as the main event featured two heavy-hitting light heavyweights. Legendary Pride fighter and former UFC light heavyweight champion, Mauricio “Shogun” Rua, took on knockout artist Anthony Smith in the main event. High stakes were on the line as a win could have put Shogun next in line for a title shot. As for Smith, it was his opportunity to spoil that chance for Rua and shoot up the rankings at 205.

In the co-main event, Glover Teixeira took on a short notice replacement, Corey Anderson. Anderson utilized his wrestling to the fullest during that fight resulting in a win for the Illinois native. This win came by unanimous decision, which was also the ninth straight decision and tenth overall.

The card did not really deliver. More than 80% of it went the distance, and not in an exciting way. But, with that being said, there were still some fighters that performed very well. Now, it is time to look at those very fighters and list the Standout Performances. In order for a fighter to make this list, their performance must stand out among their peers. This could be quick finishes, flashy knockouts, great submissions, dismantling an opponent, or providing an all-around exciting fight. So, without further ado, let’s get to it.

Anthony Smith def. Mauricio Rua via Knockout (Punches) at 1:29 of Round One 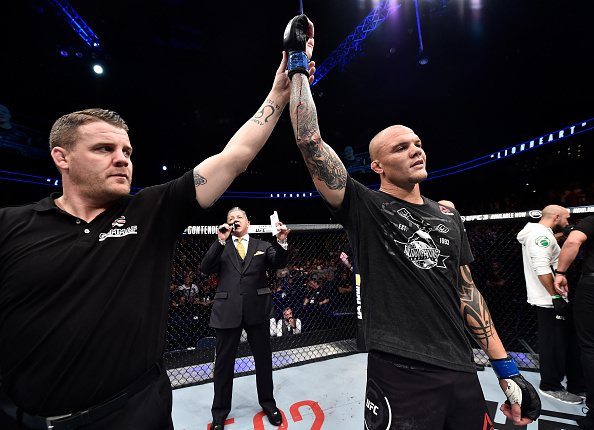 HAMBURG, GERMANY – JULY 22: Anthony Smith celebrates after his knockout victory over Mauricio Rua of Brazil in their light heavyweight bout during the UFC Fight Night at Barclaycard Arena on July 22, 2018 in Hamburg, Germany. (Photo by Jeff Bottari/Zuffa LLC/Zuffa LLC via Getty Images)

The legend that is Shogun Rua was making his return to the octagon after nearly a year and a half away. When Shogun last stepped foot in the octagon, the day was March 11, 2017, as he faced Gian Villante at UFC Fight Night 106. Rua finished that fight in the final round as he ended it by TKO just a minute into the third round. This was his third straight victory as he looked to get back to the title he lost to Jon Jones.

The next fight to get him to the title was scheduled a year later, against the most recent man to lose to current champion Daniel Cormier. That man was the second-ranked light heavyweight in the world, Volkan Oezdemir. That fight was scheduled for UFC Fight Night 129, however, it was moved to headline UFC Fight Night 134 due to visa issues on Oezdemir’s side. Unfortunately, Oezdemir was removed from the contest a couple weeks earlier to take on Alexander Gustafsson at UFC 227. This opened the door for Anthony Smith to step in.

Anthony Smith had just made his debut at light heavyweight at UFC 225 when he took on former champion, Rashad Evans. That fight ended in under a minute as a hard knee handed the legend his fifth straight loss. Now, he was getting the opportunity to face another legendary former champion in hopes to break into the top ten at 205.

The fight started and Shogun was doing a lot of pressuring. He was moving forward, forcing Smith to back up towards the fence. Shogun wasn’t throwing very many shots, but Smith was very active as he moved backward.

As he was moving backward, Smith was doing damage. At one point he even landed a front kick to the face of Rua as he closed in.

This would then be followed by the fight-ending sequence. Smith connected with a combination that wobbled Rua and Smith could smell blood. He moved forward, looking for the kill. He landed multiple combinations before Rua’s back reached the fence. Once he’d backed his opponent up as far as he could, Smith connected with an elbow that seemed to put Rua out on the feet. This was then followed by a couple hard punches that sent Rua collapsing to the mat.

Manny Bermudez def. Davey Grant via Submission (Triangle Choke) at 0:59 of Round One 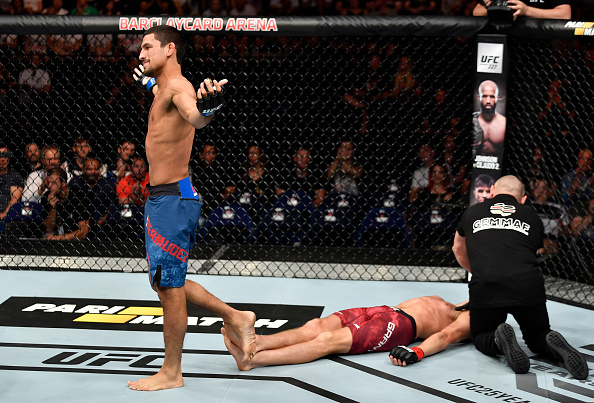 HAMBURG, GERMANY – JULY 22: Manny Bermudez celebrates after his submission victory over Davey Grant of England in their bantamweight bout during the UFC Fight Night at Barclaycard Arena on July 22, 2018 in Hamburg, Germany. (Photo by Jeff Bottari/Zuffa LLC/Zuffa LLC via Getty Images)

Manny Bermudez was scheduled to take on Davey Grant at UFC Fight Night 130 earlier this year. However, Grant was diagnosed with a staph infection and was forced out of the fight. Fortunately for both men, the fight was rescheduled for the UFC’s visit to Germany.

Entering this fight against Grant, Bermudez was coming off a successful UFC debut against Albert Morales. That fight took place at UFC on Fox 28 and Bermudez came out of that fight with a submission win by way of guillotine. That submission made it nine in his career. He looked to get his tenth career submission and fifth straight submission against Grant.

Davey Grant was entering the octagon for the first time since UFC 204 in 2016 when he took on Damian Stasiak. He lost the fight that night as Stasiak went on to finish Grant with an armbar. Grant looked to get just his second win in the UFC with a win over Bermudez.

As the two met in the middle, Grant was using a lot of kicks to open things up. He was connecting with some leg kicks and he threw a couple head kicks here and there. But just twenty seconds into the fight, Bermudez landed a right hand that dropped Grant.

Bermudez immediately got on top of Grant and took top mount quickly. From there, he begins to try to lock up a triangle choke in top mount. It didn’t take long as he was able to lock it up, even while Grant was rolling around, attempting to escape. Once Bermudez got it locked up, Grant went out quickly and the fight was over.

Darko Stosic def. Jeremy Kimball via TKO (Punches) at 3:13 of Round One 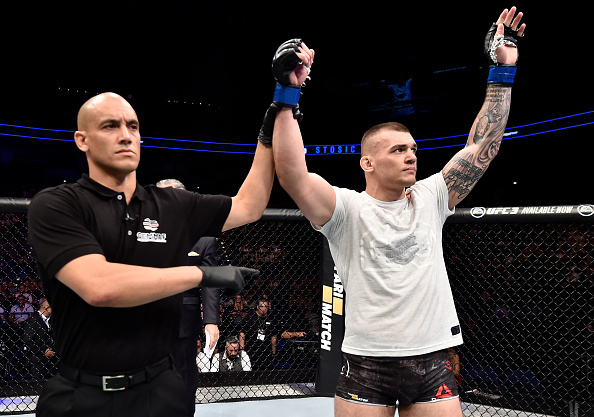 HAMBURG, GERMANY – JULY 22: Darko Stosic of Serbia celebrates after his TKO victory over Jeremy Kimball in their light heavyweight bout during the UFC Fight Night at Barclaycard Arena on July 22, 2018 in Hamburg, Germany. (Photo by Jeff Bottari/Zuffa LLC/Zuffa LLC via Getty Images)

Coming into this fight, Jeremy Kimball had gone 1-2 in his first three UFC fights. He most recently took on rising light heavyweight, Dominick Reyes at UFC 218. He lost that fight by first-round submission by way of rear naked choke. Kimball entered his fourth UFC appearance looking for a much-needed win.

The man standing across the cage though was a product of MMA legend, Mirko Cro Cop. That man was Darko Stosic who was entering his UFC debut after going 12-1 outside of the promotion. Out of that record, he has only gone the distance four times as he’s finished seven by way of KO/TKO and one by submission. He looked to go and finish Kimball early for a successful UFC debut.

The fight began with a touch of gloves and Kimball was much more active than Stosic. Kimball was moving forward, throwing faints and leg kicks and landing some good punches. Kimball even landed a good head kick at one point that caused some redness on Stosic’s head. But Stosic was also being very calm and patient as he was able to move out of the way of a lot of Kimball’s shots. And when Stosic did throw, he threw with power, landing a hard right hand at one point.

Just about thirty seconds after this moment, Kimball shot in for a takedown attempt. Stosic easily defended and reversed it, ending up on top. From there, Stosic found an opening to land some ground and pound, and he landed a lot. Kimball began to cover up and the ref was forced to stop the fight, awarding Stosic the TKO win in his UFC debut.

UFC Fight Night 134 is in the books, and with that, we look forward to what is next. Next up, we will see one of the most anticipated rematches in a long time. Eddie Alvarez and Dustin Poirier will run back their UFC 211 no-contest in the main event of UFC on Fox 30 in Calgary, Canada. There is a lot on the line as the winner should be next in line for a title shot in the lightweight division. Keyword there is should as we don’t know whether or not Conor McGregor will return to face Khabib Nurmagomedov anytime soon.

But also, in the co-main event, we will see former featherweight champion Jose Aldo in his first non-title fight since 2009. He will be taking on the heavy hitting knockout artist, Jeremy Stephens. And, the former strawweight queen returns to action for her first non-title fight since 2015 as she takes on Tecia Torres. So join me next week as we look back on what should be an exciting night in Calgary to determine the Standout Performances from Canada.