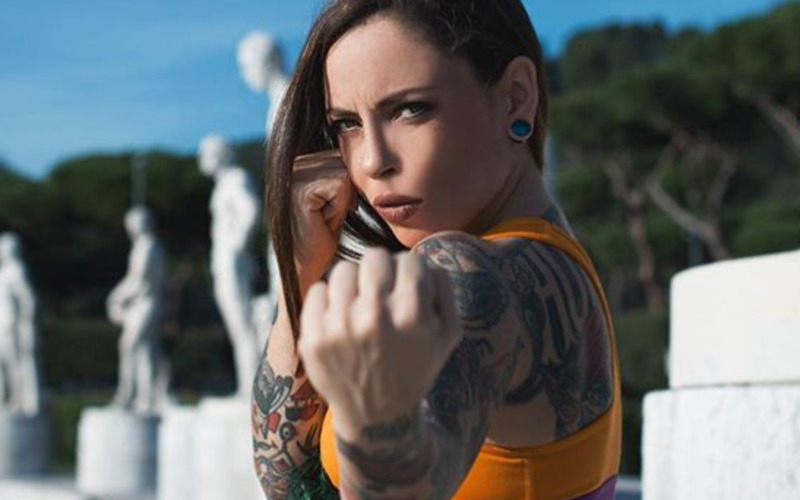 The world of women’s MMA is ever growing since the boom of fighters such as Gina Carano and Ronda Rousey. One country is starting to produce more and more talent to showcase on the world stage. Italy’s Micol DiSegni has all the makings of becoming Italy’s next big thing.

How You May Recognize Micol DiSegni Now…

If you have ever checked out the Suicide Girls, there is a chance you saw DiSegni, better known as Eden. She has been a model for Suicide Girls since 2007 and has over 25,000 followers on the site.

Since becoming a professional fighter in 2015, DiSegni has had to balance her fighting and her modeling. “I usually plan my photo shoots right before my fights so I’m in the best shape possible and no bruises,” DiSegni told MMASucka. “I’ve learned to transform my black eyes and swollen lips into my makeup style.” Smiling, she added, “I can easily turn a black eye into a smoky eye.”

…And How You Will Know DiSegni in the Very new Future

DiSegni stumbled upon MMA. After getting her first taste, she was hooked. “I started training just to stay fit and I was having so much fun that I decided to go to the gym every day,” DiSegni stated to MMASucka.

“After my first grappling competitions, I wanted to try amateur MMA and in a year I’ve arrived to win the IMMAF world championships in Las Vegas in 2015. That’s when I realized that fighting was all I wanted to do in my life.” DiSegni defeated Sweden’s Anja Saxmark in the finals of the 125lbs flyweight division to earn the gold medal.

Training and Stepping Up to the Next Level

Lorenzo “The Borg” Borgomeo is currently DiSegni’s coach and has helped her develop her skills over the years. “My coach Lorenzo Borgomeo changed me as a woman and as a fighter. He gave me the confidence to pursue my dream and he took my training to the next level” DiSegni stated. DiSegni makes her home at Gloria Fight Center located in Rome, Italy. The gym is also home to UFC middleweight Alessio DiChirico. He is currently 3-2 in the UFC winning his last two in a row. Carlo Pedersoli, who won his UFC debut in May 2018, also trains alongside DiSegni at Gloria Fight Center.

Professional Career and the Next Big Step

After claiming the gold medal at the 2015 IMMAF championships, DiSegni decied it was time to turn pro. Her professional debut came less than three months after winning the gold. She took on Danella Eliasov at EFC Worldwide 44. DiSegni controlled the contest and earned a unanimous decision victory for her debut.

In her second bout in June 2016, she would take on Shana Adrienne Power in her home country of South Africa for EFC Worldwide 50. Power received the unanimous decision win. That did not stop DiSegni as she took about a year off to refocus. She came back with a win over Anastasia Gornostaeva at Magnum FC 2 in July 2017. DiSegni turned the corner after her defeat. After the decision win over Gornostaeva, she won her next three bouts, all by stoppage.

This has set up DiSegni for her huge opportunity to compete at Cage Warriors 97 as she will take on Cory McKenna on September 29, 2018, in Wales. DiSegni seems more than ready for her huge opportunity under a big spotlight to showcase her skills. “This sport is all about taking chances and I’m always ready and in weight, so I can accept short notice fights,” DiSegni stated. “I was already in camp for a fight that got canceled when I got offered the Cage Warriors fight. I’m ready to fight tomorrow. We don’t get ready, we stay ready.”