MMASucka’s Submission of the Month for July 2018: Ariel Sexton taps Shimoishi with a beautiful double submission 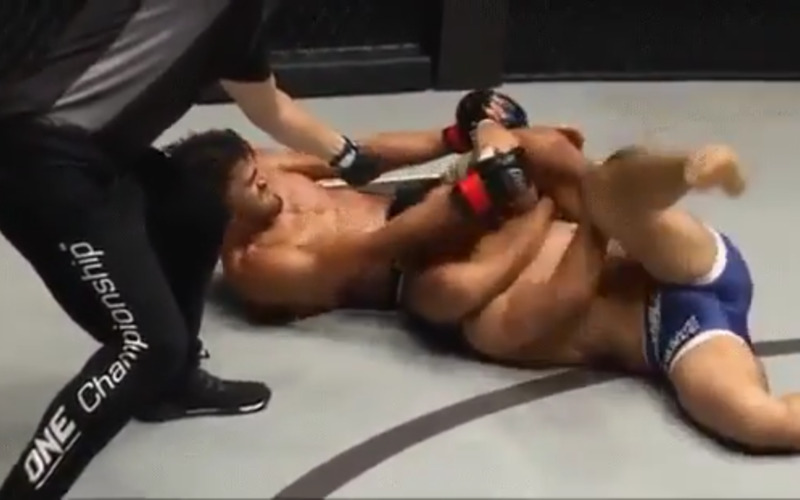 Simply put, July 2018 was a loaded month in combat sports.

Every other day it seemed like we saw a contender for submission of the month. The month started out in Japan with Shooto and Pancrase, and over the course of the month, we saw contenders everywhere from Canada to Indonesia.

From the UFC and Bellator to ICE FC and 864 FC, we saw incredible stuff throughout multiple organizations in July.

A few stand out from the others, however. And at the top of that list is Canada’s, Ariel Sexton. Before you continue, check out the Submission of the Month for June 2018!

A veteran of TUF 12, Ariel “Tarzan” Sexton has undergone a bit of a career resurgence since signing with ONE Championship a few years ago.

After a somewhat controversial loss to Ev Ting earlier this year, Sexton looked to rebound in mid-July against Kota Shimoishi. This was fresh off Shimoishi’s run in ROAD FC, where he made it to the semi-finals of the promotion’s $1 Million Lightweight Tournament.

After a competitive opening two rounds, Sexton forced Shimoishi to tap in the third round. And he did so spectacularly.

Sexton locked in a reverse triangle while simultaneously working the arm of Shimoishi with a beautiful keylock/americana. The double submission forced the tap, which is nothing to sneeze at. Because Shimoishi is a solid grappler.

“Tarzan” rebounds from Ting loss, and has officially won four of his last five, with three of those four wins coming by way of very nice submission. His record improves to 12-4, and he is one of the very best lightweights ONE has to offer.

The sick double submission win – against quality opposition in the form of Kota Shimoishi – made this one the perfect storm. The second it went down July 13, I knew this would go down as Submission of the Month. Watch the fight here!

Let’s take a look at the top three submissions of July 2018.

Featuring Sexton, a rare hammerlock dubbed “The Passion Lock,” and the first submission loss of Jared Rosholt’s career. All subjective, of course! This will be followed up with an extensive list of honorable mentions.

ONE Championship: Pursuit of Power

ONE Championship: Reign of Kings

There’s our top three, but we still have 41 honorable mentions to get to!