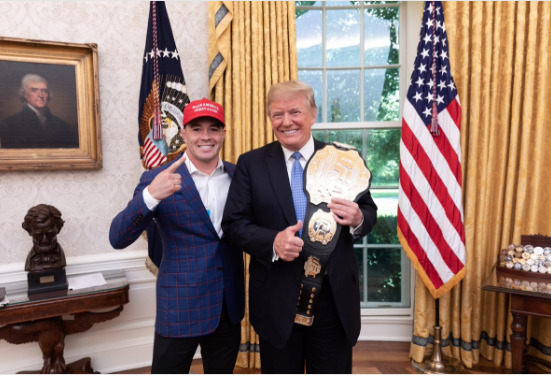 Prior to winning the interim belt against Rafael dos Anjos at UFC 225, the outspoken Covington said he would make a trip to Washington, D.C. to hand the belt to President Donald Trump. And that he did.

Taking into account all angles of this very interesting White House trip, MMASucka.com has decided to have a debate. Many staff members have mixed feelings, so we have elected to put pen to paper and let it be known as to whether this visit to the nation’s capital was a good thing for the UFC or not.

Is Covington-Trump good for the UFC or not?

This is a touchy subject. I am Canadian, not directly affected by Mr. Donald Trump, however, I watch the news on a daily basis and his name does pop up each and every day. So does the fact that Covington made this trip do something for the UFC? Yes, of course, it does. It gets different eyes on the sport. This was not just the champion in the Oval Office, the UFC President Dana White also made an appearance. He posed for a picture with Trump at his desk and the championship belt in front of them. Will this get a retweet or a post from the President? Who knows, but if it does, then this could be a giant move from a promotional standpoint for the UFC. I understand that there are other things to look at, but from my standpoint, this is not a bad thing.

Colby Covington’s visit to the White House marks the first step in WME’s new vision for the UFC as a promotional giant.  Rather than throwing up a vignette with bald men angrily screaming at a camera about how much of a “monster” [insert fighter here] is and calling it promotion, this new direction involves appealing directly to a fighter’s base.

Covington’s twitter trolling and repetitive, brute-force argumentation style align perfectly with President Trump’s style, making this pair a match made in MMA heaven.  Though some would aim to keep divisive political opinions out of our favorite sport, MMA has long been saturated with Neo-Nazi’s, ruthless dictators, and Russian oligarchs, so this little foray into politics is par for the course.

If there is any intersection between MMA fans and Trump supporters – and you absolutely better believe there is – WME would be foolish not to capitalize, and Colby Covington is the right man for the job.  After all, UFC championship fights have never been decided by popular vote.

Being in the South I know how touchy a subject politics can be for Americans. Generally speaking, I feel anything short of death is good news for MMA. For being a niche sport, I feel the saying, “you may like me, you may hate me, but you WILL talk about me,” could be a positive spin for MMA. If it gets people talking MMA and turns on more fans, then this could be a very successful P.R. move.

The UFC made a major mistake yesterday, by giving Colby Covington the wrong promotional platform to meet the president of the United States. What they did instead was borderline robbery and robbery not only out of Covington’s pocket but their own.

It is easy to forget how the Colby Covington persona came about. Just as it is easy to blame others for failure, many put the emphasis of hatred upon the fighter himself. Which is not entirely fair. There is a clear difference in his demeanor between his interactions with media and fans before and after the Demian Maia fight. Before he still had a loud style but it was infantile compared to now. As his level of intensity increased, so did the stakes of the matchups. It is entirely possible he created this persona to capitalize on the current climate of promotion in the sport.

The buy-rate for UFC 225 is estimated at around 250,000, a respectable number. A buy-rate of 250k is not totally representative of the draw Covington brings but it is an insight. As the co-main event on such a card, one could surmise a card which he headlined would do bring a similar number barring something extraordinary.

Something extraordinary, like support from one of the most polarizing figures in the United States, the president. Almost like a picture, or a video of Covington walking into the oval office and placing UFC gold on his table.  That will never happen because instead, Dana White took that exact picture. The exact picture that Covington painted to media and fans alike for a good portion of the time.

Is Dana White a UFC champion? What purpose does it serve for White to have taken that photo? I can answer the former but not the latter.

Because MMA is still a niche sport, major exposures to the mainstream can have a significant effect. There are many in the public today who may only know about mixed martial arts as a byproduct of the infamous Mayweather-McGregor spectacle.

Personally, I do not want potential fans jaded by the UFC President’s close ties to Donald Trump. A fighter in the white house sporting a “MAGA” hat could give an even more unsightly impression. Enemies of Trump are quick to dig up dirt on anyone who associates with him. For Colby Covington, that’s not hard to find.

As a bit of a hipster, part of me doesn’t care if MMA is mainstream and accepted publicly. But as a human, I care about the fighters, for their voices to be heard and for them to get payment and treatment that they deserve. Without the public eye, anti-labor and greedy practices may continue unchecked.

If you consider the UFC to be defined by the fighters it employs, this hurts the UFC.

I believe that any hardline stances in today’s political climate are consequential for public figures. While Hillary Clinton won the popular vote, the percentage was close to 50/50. With numbers so close and each side being extremely passionate, remaining publicly neutral is your safest bet.

NFL players butting heads with President Trump has arguably caused a drop in football ratings. If the media takes off with this ‘UFC in The White House’ story, I believe it will be detrimental to the company.

UFC President Dana White and Colby Covington visiting President Trump is one of, if not the biggest moves in MMA. The UFC has now visited the White House for the first time with one of its most controversial fighters in Covington.

In the process, it will bring up MMA in terms of viewership and general attention in a time where sports like the NFL are being criticized. Covington will become “America’s Fighter” because of this if he keeps winning.

Let’s get some other opinions from within the MMA world.

A manager and media members’ perspective

And Thomas Jefferson can only watch in silent horror. https://t.co/nM9c5LT95D

Colby Covington might be getting stripped of his UFC interim title next month, but meeting Donald Trump and presenting the U.S. President his championship belt is a good thing for MMA. Of course, Trump is a controversial president, so many people won’t support Covington for the sole reason that he’s a Trump supporter. But suddenly, more people than ever before know who Covington is — maybe now “Chaos” will pass 50,000 followers on Twitter. Bad publicity is better than none, and that’s the situation we’re probably looking at here.