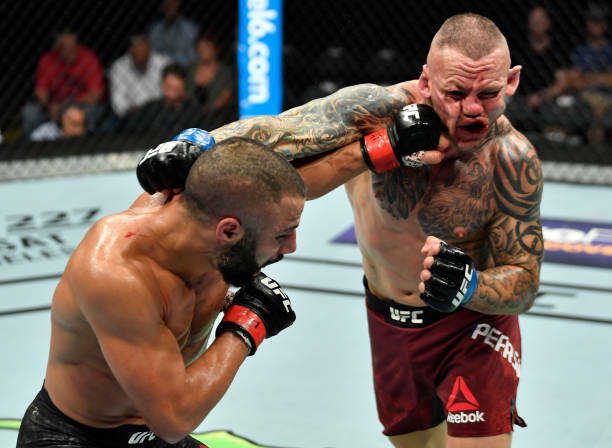 Typically when it comes to fight of the month, there is always one – maybe two – obvious standouts at the end of-of each month.

Last month it was Aung La Nsang vs. Ken Hasegawa, in May it was Angela Lee vs. Mei Yamaguchi, in April it was Dustin Poirier vs. Justin Gaethje. You get the picture.

This wasn’t the case for July, however. Looking at the month as a whole, there was really no legitimate standouts as far as purely a fight is concerned. That’s not to say July lacked action, though. As typically even though there is a standout in any given month, there is not a whole lot of honorable mentions.

That is the opposite situation this month. There is a ton of honorable mentions and great action ahead. In one of the final big shows of the month, the UFC returned to Canada, bringing a stacked FOX show to Calgary, Alberta.

It was a loaded card, but buried on the Fight Pass prelims was an absolute barnburner featuring two long-tenured lightweight veterans.

When it comes to excitement, these are two guys you can always rely on.

Canada’s own John Makdessi makes it his main mission every time he steps inside the cage to excite people. He has always brought with him a flashy kickboxing base, not afraid to throw spinning techniques.

Opposite him was England’s Ross Pearson, a hard-nosed boxer with a knack of putting on thrillers – regardless of the outcome.

Longtime fans of the sport know what these two are capable of, and on fight night, it seemed kind of surreal that these two hadn’t met in the past. Two fringe top-fifteen guys who have been in the UFC for the better part of a decade. Makdessi making his promotional debut in 2010, and Pearson making his one year prior after winning TUF 9.

The two were destined to meet one day knowing full well they would deliver a Fight of the Night. That just so happened to come on July 28, 2018.

MMASucka’s Fight of the Month for July 2018: John Makdessi and Ross Pearson go to war in Calgary

We saw a fairly technical and competitive contest early. Makdessi utilized a nice jab throughout and worked in some leg kicks as well. He scored a ton early, but Pearson is known for his toughness and he was content to throw right back.

The tight striking of Makdessi continued in round two. Good in-and-out movement, head movement, a stiff jab, and leg kicks. But, again, Ross Pearson continued to throw back and mid-way through the second round the two started to get into some crazy exchanges on the feet.

Pearson began to really put the pressure on Makdessi, and he started to land some nice punches. But Makdessi was still tagging the Englishman with some heavy shots. Pearson was able to connect on a few nice left-hands as well as a piston straight-right, but the Canadian was able to land better strikes and more often.

Round three is when the chaos begins to unfold. Both men, but Makdessi in particular, got off the stool to enter the final round with some type of renewed energy it seems because both started out fast.

It is blatantly obvious that Pearson knows – or at least feels – that he is down on the scorecards after two. As he is bringing it to Makdessi in this third round. Constantly moving forward, connecting on another powerful left-hook, the TUF 9 winner is looking to take it to the Canadian in front of a hot Calgary crowd. He’s getting tagged in the process by the precise and surgical strikes of Makdessi, but that’s not stopping him.

It is somewhat concerning at how well Pearson is eating the shots Makdessi is throwing at him. Because he’s getting hit with an abundance of shots as he tries to pressure Makdessi. The Canadian may not be known for his punches as much as he is his flash, but he showcased some nice boxing technique here. Putting it together well with his movement and kicks for a truly complete performance.

Pearson knows this, and he is wearing the damage on his face because of it. But he continued to pressure Makdessi throughout round three. Mixing up the odd leg kick with a nice jab, left-hook, and right-straight when he was within range.

With 90-seconds remaining in the fight, the two just brawled. That’s it. No breakdown. A bloody Pearson brawled with Makdessi. The Canadian has looked far cleaner tonight on the feet, but even as the fight comes to a close Pearson refuses to not go for it.

It was a truly strong showing by John Makdessi. Even in a war, he is able to pick dangerous strikers like Ross Pearson apart with relative ease. But credit where it’s due, what a gutsy performance by Pearson.

The pace both showed for fifteen minutes is nothing to sneeze at. Some people criticize the chin of Pearson, but you can not criticize his heart. Nor Makdessi’s. Great fight that was, sadly, buried on UFC Fight Pass.

It did the job, though. It woke up the Calgary crowd before the great card that was ahead of them. And from this point on, thanks to John Makdessi and Ross Pearson, they were into all the action.

What a fight. What a war. And what a performance.

Here are the top three fights of the month. Featuring two rematches with massive implications.

As mentioned above, there was no shortage of great fights this month. Look no further than these 30 honorable mentions!