Five Must Watch Fights of RIZIN 12 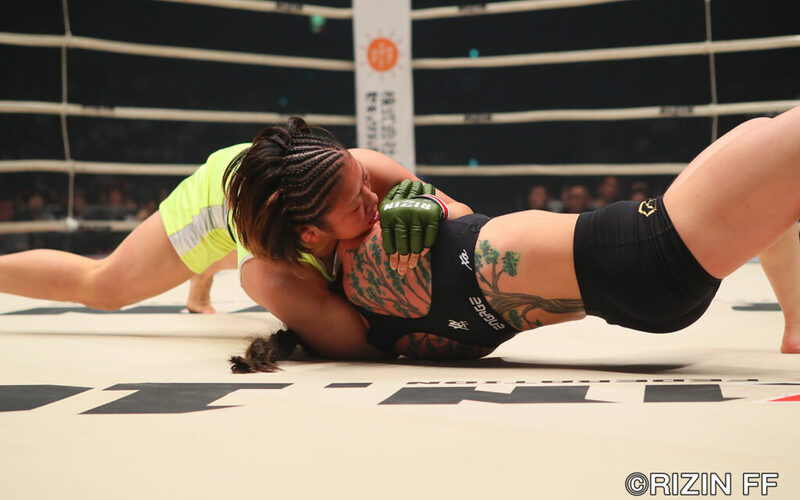 If it feels like we just exited RIZIN fight week, that is because we literally did. But, thanks to RIZIN 12, we’re right back at it.

RIZIN Fighting Federation takes over the Dolphins Arena in Nagoya, Japan this weekend.

The card they bring with them is a fun one that should produce some bangers. But, at least on paper, it is not anywhere near as loaded as the previous RIZIN 11 card. Back in Saitama, we saw some truly fantastic showings from some of the sport’s finest in what wound up being one of the best shows of 2018.

If RIZIN 12 is half the show RIZIN 11 was, we’re in for an incredible night of mixed martial arts action. But, as previously mentioned, this show lacks the name-value. This doesn’t mean there is not a stellar line-up of fights.

The card will feature 11 fights total, this includes both MMA and kickboxing match-ups. There are some hidden gems on this card that we will cover here.

Before continuing, check out what I named the Five Must Watch Fights of RIZIN 11. Because, if I do say so myself, I nailed it in retrospect.

At 37-years-old, Strasser Kiichi (19-7-2) may be getting up there in age, but in his last outing against fellow “old lion” Satoru Kitaoka, he looked better than he had in a long time.

This, of course, came after he completed a nearly four-year stint in the UFC that saw him compile a record of 3-2. Kunimoto began his promotional run with three-straight victories in a nine-month span before losing to Neil Magny in early 2015. He then was not seen mid-2017, dropping a split decision to Zak Ottow before being released and debuting in RIZIN six months later.

Prior to his run in the UFC, he was a mainstay of Pancrase for many years and a HEAT champion.

Ryuichiro Sumimura (13-6) is currently on, by far, the best run of his career.

Since June of 2016, the Hyogo, Japan native has won six-straight. This includes winning a DEEP welterweight tournament to be crowned champion, and making defenses of said championship.

Along the way, Sumimura has been able to pick up stoppage victories over some incredibly solid competition in the form of Ken Hasegawa, Yuta Watanabe, and Rio Date.

The grappler, Kunimoto criticized Sumimura’s non-existent (his words) grappling. Even going as far as to tell Sumimura he doesn’t have to worry about being taken down, because he plans to knock out the striker.

Ryuchiro Sumimura didn’t even argue whether Kunimoto is wrong about his lack of ground game, but insists that it won’t matter once the veteran feels his power.

Despite recently contemplating retirement, Hatsu Hioki (29-11-2) has instead opted to sign with RIZIN Fighting Federation and debut in his hometown of Nagoya. He was admittedly intrigued by the idea of coming back to fight a hungry, young up-and-comer.

Prior to his recent 2-2 stint in Pancrase, Hioki competed in the UFC for nearly four years. He didn’t impress too much, however, only amassing a record of 3-5. This included three wins over some stellar names, though, as he defeated Ivan Menjivar, Bart Palaszewski, and George Roop.

His five losses in the promotion came to some of the best featherweights and lightweights the promotion has to offer. This includes Clay Guida, Darren Elkins, Dan Hooker, Charles Oliveira, and Ricardo Lamas. And, for what it’s worth, a lot of people thought he should have beaten Guida on the scorecards.

Before heading to the UFC, though, Hioki competed prominently in Sengoku and Shooto. Even traveling to Canada on multiple occasions to compete under the TKO banner before he became Sengoku Featherweight Champion ahead of his UFC signing.

Hioki is a grappler in every sense of the word, and opposite him at RIZIN 12 is a young striker.

The Outsider veteran Mikuru Asakura (6-1, 1NC) is a young man who thoroughly enjoys the stand-up aspect of fighting.

Recently competing (and winning) in both ROAD FC and DEEP, Mikura Asakura has a fighting style all too familiar thanks to his brother Kai. He is all action, all the time. Finishing five of his six career wins, four of those by devastating knockout.

In October of last year, Mikuru Asakura dropped a decision to Kil Woo Lee at ROAD FC 43, but he was able to rebound successfully against Kosuke Terashima at DEEP 83. This would end up becoming his first victory by way of decision.

This fight is such a clash of styles. A true striker vs. grappler match-up. Mikuru Asakura gets a chance to face a big-name veteran who has multiple stoppage losses due to strikes on his resume. And Hatsu Hioki gets to fight a young prospect who has never fought a fighter even close to the caliber of himself – especially when it comes to grappling.

I’m all about it.

In the sole kickboxing inclusion on this list, Kaito returns to the RIZIN ring after just competing on 24-hours notice last week and looking spectacular in the process.

At just 20-years-old, Kaito is a kickboxing ace fighting out of TEAM FOD. To many he is known as “The Prince of Shoot Boxing,” and seriously appears to be quite a prodigy when it comes to striking sports. He is a Shoot Boxing Super Lightweight Champion and recently made his RIZIN debut at last weekend’s RIZIN 11. Here he put on a wildly impressive performance and absolutely starched Yoshiya with brutal leg kicks in round one before knocking him out with a knee to the jaw in round two.

Opposite him, it’s quite a stiff test. He faces a representative of OISHI GYM in the form of Sho Ogawa, a WBC Japan Muay Thai Champion. As a child, he looked up to kickboxing legend Ernesto Hoost, and earlier this year he won the HOOST CUP Japan Super Lightweight Championship. Ogawa has been studying karate since kindergarten and a win vs. Kaito would do wonders for him – as he is also quite young in his kickboxing career.

Two high-level strikers, one of which has a ceiling just about as high as anyone. Can “The Prince of Shoot Boxing” get it done against the WBC Muay Thai Champion?

Despite this fight being booked on two weeks notice thanks to an injury suffered by Yachi’s original opponent, this is still an intriguing match-up.

Yusuke Yachi (20-6) has seriously began making a name for himself in the world of MMA.

After winning a championship in PXC, Yachi had a 2-1 run in Pancrase before joining RIZIN in 2016. Since then, he has fought exclusively for the Japanese juggernaut, going 5-0 in the process.

Despite no longer fighting Carvalho, the Japanese striker will still be facing a dangerous Brazilian on August 12.

He is a well-rounded and incredibly dangerous fighter, winning three fights by knockout and five by submission. After putting in some work at Evolução Thai, Luiz Gustavo will enter RIZIN 12 competing for the first time in 2018.

In terms of lightweights in RIZIN, they don’t get much better than Yusuke Yachi. So this will tell us alot about “Killer” Gustavo. Win, lose, or draw.

Gustavo is deservedly an underdog here – a massive one. But, he has the approval of “The Axe Murderer,” so he can have mine as well. Will the dangerous, young Brazilian pull the upset and get it done? Or will Yusuke Yachi keep his momentum rolling into something much bigger later this year?

Fittingly after making her debut in Nagoya two years ago, wrestling ace Kanako Murata (7-1) will return to Nagoya at RIZIN 12 against a UFC veteran.

She picked up four-straight wins to start her MMA run, this includes a win over top-ranked Combate Americas atomweight fighter Kyra Batara. It took Japanese pioneer and fellow wrestler Rin Nakai to snap her winning streak.

Since then, however, Murata has won three-straight. Returning to the RIZIN ring in May at RIZIN 10 and dominating Lanchana Green before a first-round anaconda choke finish.

Opposite her will be another debuting UFC veteran, this time in the form of 35-year-old American strawweight/flyweight standout Angela Magana (11-9).

Looking at her record, Magana looks not very impressive. After all, she has dropped five-straight.

When you look deeper at situation though, you see that Magana has actually managed to carve out a nice resume for herself in the MMA world. Prior to this terrible run she is currently on, Magana was able to defeat the likes of Jessica Aguilar and Barb Honchak. Two of the all-time greats of their respective divisions.

Could Murata absolutely wreck her? Of course. Will that most likely happen? Yes. But, hey, you never know. With six of her wins coming by way of submission, Magana is no slouch on the ground.

The American has taken an extended break that may help her. This time the break only spanned eight months as opposed to two and a half years. In my opinion, this is the wrestling an control of Kanako Murata against the submissions of Angela Magana. As much as I wanted to put Yuki Motoya vs. Kazuma Sone in this #5 spot, I have a morbid curiosity to see how this fight will play out and would be lying if I told you I was not excited for it.

At the very least, we get to see the grappling and wrestling of Kanako Murata again. That alone is worth the spot.

To give you an idea of how exciting the card is, we haven’t even talked about the flyweight fight between Yuki Motoya and Kazuma Sone. Or the heavyweight bout between Roque Martinez and Samurai Mark Hunt. Or the return of King REINA!

This card may not be stacked, but RIZIN 12 is absolutely going too be fun. Thanks to RIZIN FF CEO, Nobuyuki Sakakibara, we now officially know the bout order of the card as well. Thankfully only one intermission!

RIZIN.12 Fighter order is confirmed!
Come and enjoy the Summer Fight Festival vol.2 in Nagoya, Young and talented fighters who are hungry for the opportunity will show their best performance.RIZIN will get Nagoya fired up!
Please come experience the atmosphere of LIVE.#rizinff pic.twitter.com/VOELp3DyzX