Following the absolutely phenomenal RIZIN 11 show just two weeks ago, it didn’t seem likely that RIZIN 12 would be on-par.

Well, they somehow did it again. Another home run show from RIZIN fighting Federation, as they definitely brought the violence to Nagoya with RIZIN 12.

We saw some great back-and-forth action, wild knockouts, and hard-fought submission wins. The show featured a little bit of everything.

How do you pick five stars from this action-packed twelve-fight card? I really don’t know, but we’re going to try anyway. Before we go any further, check out the Five Stars of RIZIN 11.

When it comes to RIZIN lightweights, none are better than Yusuke Yachi. Seemingly an elite 155 lb’er, the KRAZY BEE hitter has been on a hot streak under the RIZIN banner. Since signing in 2016, Yachi has won five-straight, finishing the likes of Daron Cruickshank, Takanori Gomi, and Satoru Kitaoka.

Originally, Yachi was slated to face Bruno Carvalho at RIZIN 12, but this changed due to an injury.

In on two-weeks notice stepped 22-year-old Luiz “Killer” Gustavo out of Evolução Thai MMA, a protege of the great Wanderlei Silva.

Immediately, brought the fight to Yusuke Yachi. A plethora of winging hooks, flying knees, sharp knees from the clinch, big kicks. “Killer” Gustavo was truly going for it. Then, round two came.

In the second round, the onslaught from Gustavo continued. This eventually lead to him connecting on a right-hook, directly to the chin of Yachi for the knockout.

A seriously massive win for Luiz Gustavo, as he is now 9-0 with nine finishes. This includes a good mix of big knockouts and slick chokes. He hands Yusuke Yachi his first loss since early 2016, and his first knockout loss since 2013.

There is good debuts, and then there is great debuts. And making your promotional debut on two weeks’ notice to knockout the #1 ranked fighter in your division? That’s a pretty damn great debut.

In one of the most bittersweet moments of RIZIN 12, Mikuru Asakura showed the world what he can do.

A 25-year-old slugger, Mikuru Asakura entered his RIZIN debut fighting in front of his hometown Nagoya crowd. He is a ROAD FC alum and a former two-division The Outsider champion.

Asakura received a huge step up in competition when he faced 35-year-old veteran grappler Hatsu Hioki.

As a former Sengoku champion, and a veteran of countless promotions including the UFC and PRIDE, Hatsu Hioki was seemingly near retirement before being enticed to sign with RIZIN and fight a hot prospect in the form of Mikuru Asakura.

Mikuru Asakura gets a massive jump in competition against a big-name veteran, who just so happens to have multiple (T)KO losses on is resume. Hatsu Hioki gets an up-and-comer who has never faced anyone even close to his skill level. And both were fighting at home. Who would come out on top?

Mikuru Asakura got the brutal knockout in round one. Connecting on a vicious left high-kick before putting Hioki out with the follow-up shots.

The 25-year-old striker improves to 7-1 and picks up the fifth knockout win of his career. In the process, he gave Hatsu Hioki his third-straight first-round knockout loss.

Mikuru Asakura joins his brother, Kai Asakura, in RIZIN Fighting Federation. And both men are seemingly on a path of destruction. Kai’s began with kickboxing star Kizaemon Saiga, and Mikuru’s begins with a highly-respected mixed martial arts veteran in the form of Hatsu Hioki.

This was one of the most intriguing fights of the night.

Kiichi Kunimoto was out to show the difference between himself – an international competitor – and his opponent – a regional-level fighter with no ground game.

Ryuichiro Sumimura was out to not only prove that he was a world-class fighter, but also that he wouldn’t need his ground game to beat Kunimoto with a vicious knockout.

“Strasser” Kiichi promised he wouldn’t take Sumimura down, though. Spoiler alert; he lied. As he got the takedown immediately. After looking for the arm triangle choke for multiple minutes, Kunimoto was able to transtion from the back to lock in his much-desired arm triangle submission during the final ten seconds to choke the DEEP title-holder unconscious.

The easy win for Kunimoto improved the UFC veteran’s record to 20-7-2 with two-straight victories in a RIZIN ring as he snaps the huge six-fight win streak of Ryuichiro Sumimura without even breaking a sweat.

After four years away, “The Striking Viking” Kaitlin Young faced KING Reina in a pretty clear striker vs. grappler match-up.

Despite the large skid in MMA dating back many years, Young has been putting in a ton of focus towards kickboxing and muay thai during her absence. She entered RIZIN 12 looking to get her first win since 2012.

KING Reina is a 22-year-old judoka who has captured the attention of many thanks to her oddball antics and “KING” persona. At just 5’3, she has made a career so far out of fighting much larger opposition and dominating them.

Reina was able to defeat a veteran like Shayna Baeszler in just her second fight as a professional, and many thought she’d be able to ground and dominate Young.

“The Striking Viking” had other plans and showed up to Japan looking to put on a show for the Nagoya crowd and she did exactly that. She picked the favorite apart with sharp punches and big leg kicks and was able to avoid any and all submission attempts from KING Reina.

Kaitlin Young was on the receiving end of a few takedowns, throws, and choke attempts, but she clearly won the fight and all judges agreed as she netted a unanimous decision win. KING Reina picks up her second RIZIN loss, both of which come against veterans in the form of Kaitlin Young and Cindy Dandois.

The American, honestly, had no right to look as good as she did. And it was an impressive sight to see. Following this win, her record improves to 8-9-1 as she snaps four-fight losing skid. Not an impressive record on the surface, but something tells me that as long as she stays in RIZIN and keeps putting on performances like she did here, that record will be positive in no time.

Miura falls to 9-2 after two-straight wins in DEEP JEWELS.

In terms of Japanese MMA, Kanako Murata is one of the best amateur wrestling to mixed martial arts crossovers the sport has ever seen.

She is an absolutely stellar talent who entered the fight with three-straight wins and her only loss coming against female pioneer Rin Nakai in what wound up being her fifth pro fight.

The MMA community seemingly loves to hate Angela Magana, and that didn’t change much heading into her RIZIN debut.

We saw improved boxing from Murata, but we also saw her do what she does best; dominate with wrestling. Eventually she was able to mount and Von Flue choke Magana for the tap in round two.

Kanako Murata improves to 8-1 and puts on another fantastic performance. Angela Magana loses her seventh-straight, and now has her eyes set on representing Puerto Rico in wrestling for the 2020 Olympics. This will 100%, totally, for sure happen. 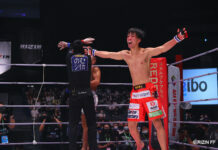