The main event is a middleweight match-up between former champion Eun Soo Lee and Tatsuya Mizuno. With six fights total, all twelve fighters have made weight and are a go.

“I am finally back after two years, and I am very honored to be able to fight a DEEP Champion. Tomorrow, I will work hard.”

“I am the DEEP Middleweight Champion, and I prepared a lot for this fight. Tomorrow I will show the world a good fight, I will show them pride, and I will represent as DEEP Champion.”

“It has been fifteen years since I first started fighting, and MMA has since improved a lot with so many changes. I’ve been working hard for the past year to show you guys a new look this time. I hope that the results will show well in this match. I am older, but I am going to continue. This is not the end.”

“I am honored to fight for ROAD FC. I’ll show the promotion and fans what I can do in the cage tomorrow.”

The Japanese legend, Kazuyuki Fujita returns to the ROAD FC cage to face America’s Justin Morton in another openweight bout. This will be a hardened veteran vs. a surging local champion.

“I will just keep challenging myself and utilizing my past fighting experience. I will do what I always do and show a good game tomorrow.”

“I am young, but I have good technique. I will show this tomorrow, just stay tuned.

“My opponent is like a little sister who is six years younger than me. I received help from many people and I did my best to prepare for this.”

“I feel really good now, and I prepared a lot for this because this is my second chance in ROAD FC. I will showcase a good fight and a winning performance.”

“I have never had a submission win in my career, but this might be that time. I will finish my opponent and change his nickname from ‘Bad Boy’ to ‘Bed Boy.'”

“I am so honored to participate in ROAD FC. Tomorrow I will show my opponent what Chinese Kung Fu is like, with a KO.”

“Well, I will have fun tomorrow.” 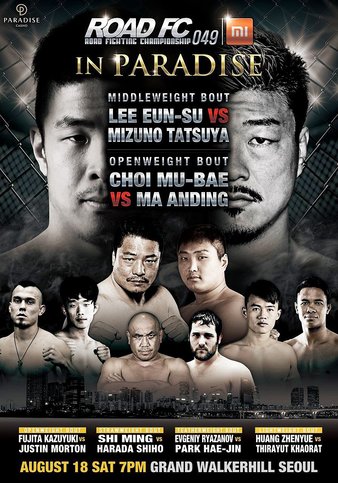