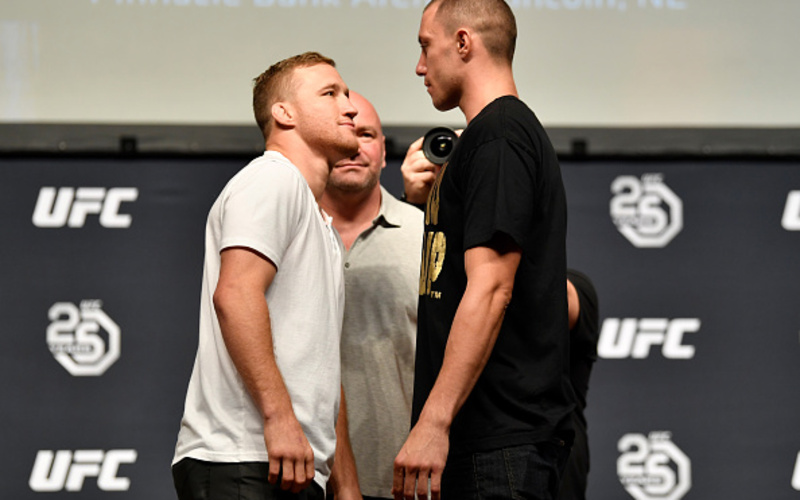 UFC Fight Night 135: Gaethje vs. Vick is a much-needed card. That three-week break from UFC was too long. For cash games, you are looking for 4 wins out of your 6 fighters. This is a stackable 5-round main event in cash. In GPPs, you are looking for 6 wins to have a chance to take home the big prize with an optimal lineup.  Good luck making lineups this week. This analysis should help you put those 6 fighter lineups together.

I’m a math guy so let’s talk numbers real quick.  James Vick is a -150 favorite and the ITD prop is -425.  With this fight expected to be played out on the feet, why is Justin Gaethje +174 to win by KO/TKO when James Vick is +178?  Gaethje is actually more likely to win by KO/TKO. It seems very clear how this fight will play out based on their previous fights.

James Vick likes to play on the outside ring of the octagon.  He uses his long frame to keep distance and win rounds. Vick will have a 6-inch reach advantage and a 4-inch height advantage.  He uses his left kicks almost as a probing jab but can also throw heavy kicks that do real damage.

He is also an opportunistic striker with his hands. Vick is 13-1 and in MMA, “styles make fights”, so I went back to Beneil Dariush vs. James Vick to see how Vick handled pressure in his face and the result was James Vick’s only loss via KO/TKO.  Dariush did not let Vick use his distance advantage and made him fight in close range. To that end, Vick did use an uppercut to drop Joe Duffy at close range so adjustments are being made.

Justin Gaethje has lost two straight fights to Eddie Alvarez and Dustin Poirier.  Both fights went into the 3rd round so Gaethje is a great cash game value if you want to play him alone but I do like the stack in cash.  Gaethje will pressure and will use his leg kicks to chop Vick down to size. All of Gaethje’s opponents make note of his power on those leg kicks.

In the 3rd round vs. Poirier, it was surprising to see Poirier have any success in round 4 with the way he hobbled over to his stool. Gaethje lands 8.6 significant strikes per minute so if this gets into the 3rd round he will hit a very nice floor win or lose.  Gaethje also absorbs over 10 significant strikes per minute so Vick can score really well as long as he matches Gaethje’s pace.

The elephant in the room here is, will Justin Gaethje use his high-level wrestling?  He hasn’t used it in previous fights but my gut instinct tells me he will push Vick up against the cage at times and drag him down, wear on him, and try to incorporate that into his attack.

Alvarez is a high-level wrestler so I didn’t expect to see Gaethje use wrestling there and Gaethje was killing Poirier with the leg kicks so if that was in the game plan he may have gotten away from that. With Vick playing on the outside of the octagon I think Gaethje can crowd him, get inside and work his wrestling a bit. I like Gaethje to win this fight but both guys are moderate GPP plays and a stack in cash seems obvious.  The winner of this fight should hit the optimal lineup

Barberena is a huge -490 favorite in this fight and it’s a pick em to finish within 1.5 rounds. Ellenberger has a lot of fights under his belt and they have caught up with him. He is 2-8 in his last 10 fights and 8 of his last 9 fights have finished.  He doesn’t use many kicks but will fire that heavy right hand at Barberena until he gets dropped or Barberena drops him. Ellenberger has a legit puncher’s chance because of that right hand.

This is a weird price for this fight if you watch MMA regularly.  Mickey Gall has fought two cans, submitted Sage Northcutt before he was ready to fight at 170 pounds and lost to Randy Brown in which his striking looked terrible. Mickey Gall has a path to victory once this fight goes to the ground as he should submit Sullivan if it gets there. Sullivan is the better striker unless Mickey has made big improvements since that Randy Brown fight.

Sullivan is a low volume GPP play being he should have the advantage on the feet and 7 or 8 minutes in the gas tank. Gall can win via submission at any time but that price tag is going to be tough if he can’t land many significant strikes.

This fight is favored to finish and is essentially a pick em.  Luke Sanders is the better striker and has KO/TKO power. Yahya is a BJJ specialist and effortlessly moves from one sub attempt to the next once it hits the ground.  Yahya will drive in early for that lead leg and try for that single leg takedown. Sanders is athletic and quick so he can stay away from those takedowns early and make Yahya strike with him.

Both guys are moderate GPP plays for me and I can see this hitting the optimal lineup. Great midrange fight and that grappler/striker stylistic matchup everyone likes to talk about. Sanders is prone to mistakes that cost him fights and Yahya is just the guy to capitalize on those mistakes.

This is a fight originally scheduled for the undercard that got moved up to the main card and rightly so.  I really like this fight. John Moraga has been able to reinvent himself and rededicate himself to MMA and is working on a 3 fight winning streak.  He has fought all the good guys in his career and at 34 years old is making a run in the division. He has a technical advantage on the feet in this fight.

Figueiredo is a wild man in the octagon. He is 14-0, only 2 of those 14 fights went to decision; he pushes a very high pace, putting lots of pressure on his opponent.  He is not a technical striker but he wings big, wide punches which close distance and he is very strong in the clinch. He’ll look for the takedown in the clinch and work his submission game on the ground.  My preferred play here is John Moraga but both guys are low volume GPP plays here when you build your mid-range lineups.