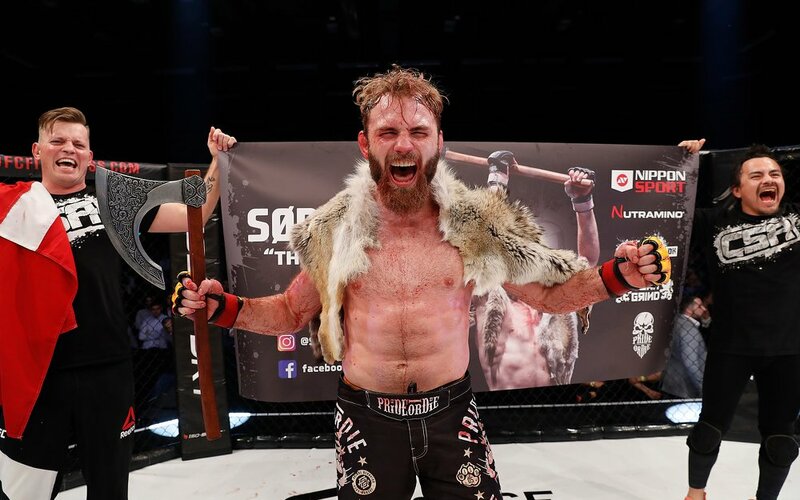 This weekend in the mixed martial arts world, many top organizations are absent from hosting an event. This includes Bellator, KSW, ONE, RIZIN, Pancrase, Titan FC, the UFC, and more. PFL 7 goes down tomorrow, August 30th, from the Ocean Resort Casino in Atlantic City, New Jersey. But we must ask: what does our Friday, Saturday, and Sunday look like in terms of fights and fighters that will put on a show for us viewers? Cage Warriors 96 and Invicta FC 31 both have solid lineups, along with a lengthy card in Fight Nights Global 88.

Let’s take a look at the top five MMA fights to watch this weekend. This includes matchups between the dates of Friday, August 31st to Sunday, September 2nd.

Coming in at number five is a welterweight fight between Denmark’s Nicolas Dalby and Italy’s Roberto Allegretti taking place at Cage Warriors 96. Both men have finishing abilities that could make for a great fight between two in need of a big victory.

Dalby made his Cage Warriors debut back in March of 2014, capturing the vacant welterweight title over Sergei Churilov and later defending the belt once against Mohsen Bahari. He would leave the promotion and sign with the UFC, eventually being released from with a 1-2-1 record. Dalby resigned with Cage Warriors, but dropped a split decision to Carlo Pedersoli in April. He is hoping to get back in the win column this weekend.

Not a lot is known yet about Allegretti, but his finishing skills have been nonetheless impressive. He remains undefeated with three submissions and two knockouts in six fights; three of those finishes coming inside the first round. Allegretti has not fought since April of 2017, where he last defeated Alessandro Giovanelli at Venator FC by split decision.

Fight Nights Global does not look the greatest on paper this weekend in comparison to past events, but the main event should not go without being mentioned. Tagir Ulanbekov will look to defend his flyweight title against challenger Zhalgas Zhumagulov.

Ulanbekov captured the FNG flyweight championship last October, defeating Vartan Asatryan with a guillotine choke in the fourth round. The win kept him undefeated with seven straight victories, in the meanwhile snapping Asatryan’s six-fight win streak. This will be Ulanbekov’s first attempt at defending the title.

In May of 2017, Zhumagulov has his shot to win the inaugural FNG flyweight belt battling Vartan Asatryan himself. However, he would fall just short, dropping a unanimous decision to Astrayan. Since then, Zhumagulov has earned back-to-back decision victories over Shajidul Haque and Tyson Nam.

A longtime veteran of the sport, Chadwick is in search of his first title defense since capturing the belt where he defeated Victor Cheng by decision last October. Despite having a fair amount of losses to his record, “The Butcher” is one of England’s most exciting fighters having finished 19 of his 24 opponents. His experience extends to many other organizations including BAMMA, ACB, OMMAC, and Cage Gladiators.

Billstein comes in as the challenger with former experience competing in both ACB and Bellator. He has put together a good run, putting together a 4-0-1 record in his last five appearances dating back to August of 2016. His last fight saw him battle to a majority draw with Mattia Schiavolin at Venator FC 4 in May.

A fight really under the radar this weekend is champion Virna Jandiroba going against challenger Janiaisa Moradin for the Invicta FC strawweight championship. This one deserves to be filled here for the second spot, as the two combined have 23 victories with a 70% average finishing rate.

Capturing the vacant strawweight title in her last fight, Jandiroba defeated one of Japan’s greatest scrappers in Mizuki Inoue by split decision. The win was her second under the Invicta banner, her first being a fast submission win over Amy Montenegro last December. Jandiroba is still in search of her first knockout victory, as 10 of her 13 fights have come only by way of submission.

23-year-old Morandin has compiled an impressive resume already for her age, her first professional fight back in June of 2013. She would go on to capture the Aspera Fighting Championship atomweight title before signing with Invicta. Despite a decision loss to Livia Souza in her promotional debut, she rebounded with a decision win in December over Kinberly Novaes.

One of the most anticipated fights of the year is just a couple days away. Paddy Pimblett, the former Cage Warriors featherweight champion, will battle Denmark’s Soren Bak for the vacant lightweight title. Both men have mutual respect for each other, but when the doors close, all will be set aside as they square off for a potential 25-minute war.

Pimblett is highly considered one of the greatest faces in European mixed martial arts at only 23 years old. His unpredictability is something one-of-a-kind, mixing it up well with his unorthodox striking and crafty submissions. He lost the featherweight title back in April of 2017 to now UFC fighter Nad Narimani, snapping the nine-fight win streak he rode dating back to early 2014. However, Pimblett got back in the win column earlier this year submitting Alexis Savvidis in the second round.

Bak, slightly older at 25 years old, is another one of Europe’s up-and-comers making a big name for himself. After suffering his only defeat in competition to Aleksi Mantykivi (also competing on this card), he made the move to Cage Warriors in May of 2017 earning three straight victories. In his last appearance, Bak finished Alexander Jacobsen with an arm-triangle in the second round. “The True Viking” is hungry to claim victory over the young English sensation.