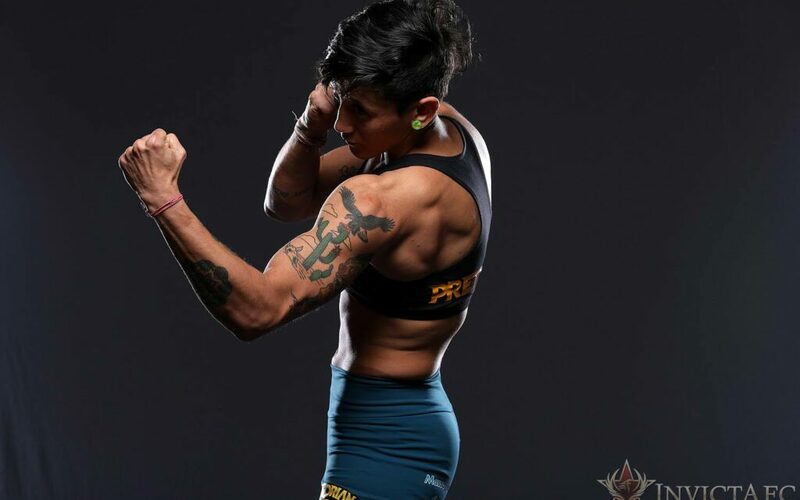 The main event featured the first title defense for strawweight queen, Virna Jandiroba, as she took on fellow Brazilian Janaisa Morandin. Jandiroba won the title against Mizuki Inoue by split decision in March 2018 at Invicta FC 28: Mizuki vs. Jandiroba. Janidroba took the fight to the ground near the end of the first round where she maintained her dominance until the bell rang to end the round.

The second round picked up where the first left off with Jandiroba scoring a trip takedown on Morandin. In short work, Jandiroba locked in the arm triangle for her first successful title defense. Jandiroba earned a Performance of the Night award for her second round finish.

Flyweight fan favorite Pearl Gonzalez took to the cage for her first bout after the passing of her father and her third contest in a six-month span. The Invicta newcomer, Daiane Firmino, came for a fight and brought it Gonzalez in the first round where the two exchanged strikes for takedowns. In the second round though, Gonzalez controlled the clinch game landing some devastating knees to the body.

After a huge takedown, Gonzalez looked very close several times to ending the contest in the second frame with one of many submissions. Firmino kept bringing the fight, even earning a takedown but unable to do to anything with the advantage. Gonzalez stayed composed and controlled the ground game again, leading to her unanimous decision win over Firmino.

Other Highlights of the Night

An Odd Way to Start the Night

The night started off to an odd kickoff with Holli Salazar and Audrey Drew kicking off the card. The fight was back and forth but during the fight while in the top guard position, Drew landed an obvious headbutt. The referee immediately called a stop to action and deducted a point. Due to the point deduction, the bout ended up as a 28-28 draw.

19-year-old Kay Hansen took on her toughest date to challenge taking on the dangerous striker, Helen Peralta. The young star earned her third professional career victory with her dangerous ground game and ever improving stand-up striking. Between MMA bouts, Hansen has been competing in boxing bouts to better improve her MMA stand-up game. The improves are becoming visible as Hansen looks more comfortable on her feet. Hansen used her superior ground game in the third round to win by vicious ground and pound with a referee stoppage. The strawweight prospect called out another 19-year-old prospect, undefeated flyweight Erin Blanchfield.

“I want to stay as active as possible,” Hansen told MMASucka. “Whether it’s MMA, boxing, or grappling I’m going to stay busy.” Stepping into the world of boxing as greatly helped improve the striking of Hansen. “I’ve always had confidence in my boxing. I just needed to improve some things. Boxing has really helped me with my MMA. Definitely a good choice.”

Rebounding from Loss to Performance of the Night Winner

After suffering her first professional loss about six weeks ago (split decision at Invicta FC 30) Miranda Maverick wanted a quick turnaround to get back in the win column. The performance put on by Maverick was nothing short of stellar. Maverick dominated the first round and ended the night of Invicta newcomer, Victoria Leonardo, by first-round submission, earning her Performance of the Night. In Maverick’s rebound after her first loss, she put the first mark in Leonardo’s professional “L” column. Maverick gave a passionate speech after the fight and looks to continue her ascent to the flyweight title and beyond. The 21-year-old has the skills and talent to continue evolving her game and reaching her goals sooner rather than later. Maverick told MMASucka back in July 2018 that her goal was to win the title and she repeated that statement in her post-fight interview.

“The loss I suffered against Brogan Sanchez was painful for me knowing how much work I had put into that 15 minutes of failure. It was hard to take,” Maverick told MMASucka. “I had been recovering from an injury, had gotten my nutrition under control and worked my butt off for at least 5 hours a day for almost a year since my previous fight and came in there to suffer a devastating blow. To come back and basically regain my confidence, mark out that loss and prove who I am capable of being to the world with that win was one of the best feelings ever.”

“And to make such a quick turnaround with all the stressful things I am in the midst of was hard to begin with. Most people told me it was not a smart decision to take that fight. But I did. I felt that it was right and with my faith, my family, and 2 gyms to back me. I went into that cage with more determination and motivation than ever before. I’m proud it was so dominate and absolutely elated that it was performance of the night! No rest for me. I’m right back to practice on Labor Day, awaiting my next bout. There is always improvement to be made and nutrition to maintain!”

Impressive Showing from one of Colorado’s Finest

Mallory Martin showed a keen in-cage I.Q improving in each of the three rounds against Ashley Nichols. Nichols dropped Martin with a very heavy strike, but Martin showed amazing heart and rebounded well to get out of the round. In the second round, Martin took the fight to the ground. She maintained control of the round but could not find an open to ever put the fight away. In the third round though, Martin put it all together delivered devastating, thundering ground and pound to earn a third round TKO stoppage.

“The game plan was to get her against the cage and take her down, pin her up against the cage, and ground and pound,” Martin told MMASucka. “I knew I was way more superior on the ground than her.” When asked if she would like to take a break from action or get back in the cage as soon as possible, Martin responded, “What’s next is just keep growing and getting better live in the moment and let whatever is supposed to come next come! Everything’s lining up for the taking!” It is absolutely foreseeable that Martin will be in the flyweight title picture if she can continue to build off of this momentum.

The Fight of the Night

The Fight of the Night award was given to Lisa Spangler and Shanna Young. Both fighters competed in a back and forth contest which could have easily ended up with either fighter claiming the victory. Spangler was given the split decision victory by the judges on this night. The two undefeated bantamweights squared off in a standup showdown with only one takedown. Young came out the gates with her kicks. Young gave out lots of punishment in the first leading to a bloody nose for Spangler to end the round. Later in the contest, Spangler adapted and was able to land strikes of her own. The two were exchange strikes until the very last bell. The judges were split, but Spangler kept her undefeated record intact picking up the win. She ended up sharing Fight of the Night honors along with Young.

Invicta FC 32 card was announced for November 16, 2018, which will take place at the Firelake Arena in Shawnee, Oklahoma. The main event is scheduled to be undefeated featherweight Felicia Spencer taking on Pam “Bam” Sorenson who has won five of her last six bouts. The co-main event features a very interesting strawweight bout between former champion Mizuki Inoue and former UFC veteran Heather Jo Clark. This fight very well could determine who gets the next shot at Jandiroba for the strawweight title. The card is also set to feature Ashley Cummins and Erin Blanchfield. The card will also feature the debut of Glory kickboxer Isis Verbeek. Former matchmaker Kaitlin Young will hang up her matchmaking duties to return to the Invicta cage. She is set to take on fellow featherweight Zarah Fairn Dos Santos.