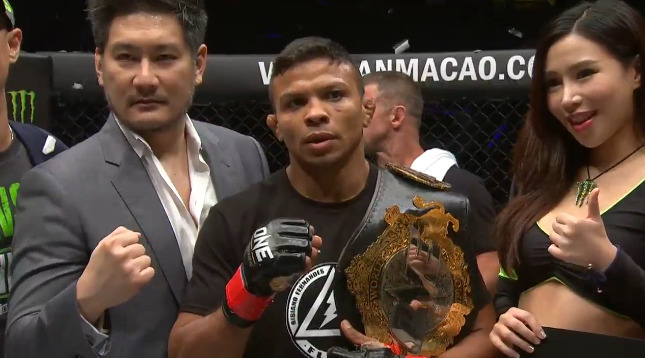 ONE Championship has announced the main event of ONE: HEART OF A LION, which is set for November 9 live from the Singapore Indoor Stadium.

ONE Women’s Strawweight Champion, “The Panda” Xiong Jing Nan will defend her title against ONE Women’s Aromweight Champion, “Unstoppable” Angela Lee. Also on the card, statistically the greatest fighter in promotional history, and current bantamweight king, Bibiano “The Flash” Fernandes defends his strap in a rematch against interim champion Kevin “The Silencer” Belingon.

“ONE Championship is coming home to Singapore this November, and we have an amazing evening planned for the fans in the Lion City. Two incredible world champions, the best of the best in their division, are set to go head-to-head in a highly-anticipated super-bout. ONE Strawweight Champion Xiong Jing Nan will step up to the plate and accept the challenge from ONE’s Atomweight Champion Angela Lee in what will be the biggest spectacle in Asia this year. It’s a thrilling match-up that should have fans on the edge of their seats in excitement. In addition, the highly-anticipated rematch between reigning ONE Bantamweight Champion Bibiano Fernandes and Filipino superstar Kevin Belingon is going down. It is going to be an awesome contest that fans will not want to miss!”

TWO TITLE VS. TITLE FIGHTS ANNOUNCED FOR ONE: HEART OF A LION

“The Panda,” Xiong Jing Nan, began her career competing in professional boxing and was inspired to pick up the sport by her father. Featuring a wide array of skills, she bagged a gold medal at the prestigious China Open BJJ Tournament in 2017, as well. Since winning the strawweight title in January, the Beijing, China native has made two successful defenses. In her most recent outing, she defeated Samara Santos of Brazil to retain her title and push her record to a staggering 16-1. Up next, the 30-year-old travels to Singapore to defend against Angela Lee.

“Unstoppable” Angela Lee is considered one of ONE Championship’s most outstanding athletes, and for good reason. The Canadian-Singaporean captured the inaugural ONE Atomweight Championship with an awe-inspiring victory over Mei Yamaguchi in May 2016 in what was considered a contender for Fight of the Year. Since then she has made three title defenses, this includes another bout with Yamaguchi. Lee’s beautiful combination of great striking and elite grappling has proven to be a potent formula for success, as she holds a record of 9-0. She is now set to challenge for title number two when she takes on Xiong Jing Nan.

With a win, Lee joins Aung La Nsang and Martin Nguyen as a double champion within ONE Championship.

Despite being 38-years-old and competing for what feels like a lifetime, Bibiano “The Flash” Fernandes is the reigning ONE Bantamweight Champion, and somehow looks better now than he ever has. Currently considered one of the best fighters in the world, he made his ONE Championship debut back in 2012 and captured bantamweight gold in 2013. Since then, Fernandes has remained unbeaten inside the ONE cage. Showcasing tremendous striking, incredible grappling ability, and an unwavering will to win. In his most recent bout, Fernandes fended off two-division titleholder Martin Nguyen in a champion vs. champion superfight. Up next; a familiar foe.

30-year-old Filipino superstar Kevin “The Silencer” Belingon of Team Lakay hails from Kiangan, Fugao province. He made his pro debut in 2007 and won his first nine bouts while capturing a local flyweight title. After joining ONE Championship in 2012, Belingon put together a series of tremendous performances and highlight-reel finishes to earn a bantamweight title shot against Fernandes in 2016. Although Belingon did fail to capture the title, he has since been on a warpath back to the champion. Most recently, Belingon became the interim champion as Bibiano Fernandes was sidelined with injuries. To do so, he put on an absolutely tremendous striking display to defeat two-division title-holder Martin Nguyen.

ONE: HEART OF A LION goes down on November 9, live from Singapore. More bouts to-be-announced.