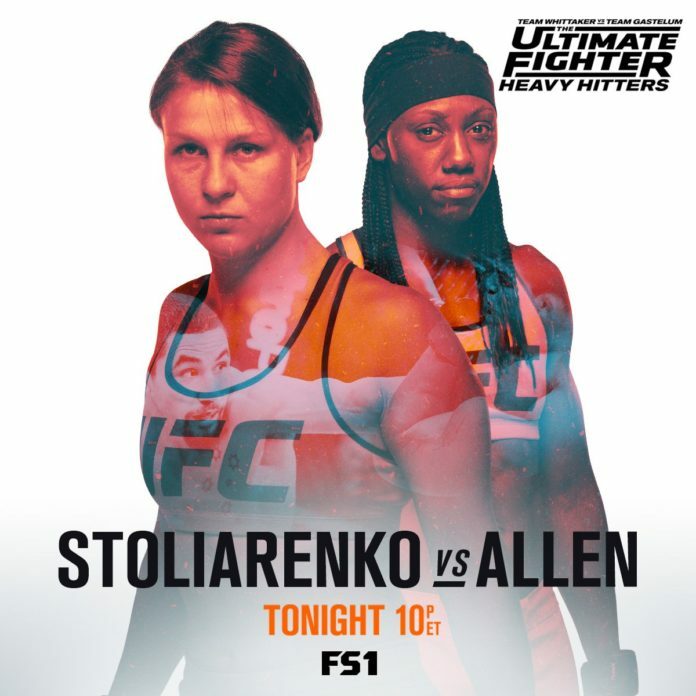 It’s week four of The Ultimate Fighter Season 28, and that means two more women will be throwing down! Team Gastelum rep Marciea Allen will do battle with Team Whittaker’s Juliya Stoliarenko. Just as a warning, this week’s TUFtermath may be a little light on details, as TSN, the sports channel that carries TUF here in Canada, pre-empted nearly half the show for a baseball game that ran long, while running the same junior hockey game on its other four channels.

#1) Marciea’s Coming Out Story – One thing I appreciate with the TUF seasons featuring women is how the producers are taking the time to let LGBT+ fighters tell their coming out stories. While it can be overlooked due to just how loud the closed-minded amongst us are fans are, there is still a significant LGBT+ segment within the MMA fan base. It is important for them, especially younger fans, to see that representation. Marciea Allen had an especially rough time when she came out while a student athlete in college. This included having male athletes from her school spitting on her. It’s pretty messed up, but at least her family was supportive.

#2) A Special Moment – Kelvin Gastelum brought in his first guest coaches, of the season, and he went back to his beginning. He brought one of his first coaches, BJJ black belt Brian Beaumont, to help with grappling instruction. However, as they were doing the demonstration, Beaumont surprised Coach Gastelum and awarded him his black belt.

#3) Life’s a Beach, Or is it? – Coach Rob Whittaker, in an effort to stave off cabin fever and be “The Fun Coach,”took his team to an artificial lake outside of Las Vegas. Everybody went out on paddleboards and had a good time, but it didn’t necessarily rub everybody the right way. Later in the episode, Leah Letson, would begin to voice her displeasure at the lack of seriousness and intensity in the training sessions. She was also having difficulties with the language barrier between herself and the coaches. This led her to consider switching sides to join the Team Gastelum training sessions.

Stock Up: Juliya Stoliarenko. Juliya Stoliarenko showed a lot of heart in her fight with Marciea Allen. After spending a good chunk of it underneath the pummeling fists of Allen, Juliya was able to gut through and turn the tides en route to her armbar victory

The first round saw Marciea Allen start strong, stuffing a takedown from Juliya Stoliarenko and ending up on top. Allen would drop some destructive ground and pound, bloodying Stoliarenko’s nose. However, the Lithuanian somehow was able to get back to her feet, secure a takedown, and eventually submit the Invicta FC veteran for Team Whittaker’s first win of the season. With her first round submission victory, Juliya Stoliarenko is moving on to the next round.

Next week, Team Whittaker looks to keep the momentum going as Michel Batista will go to war with Team Gastelum’s Josh Parisian in the second preliminary featherweight bout. Keep it locked to MMASucka.com for the next TUF 28 TUFtermath!