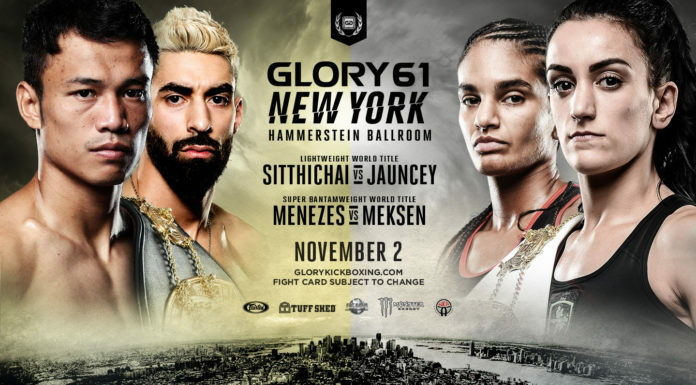 Glory returns to New York on November 2, as the historic Hammerstein Ballroom plays host to GLORY 61. The event marks the promotion’s sixth event in the Big Apple and second event at the venue which previously hosted GLORY 9 back in 2013.

GLORY Lightweight Champion, one of the world’s top strikers, Sitthichai Sitsongpeenong (120-30-5, 23KO) will look to represent Thailand as he showcases his skills in the main event of GLORY 61 against #3 ranked challenger Josh Jauncey (29-8, 15KO) out of Canada.

The main event match-up features two of the world’s most dynamic strikers in a rematch over three years in the making. The pair met back in 2015 during GLORY 22’s one-night lightweight contender tournament in Lille, France. Jauncey entered the bout on a four-fight win streak, while Sitthichai was making his highly-anticipated GLORY debut. On that night, the debutant halted the winning ways of the Canadian upstart by way of unanimous decision.

Since that first meeting, the 26-year-old Sitthichai has gone out on a consistent basis and carved one of the most dominant runs in promotional history. As part of his 10-1 record in the company, he has defended the lightweight title five times and defeated the likes of Robin van Roosmalen, Marat Grigorian, Davit Kiria, and Dylan Salvador. Some of them even two, three times.

26-year-old Josh Jauncey has been signed to the GLORY roster since 2014, facing a who’s who of legends, champions, and former title-challengers including Sitthichai, Giorgio Petrosyan, and Christian Baya. Following wins against top contenders Stoyan Koprivlenski and Baya, who were ranked #3 and #2 at the time respectively, this upcoming GLORY 61 main event will mark Jauncey’s first title shot.

Menezes beat the seemingly unbeatable Meksen at GLORY 56, handing the former champion her first loss in nearly four years. The win was surrounded in controversy, however, as Menezes was victorious by way of highly-controversial split decision.

The loaded line-up will also feature the return of former interim featherweight title-holder, Kevin Vannostrand (17-3, 12KO) as he takes on Massar Glunder (32-12-4, 20KO) in a pivotal featherweight bout.

#3 Vannostrand and #11 Glunder were slated to face off at GLORY 55 – also in New York – before Vannostrand received a short-notice title chance.

GLORY 61 is immediately preceded by the GLORY 61 SuperFight Series, headlined by a match-up featuring former middleweight champion Jason Wilnis (30-9-1, 8KO) as he faces a to-be-announced foe.

Justin Houghton (10-6) will face Vince McGuinness (1-1), who is coming off his first career loss. This will be contested at lightweight. And at featherweight, Asa Ten Pow (7-1, 5KO) will look to continue adding knockouts to his highlight-reel when he faces a to-be-announced opponent.

The current fight card for GLORY 61 SuperFight Series can be found below: