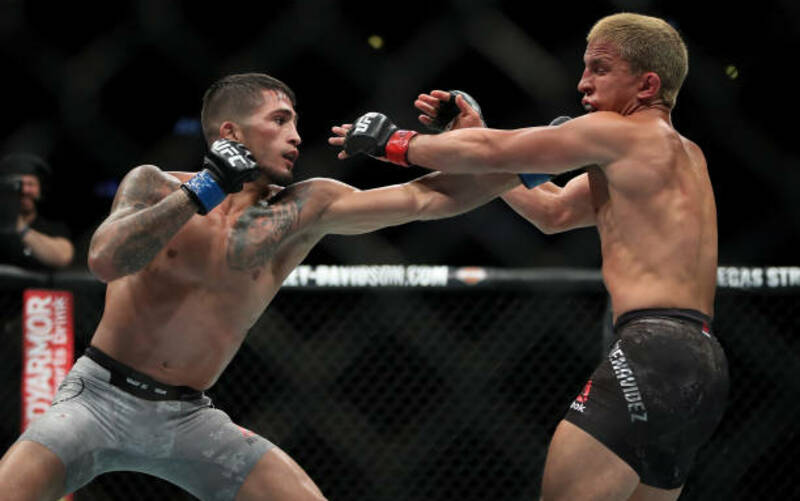 At UFC 229, Sergio Pettis will take on Jussier Formiga in a fight that will likely determine the next UFC flyweight title challenger. The 25-year old Pettis is coming off of a split decision victory over former title challenger Joseph Benavidez. According to MMASucka, “The Phenom” is the number four ranked flyweight in the world.

Sergio Pettis made his UFC debut at bantamweight at UFC 167 when he was just 20 years old. He defeated Will Campuzano by unanimous decision. In his next fight, Pettis would suffer the first loss of his young career. He was defeated by Alex Caceres via submission late in the third round at UFC on Fox 10. The fight was named Fight of the Night.

Pettis would bounce back well from his first career loss in his next two fights. He first defeated Yatozin Meza via unanimous decision. Then, he followed that performance up with another fight of the night, this time a unanimous decision victory over Matt Hobar. After the Hobar fight, Pettis made the decision to drop down to the 125-pound division.

At UFC 185, Pettis faced Ryan Benoit in the flyweight division. His first fight at flyweight in the UFC would end up being his second loss in the promotion. Benoit finished Pettis in the second round. It was not a good night for the Pettis family, as Sergio’s brother Anthony Pettis lost his lightweight title in the main event of the same card. Through five UFC fights, The Phenom was 3-2. For a young guy who didn’t know what it was like to lose, it was a tough start for Sergio Pettis.

Rise to the Top

Unfortunately for Pettis, all great things eventually come to an end. He took on now-champion Henry Cejudo at UFC 218 and was defeated via unanimous decision. Cejudo’s top-level wrestling was way too much for Pettis, who was held down to the mat for most of the fight. It was clear during the fight that Pettis just wasn’t quite there yet when it came to fighting the elite fighters in the flyweight division.

At UFC 225, Pettis successfully bounced back from his third loss against Benavidez, winning the fight via split decision. Benavidez was widely regarded as one of the best flyweights, and the guy who gave then champion Demetrious Johnson the toughest competition. Heading into the fight, Pettis was a significant betting underdog. But, he pulled it off. He showed, unlike in the Cejudo fight, that he was capable of beating the elite flyweights in the world.

In Pettis’s upcoming fight with Jussier Formiga, it seems that the winner will likely receive a title shot. Stylistically, the fight could pose some issues for Pettis. Formiga is a top-level grappler, specifically in Brazilian Jiu-Jitsu. He will be looking to take the fight to the ground as much as possible, something Pettis struggled with against Cejudo. But, Pettis undoubtedly has the striking advantage. As long as he can keep the fight on the feet, he should have no problem securing the victory. If he finds himself on the mat, though, Pettis could fall victim to a Formiga submission like so many other fighters have. Opposite styles usually result in an uncertainty of what will happen. Throw in a likely title shot, and this fight is full of intrigue and uncertainty.