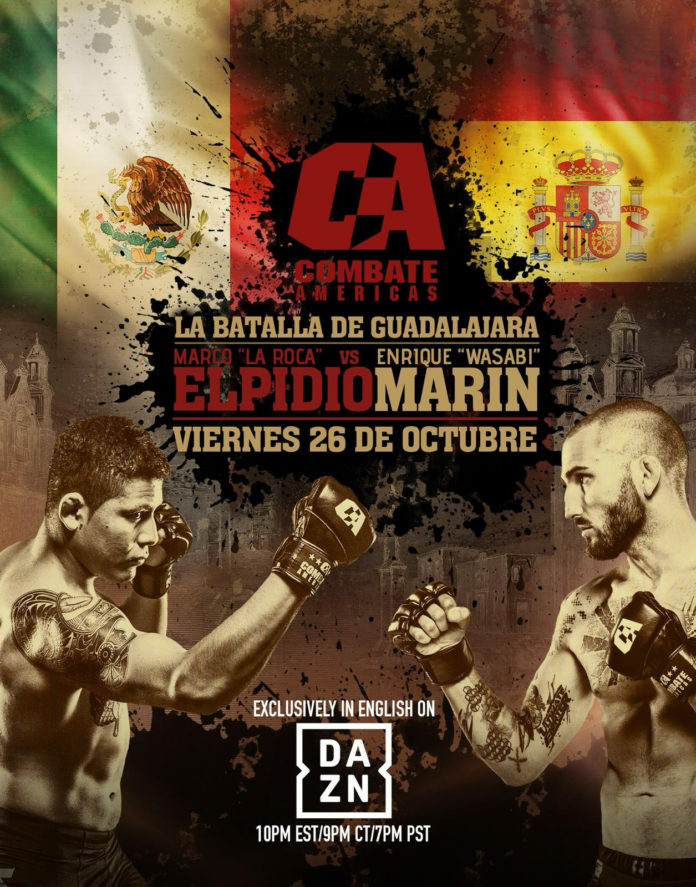 Also announced was a bantamweight feature fight between Victor Hugo “El Periquito” (6-2) of Guadalajara and Christian “El Taylon” Quinonez (12-2) of Zacatecas. And at flyweight, unbeaten stud Edgar Chairez (4-0) of Mexicali will fight a hometown boy in the form of Axel Osuna (3-1).

“This, it’s a war like no other in history. The lightweight fight between “La Roca” and “Wasabi” comes down to who will rule Guadalajara,” said Combate Americas CEO Campbell McLaren.

“La Roca,” Marco Elipido is a 5’8, 25-year-old powerhouse out of Mexico City. He enters the Combate Americas cage for the fifth time in his career and looks to return to the win column after suffering a unanimous decision defeat against Andres Quintana, that bout at featherweight.

The 32-year-old Marin of Seville, Andalusia, Spain was a runner-up on season two of TUF: Latin America. “Wasabi” has earned eight of his eleven pro wins by way of knockout or submission. He last fought back in March, taking out Yuki Yamasaki by way of doctor stoppage in Spain.

In other action at ‘Combate Americas: La Batalla de Guadalajara’, Alejandro Martinez (15-2) of Puerto Vallarta will take on Jordan Beltran (9-4) of Puebla in a 150-lb catchweight bout. In women’s atomweight action, gritty battler Brenda Enriquez (1-2) of Salt Lake City, Utah will duke it out with Alitzel Mariscal (0-0) of Guadalajara.