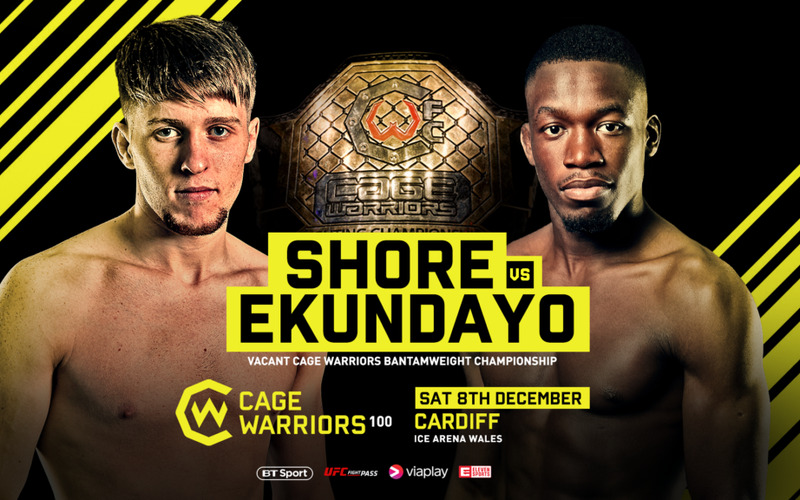 The Welsh product, Jack Shore has a second opportunity to challenge for the promotions bantamweight title. By no fault of his own, the young fighter lost an opportunity to fight for the vacant title at the recent Cage Warriors 97. The original contender opposite Shore, Jakub Wikłacz withdrew from the title contest due to injury nearly three weeks prior to the September 29th card. Unfortunately, the withdrawal trouble did not end with Wikłacz.

Germany’s Omer Cankardesler was the next fighter tasked with taking on Shore. As luck would have it, Cankardesler also withdrew from the bout. His withdrawal came at the last possible moment as the issues with the German’s medicals arose and was forcibly removed from the event. Weslley Maia stepped up on 24 hours notice to take on Shore, although the stakes were altered and the title was no longer on the line at CW 97.

At the event, Shore dominated the Brazilian earning a 1st round TKO victory. The victory extended his undefeated professional record to 9-0. He also added to the impressive amount of career stoppages, making his number 8 (5 by TKO/KO, 3 by Submission).

The Pilot of Ekundayo Airlines

His counterpart, Mike Ekundayo also holds an impressive record of 7-0 of his own. The Team Titan fighter comes into the matchup after a hectic first half of 2018. Ekundayo began the year by capturing the Rise of Champions bantamweight title when he defeated Jonas Magard by rear-naked choke in the second round of the fight.

From there, he replaced an injured teammate at Bellator 200. At the event, the undefeated Londoner destroyed the left arm of Tom Mearns mid-takedown. Mearns’ arm hung like a spider on a single strand of web and Ekundayo earned the TKO victory.

His most recent appearance saw Ekundayo debut for Cage Titans in dominant fashion. He took on the highly touted Ed Arthur at Cage Warriors 95. At the event, Ekundayo controlled nearly every second of their bout. Arthur struggled to get any offense going as he spent almost the entire fight off his back.

The matchup between the highly respected European fighters again highlights the vast depth of the bantamweight division worldwide. Both Ekundayo and Shore are the two next up and coming talents in the European circuit. This title fight determines who the best young bantamweight in Europe is.