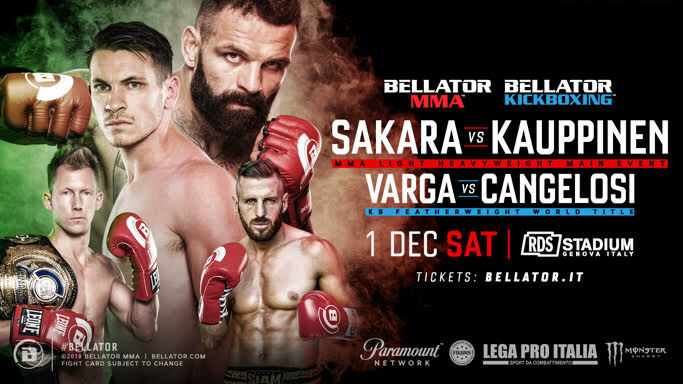 Bellator has announced that the organization will host their first event in Genoa, Italy on December 1 from the RDS Stadium. The show will be headlined by Italian legend Alessio Sakara (20-12, 2NC) as he takes on Kent Kauppinen (10-4) in a light heavyweight main event.

Having held previous events in Rome, Florence, and Turin, this will mark Bellator’s sixth overall trip to Italy.

The event will be overseen in Italy by the FIKBMS, also known as the Federazione Italiana Kickboxing, Muay Thai, Savate, Shoot Boxe e Sambo. The long-standing federation was founded in 1974 and is officially recognized by the Italian National Olympic Committee. The FIKBMS is also affiliated with WAKO, the World Association of Kickboxing Organizations.

“Working with a reputable federation or commission is and always has been a high priority for us wherever we hold events,” said Bellator President Scott Coker. “Having FIKBMS’ oversight in Italy ensures that we are continually being held in high standards in terms of fair competition, athlete safety, and other regulatory matters. They provide both legitimacy and transparency, which are paramount to success in our international shows and organization as a whole.”

Additionally, Alessio Sakara has become Bellator’s newest brand ambassador. He will now officially represent the organization outside of the cage – through various avenues.

Italian superstar Alessio Sakara returns to the Bellator cage for a fifth time, having already defeated the likes of Joey Beltran and Brian Rogers. Most recently, he took out Jamie Sloane. “Legionarius” has defeated the likes of Thales Leites and James Irvin in his long career as well, and has become iconic amongst Italian fans for always looking to put on a show.

He trains at the world-famous American Top Team gym in Florida. The former title-contender has built a reputation as a powerful and feared knockout-artist, collecting twenty career wins with eleven first-round knockouts.

Fighting out of Dragons Lair MMA in England, Kent Kauppinen may not be known to the vast majority of fight fans, but he can proudly boast about a 100% finish rate in all of his career victories.

Ever the crowd-pleaser with his fighting style, “The Hammerhorn” rarely lets his fights pass round one, as he has stopped eight foes in the opening five minutes.

Current Bellator Kickboxing Featherweight Champion, and representing Canada in enemy territory, Gabriel Varga signed with Bellator in March of 2017, quickly going on to defeat Kevin Ross for the title earlier this year.

Unbeaten under the Bellator KB brand while fighting on Italian soil, the 33-year-old Toronto-native is a two-time GLORY title-holder as well. He now meets Shan Cangelosi, who fights out of Sanpayak Gym in Genoa. The muay thai specialist welcomes Varga in front of what will surely be enemy territory for the Canadian against a homegrown talent.