Michael Chandler gets title rematch vs. Brent Primus at special ‘Salute the Troops’ show in Hawaii 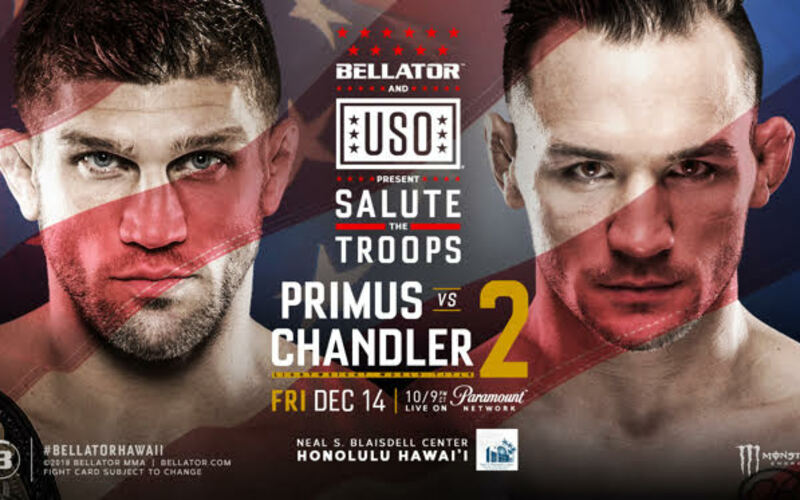 Bellator has added another show to their upcoming Hawaiian weekend, making it a Hawaii double-header. The organization has partnered with the USO for a special live event on December 14. This happening the night prior to Bellator 211 in the same venue, Brent Primus defends his lightweight title against Michael Chandler.

“Having worked with the Army Combatives Program to evaluate and update their combat readiness, I have long respected the military and their courage,” said Royce Gracie, MMA Legend and Bellator Ambassador. “When I found out we were doing an event in Hawaii, knowing the large military population there, I knew we had to show our support and appreciation through MMA.”

Bellator President Scott Coker is proud of this new relationship with USO and is eager to show his support to the brave service men and women.

“The USO is a historic military support organization – not just in entertainment but in connecting them back to the things they love and fight for,” said Coker. “It made perfect sense for Bellator to establish a relationship with the USO and provide a unique opportunity to Hawaii’s military population. We appreciate their service to the nation, and we hope this is just the first of many opportunities for us to work together.”

Emanating from the Neal S. Blaisdell Arena in Honolulu, this unique first-time-ever show from Bellator will be headlined by a highly-anticipated lightweight rematch. Current champion Brent Primus (8-0) defends the title against the man he defeated to become champion, two-time title-holder; Michael Chandler (18-4).

Also on the card, a heavyweight clash between the legendary Frank Mir (18-12) and Javy Ayala (10-7) takes over the co-main event slot.

The event, dubbed ‘Bellator and USO Present: Salute the Troops’, will air on Paramount Network on Friday, December 14 at 10pm ET. The event will be a simulcast on CMT and also stream live on DAZN. Prelims, per usual, go down on Bellator.com.

Michael Chandler gets title rematch vs. Brent Primus at special ‘Salute the Troops’ show in Hawaii

Lightweight champ Brent Primus puts both his title and his undefeated streak on the line in a highly-anticipated rematch for the Bellator Lightweight Championship. After upsetting Chandler last year, the Oregon-native has since battled injuries that have consistently delated his return to the cage. Now, he looks to silence his critics and prove that he is the rightful and deserving champion.

Opposite him, one of the most decorated fighters in Bellator MMA history; “Iron” Michael Chandler has plans to reclaim the lightweight title and become a three-time champion. The Missouri-native has defeated a who’s who of the division’s elite, this includes Benson Henderson, Patricky Pitbull twice, Goiti Yamauchi, and Eddie Alvarez. After absolutely smashing Brandon Girtz and Goiti Yamauchi, the elite lightweight has earned his way back to number one contender status and plans to leave Hawaii with the belt once again.

Former UFC Heavyweight Champion, Frank Mir returns to the Bellator cage following his first-round knockout loss to mixed martial arts royalty Fedor Emelianenko. Over the course of his highly-accomplished career, Mir has defeated the likes of Roy Nelson, Antonio Rodrigo Nogueira twice, Brock Lesnar, and Mirko Cro Cop, just to name a few. The BJJ black belt looks to add another impressive finish to his resume when he takes on the man that scored a shocking upset knockout over Sergei Kharitonov two years ago.

Going by the nickname “Eye Candy,” heavyweight Javy Ayala impressively defeated the likes of Eric Prindle and Raphael Butler. But, the California native’s biggest win by a mile thus far is the aforementioned KO over Sergei Kharitonov. Can he add another MMA legend to his resume in the form of Frank Mir?

This unforgettable night will be part of a historic weekend that culminates with the previously mentioned Bellator 211 (Bellator Hawaii) on Saturday, December 15. The DAZN exclusive will be headlined by Hawaii’s own Ilima-Lei MacFarlane who defends her flyweight title against Valerie Letourneau. Former UFC Light Heavyweight Champion, Lyoto Machida, makes his Bellator debut this night as well. He takes on former champion Rafael Carvalho. And Neiman Gracie faces Ed Ruth in a Bellator Welterweight Grand-Prix Quarter-Final match-up.

Bellator and the USO will also partner for a week of special events in Hawaii leading up to the big weekend of exciting fights on December 14 and 15. More details to come soon.