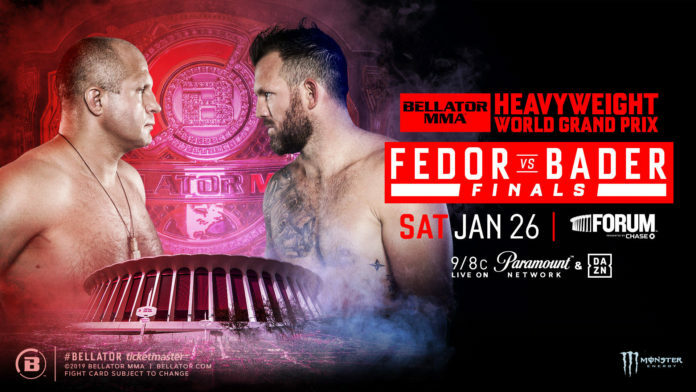 The conclusion to the year-long Bellator Heavyweight Grand-Prix is finally upon us. As the greatest fighter in the division’s storied history, Fedor Emelianenko faces current Bellator Light Heavyweight Champion; Ryan Bader. The dream matchup takes place on Saturday, January 26 at The Forum in Inglewood, California.

Fighting out of Stary Oskol, Russia, Fedor Emelianenko (38-5, 1NC) is bonafide mixed martial arts royalty. He enters the Heavyweight Grand-Prix Finals on the heels of back-to-back first-round knockout wins over Chael Sonnen and Frank Mir in the semi-finals and opening round.

A former PRIDE FC Champion and PRIDE Heavyweight World Grand-Prix Champion, “The Last Emperor” is now one win away from adding Bellator gold to his storied resume. Often referred to as the greatest of all time by fans worldwide, his career resume is one of the most impressive in the sport’s history. He holds wins over the likes of Antonio Rodrigo Nogueira, Mirko Cro Cop, Mark Hunt, Andrei Arlovski, Mark Coleman, and so many more. He hopes his signature punching power and world-class sambo will earn him the 30th finish of his career — and Bellator gold.

Attempting to become a simultaneous two-division titleholder, Ryan Bader (26-5) has nearly completed his quest for the rare achievement. So far throughout the tournament, Bader managed to pick up a fifteen-second knockout win vs. “King Mo” and an utterly dominant unanimous decision victory over Matt Mitrione in the opening round and semi-finals.

Fighting out of Gilbert, Arizona, the former two-time NCAA Division I All-American wrestler out of Arizona State University began his pro career with a twelve-fight unbeaten streak by winning the eighth season of The Ultimate Fighter. As his career progressed, “Darth” has continued his path of dominance in the 205-pound division by defeating some of the best fighters the weight class has to offer. This includes “Rampage” Jackson, Rashad Evans, Phil Davis, Rafael “Feijao,” and Antonio Rogerio Nogueira.

No other bouts for the card have been announced.