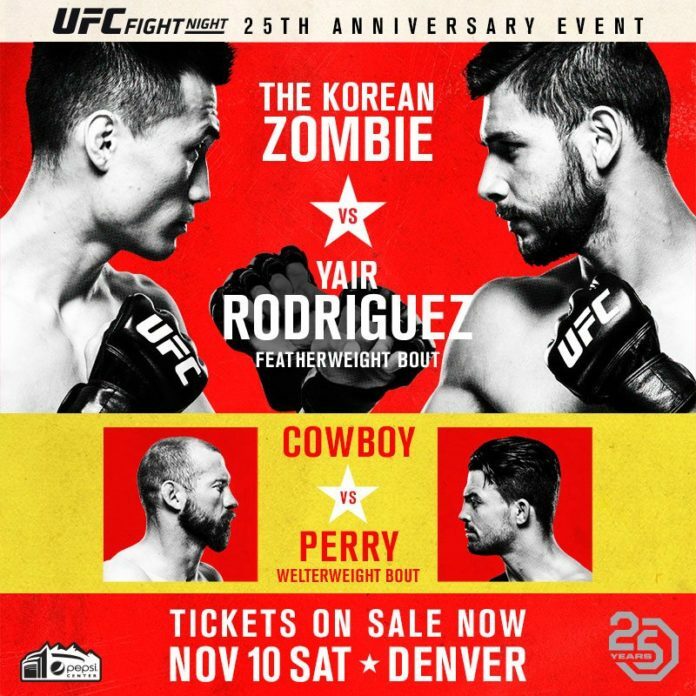 This week’s edition of the Walkout Consultant, dealing with fighters’ UFC 229 walkout songs is brought to you by Dewar PR! Dewar PR is one of Canada’s top rock and metal public relations firms, representing an international roster of clients. If you’re a fighter looking for a unique walkout song, owner Curtis Dewar‘s client list is a great place to start your search.

UFC Fight Night 139 is set to go down this Saturday night! “The Korean Zombie” Chan Sung Jung will return to the Octagon to face a rebounding Yair Rodriguez. And the hostilities will go down live at the Pepsi Center in Denver,CO . As with many UFC events though, there are a lot of fighters who will need help selecting more memorable, on-brand entrances. As MMASucka.com’s resident musicologist, I can offer suggestions that will help fighters further stand out from the pack with their UFC Fight Night 139 walkout songs. I’m even posting them here for you, the discerning fans’, consideration. So, without further ado, here… We… Go!

What he last walked out to: “Born Free” – Kid Rock

What he should walk out to next: “Sky Road” – Owl Maker

It’s pretty simple for poor Ashley Yoder. Things need to change if she’s going to snap the three fight losing skid she’s on. A good start would be dropping the weightless Kid Rock entrance song for something more rocking and powerful. Something fantastical but free-spirited. Something like Owl Maker’s “Sky Road.” You can hear it below.

What he last walked out to: “God’s Plan” – Drake

What he should walk out to next: “The Revolution Will Not Be Televised” – Gil Scott-Heron

The Drake Curse struck again when Eric “Showtime” Shelton lost to Alex Perez at UFC on FOX 28. That means he’s back down on the Fight Pass prelims, looking to bounce back. Now, I get that maybe Eric needs to walk out to something a little more laid back, but he could also stand to enter to a song that has both a chill, funky vibe with fiery vocals. A perfect song for a young man in Shelton’s position is “The Revolution Will Not Be Televised” by Gil Scott-Heron. You can hear it below.

Keep it locked to MMASucka.com for more of the best in MMA news and opinion