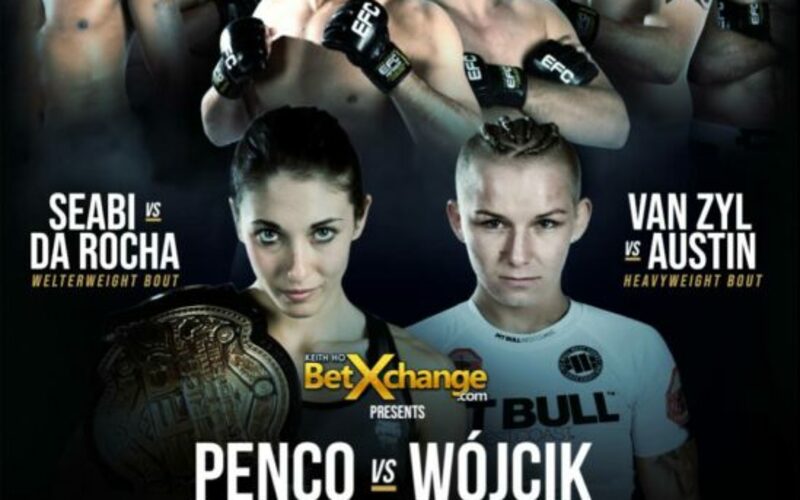 Saturday, Africa’s premier mixed martial arts promotion returns as EFC 76 airs Live from Pretoria, South Africa. At the top of the bill are two title fights. In the main event, current women’s strawweight champion Chiara Penco looks to keep her unbeaten record intact, as she attempts to turn away Karolina Wojcik to notch her first successful title defense. In the co-feature, former EFC heavyweight champion Ruan Potts looks to reclaim some of his promotional glory. He faces onetime LFA and EFC title challenger, Jared Vanderaa in an interim title affair.

Further down the card, another former heavyweight king tries to climb back to the top of the division when Andrew Van Zyl tries to bounce back after dropping his title to light heavyweight champion Dalcha Lungiambula earlier this year. If Zyl wants to recapture his belt, he will have to get past England’s Stuart Austin.

Over the last eighteen months, the EFC organization had shown a strong dedication to the women’s divisions. The promotion crowned champions in three different weight-classes, strawweight, flyweight, and bantamweight.

At EFC 67 the promotion crowned their inaugural 115-pound champion. seeing Italy’s Chiara Penco take home gold with an exciting and grueling performance over South Africa’s Danella Eliasov. “Beasty Barbie” racked up another win on the Italian regional circuit while waiting on the next challenger to her EFC crown, submitting Elena Andruschenko under The Golden Cage banner.

Now sporting a perfect 4-0-0 record, and a 100% submission rate Penco looks for her third triumph this year. The Italian was expected to face Cheyanne Vlismas, however, Vlismas had to withdraw from the contest due to medical complications. Replacing her on less than two weeks’ notice will be England’s, Karolina Wojcik. In another historical move by the promotion, the bout will mark the fourth time in a year and a half that an EFC event will be headlined by a women’s contest. The “Polish Assassin” hopes to follow in the footsteps of former UFC 115-pound queen, Joanna Jedrzejczyk, by being the second Polish woman to capture a Strawweight title for a major mixed martial arts organization. If Wojcik (3-1-0) hopes to take the EFC title back to England, she will have to avoid the punishing striking and aggressive submission attacks of the reigning strawweight queen of the EFC.

Ruan Potts (11-6-0) burst on to the South African MMA scene in 2011. Competing solely for Extreme Fighting Championship, Potts compiled an impressive 8-1 mark. In his ninth appearance for the EFC, “Fangzz” captured the heavyweight title. He did so with a 44-second submission victory over then champion Andrew Van Zyl. The win would earn him an invitation to the UFC. Making him the first EFC competitor granted a contract with the industry leader.

The experience would not be a good one. The Judo black belt would lose all three of his contests under the bright lights of the Octagon. Potts would return to EFC in 2015. In his return, he dropped his next two bouts. One of which, included a failed bid for the promotion’s Light Heavyweight title. The loss put him on a five-fight losing streak. He has since gone on a three-fight run, all by stoppage. Potts could be one win away from a shot at reclaiming his heavyweight crown.

Standing in his way is well-traveled American Jared Vanderaa. Vanderaa (7-3-0) is no stranger to championship fights. After opening his career with five straight stoppages, the Washington native was awarded a shot at the vacant LFA heavyweight belt, but it was not to be. He would eventually yield to Richard Odoms, bowing out halfway through the fifth and final round. Vanderaa would pick up one more stoppage victory on the regional scene before once again vying for another title. This time in South Africa.

At EFC 66, the A.F.C. representative would challenge Andrew Van Zyl for the undisputed heavyweight title, once again falling short of his goal. After the split decision setback to Zyl “The Mountain” got back on track at EFC 73, stopping Elvis Moyo with strikes in the second. Now booked for another championship bout, Vanderaa hopes that the third time is the charm.

In another featured heavyweight clash, former EFC kingpin Andrew Van Zyl looks to get back on track after relinquishing his EFC belt to current Light Heavyweight Titleist, Dalcha Lungiambula at EFC 71. Van Zyl (16-4-0) has won eight of his last ten appearances for the EFC, but his last two bouts ended in split decisions, with one going his way and the other resulted in him leaving the cage without his heavyweight crown. “One Gear” would no doubt seek a finish before the judges enter into the picture. Zyl meets Stuart Austin. Austin (12-5-0) challenged for the 205-pound title in his last appearance for the EFC, losing via TKO at EFC 65. Austin has dropped two of his last three outings. If “Champion” wants to live up to his nickname, he will have to first get past Van Zyl.

EFC 76 airs live, this Saturday, December 9th on DAZN. The event begins airing at 2:30 PM (EST) for audiences in the United States.