Saul “Canelo” Alvarez is set to step inside the ring for the second time in 2018, against British boxer Rocky Fielding, as he moves up to 168 pounds in a title bout for the WBA (regular) Super Middleweight championship on Saturday, Dec. 15th, at Madison Square Garden, New York.

This time, however, Alvarez (50–1–2) will not be fighting as an HBO PPV boxer, but under the new streaming service, DAZN. The Mexican boxer signed a five-year, 11 fight deal worth at least $365 million. Alvarez defeated Gennady Golovkin earlier in the year via Decision (Majority) in a bout in which he ultimately won the WBA (Super), as well as the WBC middleweight titles. He will now be looking to become a three-division champion as he challenges Fielding (27-1) for the WBA (Regular) Super-Middleweight title.

In what will be a memorable night at “The Garden”, Alvarez can also change the sport of boxing as we know it. The biggest pay-per-view star since the Floyd Mayweather era will be making the move from PPV to a streaming service. In the past, fans would expect to pay around $80 for a PPV boxing event, instead, they are entitled to a 30-day free trial to watch the fight online via the streaming service DAZN for $9.99.

Rocky Fielding, on the other hand, will be looking at the biggest fight of his boxing career. The British star will be looking to shock the world in New York. Fielding, who is coming off a win over Tyron Zeuge via TKO in the fifth round will look to extend his 6 fight win streak as he steps inside the boxing ring for the first time on American soil.

Saul “Canelo” Alvarez is set to take place on Saturday, Dec. 15th at Madison Square Garden in New York City, New York. The fight is available via a variety of platforms like the online streaming service DAZN, Apple TV, Xbox One, Playstation 4, as well as via web browsers on DAZN.com 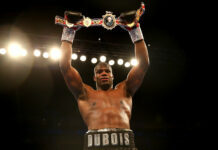 Under 25: Top 5 British Prospects in Boxing

Report: Mike Tyson vs. Roy Jones Jr. to be Promoted by CES