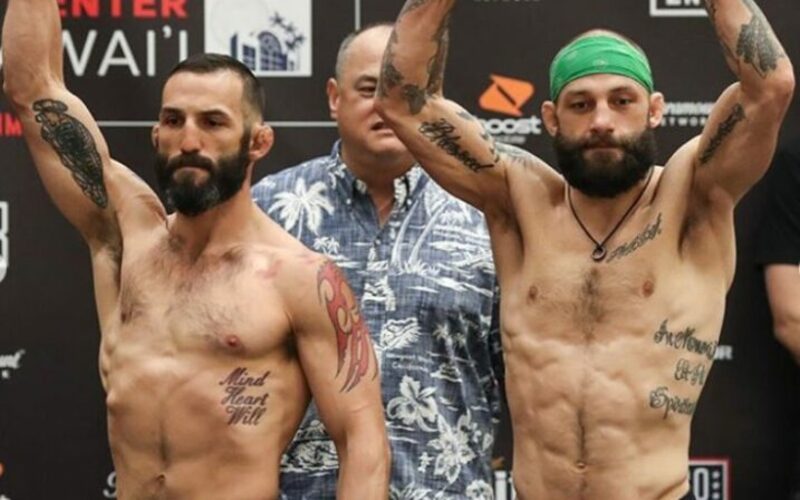 Bellator’s trip to Hawaii brings a host of new experiences to fans and competitors alike. For the people of Hawaii, they get to enjoy a major mixed martial arts event on home soil. Since the creation of this sport, no major organizations scheduled events on one of the islands. Bellator’s Salute the Troops card is the first ever large-scale event to be held on the island’s soil. The following day, Bellator 213 takes place in the same area. Hosting two events in Hawaii allows more fans to enjoy the greatness that is the sport of mixed martial arts on such a high-level talent wise.

On the other end, the Salute the Troops card allows a different opportunity to Bellator veteran Derek Campos as he makes a foray into the featherweight division. Upon moving down a division, Campos takes on promotion newcomer and a veteran of another major promotion, Sam Sicilia. While the task of traveling a long distance, cutting weight to a new division are complicated matters, they become even more so when taking on a fighter such as Sicilia.

“I knew (Sam Sicilia) was a veteran, he’s had some scraps, he’s a tough guy. I was honored to take the fight. It was one of those fights where it was like ‘Yeah let’s do this. Let’s make this happen.’ I’m not one of those guys, I’m not a picky fighter. I don’t just pick and choose based off whether this guy’s a tough fight or an easy fight. I look at the guy, whatever fight Bellator matches me up with I trust that they believe it’s going to be a great matchup and I just go to work.”

As for the fight itself, both Campos and Sicilia hold a healthy portion of MMA experience. They have 50 professional fights between the two of them. Of the 50 wins, their records combine for 34 total wins. Despite the massive amount of cage time the two possess, Campos believes the two will enter the cage for an all-out brawl.

“I feel like given Sam’s style and my style I feel like they’ll be experience and technique and craftiness as you would call it. At the end of the day, I think we’re both going to go in there and look to drop some bombs and trade some leather. So I believe it’s going to be an exciting fight. I don’t think it’s going to be an all-out technical chess match. I think it’s just going to be a good ol’ fashion scrap. It’ll all come down to who implements their technique during that scrap better.”

This change in division for Campos brings forth new matchups and better opportunities. Bellator’s lightweight division, while having the necessary pieces, lingered in a place of uncertainty for quite some time. Champion, Brent Primus laid dormant since earning his title against Michael Chandler at Bellator NYC. The division is only reigniting the engines at Bellator Salute to the Troops. There Primus defends his title against the man who he took it from.

At featherweight, Campos has more options. Instead of having to book rematches and stale matchups, featherweight holds numerous young and talented fighters quickly rising to the top of the division. He believes, with his resume, there are only a few impressive performances separating himself from title contention.

“A win here, a decisive win. A straight mauling will put me at the top of a new division, the featherweight division. I guess I am kind of stepping away from that lightweight division for a minute because its, I mean there’s a whole lot going on. We finally have Chandler and Primus squaring off and then you’ve got guys like Benson Henderson and Roger Huerta. But right now, the matchup that makes sense for me are going to be in the (Featherweight) division because its just completely stacked with [talented] guys. A win here, a decisive win I think will send a message to the division. It will definitely get me back to where I want to be, in the win column.

It is exciting, you got guys [like], AJ McKee, Aaron Pico, you got Emmanuel Sanchez, a whole list of guys that are just especially skilled in their own ways, their own martial arts. Each one of them is super dangerous, none of them are easy fights. But, if I can get the matchups that I want then it’ll put me right where I want to be. And that’s fighting for the strap at 145 lbs.”

When it comes to the new weight division, Campos is confident in his ability to make the 146 lb. limit. The veteran fighter believes his method for cutting weight to the lightweight limit only needs a few modifications to get him down to featherweight.

“I’ve been kind of sticking to my same regiment, my same diet. Pretty much sticking to the same process, and gotta just squeeze out a little more water out of my body. So we will see. I haven’t changed much up. I’m doing a bit more cardio, I do kind of lay-off the strength portion, the weights… I do this all on my own, I don’t have a dietician, strength coach, or anything, I do it all on my own. [Also] I do my own research. I’m going with the flow, so to speak, what feels natural, what feels good, listening to my body, my mind, my heart. [I‘m] just taking it one step at a time. So far, I feel good, I feel strong, I feel fast, I feel light. Come December 14th, I feel like I’m going to go in there and put on a great, phenomenal performance.”

Nothing drastically changed. Unlike many other fighters, Campos did not go through a trial and error process. He truly believed the weight would come off accordingly.

“When I do that same regiment, same routine, I’ve woken up the morning of at 152, 151. I’m still pretty hydrated. I feel like if I stick to the same routine, I’ll be able to go to the sauna or put on the sauna suit and just walk it out, sweat it out and get the last few pounds off. No trial and error just going off what I normally do, what I am confident with, just going to push it a little further.”