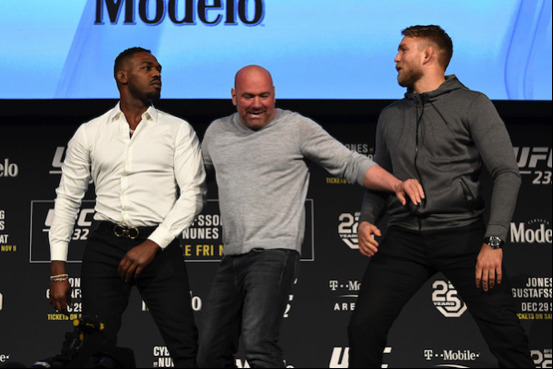 The bright lights of Las Vegas await alongside some incredible fights, but which way will the go?

Heading into the New Year with a win will be huge for every fighter, setting the tone for the fights to be made throughout the year. So, how’re the bookies seeing it?

Most are already welcoming many bets across various states, with Draftkings offering fantasy odds on most fights. They’re available in Nevada so if you’re heading to UFC 232 yourself you really can make the most of your time there.

You can check out the Draftkings sportsbook review for further details while we have a look at where the odds are pointing to before thousands touch down in the T-Mobile Arena.

Amanda Nunes could become the first woman to hold a title in two divisions as the Bantamweight Champion takes on Cris Justino in what could be a real firecracker.

She goes into the fight as an underdog with Justino 4/11 favourite with bookie Betfred having not lost since her first ever fight back in 2005.

The Brazilian has twice defended her belt successfully is expected to do the same again.

The trash talk is already in full flow with Justino branding Nunes a traitor for calling herself American Top Team despite hailing from Brazil.

It’s going to be a tough fight for both, with Justino likely to try and end the fight with either punches or the knees, just as she has in 16 of her 17 victories.

That’s clearly what places her as the favourite for this particular fight, with Nunes more a mixed bag when it comes to method of victory.

It’s going to be as just as bigger fight as the headline event which will see Jon Jones go up against Alexander Gustafsson.

Jon Jones has successfully regained his mixed martial arts licence this week so his rematch with Alexander Gustafsson is on.

The pair first fought back in 2013 and it’s expected to be the main event on December 29.

That fight ended in a Jones win, where he successfully defended the UFC Light Heavyweight Championship. He’ll be looking to win that title back with the belt expected to be handed out at UFC 232.

Jones hasn’t fought since his no contest result against Daniel Cormier last year after failing a drugs test but goes into the fight as a hot favourite with the bookies.

He’s priced at 1/3 currently with Ladbrokes, but Gustafsson will also be looking to extend a run of two straight victories, his last being named Fight of the Night.

One thing is for sure, there will be fireworks. Their bout five years ago is often lauded as one of the best fights in history and revenge will certainly be sweet for Gustafsson, who has been waiting for this moment ever since.

Ring rust could of course be an issue for Jones, who has been out for 15 months, which makes this an even more intriguing tie.

It’s certainly Dana White’s way of leaving 2018 with a bang, and 2019 looks all set to be another humdinger if the rumoured match-ups are true.