In 2018, RIZIN Fighting Federation had their best year yet. Hosting more shows than ever before, RIZIN gained more fan attention than they have ever encountered over the course of twelve months and six stacked events.

They topped headlines with massive super fights, they continued their work with Bellator MMA to set up a legitimate title vs. title superfight, they created their first official world titles, they had Floyd Mayweather fight in a RIZIN ring, and so much more.

Here on MMASucka, RIZIN’s best KO, Submission, and Fight of 2018 will each receive their own articles. But what about everything else?

From the year’s best entrance, to the best debut, here is a big mash-up of RIZIN 2018 Awards.

The answer to all of those question are down below. Let’s get started.

Event of the Year: RIZIN 11 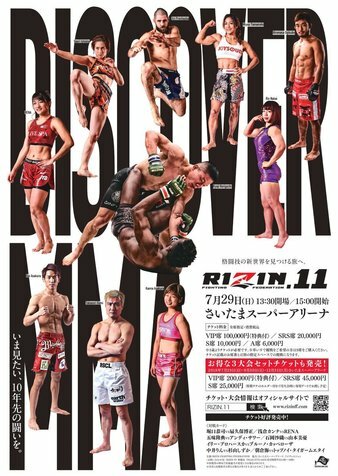 Throughout 2018, RIZIN had three legitimate Event of the Year contenders – and that’s covering all of promotions. RIZIN 11, RIZIN 13, and RIZIN 14 were all truly exceptional shows with unmatched atmosphere and incredible build.

But it’s RIZIN 11 that takes the cake for this category. It was incredible from top-to-bottom, featured a tremendous amount of great finishes, and the fights that didn’t go the distance were also great.

On the show we saw Jiri Prochazka vs. Bruno Cappelozza, Takanori Gomi vs. Melvin Guillard, and Topnoi Tiger Muay Thai vs. Tadaaki Yamamoto. Not only did these fights end by way of a brutal first-round knockout, but they also gave us three serious round of the year contenders. That should give you an idea of what this night had in store for the fans.

RIZIN 11 featured the four fighters who have competed the most in RIZIN history in the form of Kyoji Horiguchi, Kanna Asakura, Rena Kubota, and Jiri Prochazka. It was the first ever RIZIN event to be headlined by a women’s MMA bout, this being the rematch between Kanna Asakura & Rena Kubota.

It was a historic night for the organization, and arguably their best of all time. Ironically enough, the show also featured one of the worst fights in the organization’s history; Boldpurev vs. Shibisai.

Entrance of the Year: Andy Nguyen at RIZIN 13

This is a no-brainer. Andy Nguyen always takes full advantage of the RIZIN platform and makes her entrances fantastic, but she took it up a notch at RIZIN 13.

Coming out to Michael Jackson’s “Smooth Criminal,” she killed her entrance. With non-stop dancing from the top of the stage all the way down to the ring, Nguyen also wore the signature hat and single white glove that Michael Jackson was known for back in the day.

It was tons of fun, and undoubtedly the best walkout of 2018. She lost the fight, but she gained tons of fans with that killer entrance.

There were a few obvious standouts for this one, but given the importance of the Horiguchi vs. Caldwell bout, this had to be the victor.

Known for his wrestling, the American former NCAA Champion and current Bellator title-holder Darrion Caldwell was dominating the striker Kyoji Horiguchi due to his wrestling attack. Caldwell seemed well on his way to winning a decision in front of Horiguchi’s home country fans.

But in round three, as Caldwell looked to continue his smothering top game, Kyoji Horiguchi grabbed what appeared to be a relatively loose guillotine choke. But after providing a bit of a squeeze, to the surprise of everyone, Darrion Caldwell tapped out.

Kyoji Horiguchi won his 11th straight and became the first ever RIZIN Bantamweight Champion thanks to this slick come-from-behind submission win at RIZIN 14.

There is really only one answer here. Having not won a fight in five years, and on the heels of six straight losses, Japanese legend Takanori Gomi took on a way overweight Melvin Guillard at RIZIN 11.

Despite Guillard being on an equally terrible streak as of late, he had Gomi stunned at multiple points early on with his punches. The tide turned, however, when nearly three minutes into the opening round Gomi landed and sent Guillard reeling. This allowed the legend to flurry with punches, and amidst the chaos, he slept Melvin Guillard near the ropes.

This gave us one of the loudest RIZIN crowd reactions of all time, and it was truly an epic moment. One of the best of 2018 for sure, regardless of promotion. Known for his hands early on in his career, this was the first time “The Fireball Kid” had scored a knockout win since 2012. Ironically enough, though with the UFC, that was also in Saitama, Japan.

Now, the whole world knows that “Killer” Luiz Gustavo is the real deal.

But prior to his RIZIN 12 fight against Yusuke Yachi on barely two weeks’ notice? Not much was known about the Wanderlei Silva pupil, other than the fact he had a knack for the KO on-paper. But it was a relatively unknown Brazilian vs. one of the top fighters in RIZIN Fighting Federation.

The unbeaten Gustavo proved his worth early, showing off a very Wanderlei-esque style against a fellow brawler in Yachi. But in round two he was able to catch the Japanese fan-favorite with a shovel hook of sorts to put his lights clean out.

It was Luiz Gustavo’s first and only bout in RIZIN thus far, but what a massive win it was for him.

Part of me was seriously considering giving Gustavo this award as well. But, I decided against it.

In MMA, the men’s strawweight division is a wasteland outside of Asia. So the division’s elite – though phenomenally talented – are few and far between. When Haruo Ochi met Mitsuhisa Sunabe at RIZIN 13, it was arguably the best match-up in the division’s storied history.

The two met, and it was a compelling and exciting match-up. There was nice striking exchanges, beautiful ground scrambles, but the finish came in round three. Haruo Ochi went body-head and dropped Sunabe with a massive overhand right before sleeping him with two follow-up soccer kicks.

It was a phenomenal first fight in RIZIN, and the best debut of 2018 when you consider who he did it to and his respective division’s rankings.

Another clear one here.

Kyoji Horiguchi competed four times on the year, all in RIZIN, and his one loss was a kickboxing bout vs. a 27-0 Tenshin Nasukawa. This while Horiguchi had never competed in kickboxing before, and even this was competitive.

The American Top Team representative is seriously an incredible talent and may already be the best fighter in Japan’s history. He has won eleven-straight, eight-straight in RIZIN despite only being in the promotion for well under two years.

In 2017 he added a RIZIN Bantamweight World Grand-Prix Championship to his resume, and he closed out 2018 in even more impressive fashion.

His 2018 consisted of a ten-second KO against Ian McCall, a dominant decision win against Shooto title-holder Hiromasa Ogikubo, and a come-from-behind submission win over Bellator champion Darrion Caldwell to win the first ever RIZIN Bantamweight Championship.

It was a remarkable year, and in 2019 he heads to Bellator for a shot at Caldwell’s Bellator gold in a rematch.

*records shown are exclusively within RIZIN

Round of the Year: Kai Asakura vs. Jae Hoon Moon R3

In 2017 when they first met, the South Korean and Japanese sluggers went to war, but it was ultimately Jae Hoon Moon who scored a gigantic third-round knockout vs. the then-unbeaten Kai Asakura.

Now, back to his winning ways, Kai Asakura came into the rematch looking for revenge. And he was doing everything it took to get it. This included a far more grappling-focused gameplan from him.

But, in round three, we saw shades of their first meeting. And the two went to war in their final five minutes against one another. But it was the final 60 or so seconds that were pure insanity. A brawl in every sense of the word and both fighters were exhausted when the final bell sounded.

Moment of the Year: Tenshin Nasukawa vs. Kyoji Horiguchi

When you think of superstars within RIZIN, it’s a near guarantee that the top two names on your mind will be Kyoji Horiguchi and Tenshin Nasukawa.

One fighter, Horiguchi, is an elite mixed martial arts fighter, and the other, Tenshin, is one of the best kickboxers in Japan. Considering that Kyoji Horiguchi within MMA is a striker, the thought of the two fighting one day has been on the minds of everyone for the past year.

It was a moment many thought would happen – eventually. But not only did it happen, it happened this year. The aura surrounding this fight was next-level. No funky ruleset, no exhibition, this was a straight-up kickboxing contest between two of the biggest stars Japan has seen in the world of combat sports in quite some time.

From entrances to the final bell, this had a superfight feel unlike just about anything else in 2018, regardless of sport or promotion. It was an unreal spectacle and an unreal fight.