Look out for Devonte Smith at UFC 234 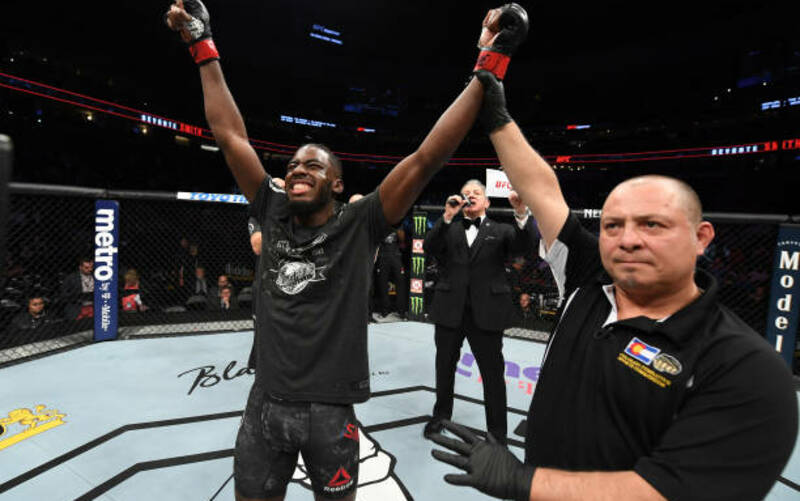 UFC 234, in its current state, is not a fight card that is getting much mainstream attention. Aside from the main and co-main events, there aren’t many fighters on the card with much name value. But, there are plenty of up-and-comers on the card looking to make a name for themselves. Devonte Smith is one of these fighters, as he is looking for a breakout moment.

Devonte Smith Could Shine at UFC 234

Devonte Smith first stepped into the UFC scene on the season two, week eight episode of Dana White’s Tuesday Night Contender Series. He earned himself a UFC contract with a first-round knockout of Joe Lowry. In a fight that lasted less than three minutes, it’s hard to come away with too much analysis. Yet, Smith did show a few tools in that fight.

Fight on the Contender Series

The most obvious takeaway from Devonte Smith’s fight on the contender series was his commitment to the jab. His 76″ reach is quite long for a lightweight, and he is sure to use every inch of it. Against a heavy-handed opponent, ‘King Kage’ used his jab well. It kept him out of range and left his opponent off balance. His jab is centered much more around speed than power, as he’s not going to do any major damage with just one. But, he split Lowry’s guard with multiple jabs, which allowed Smith to set up his leg kicks. Over time, a jab like Smith’s will definitely open up an opponent and allow him to land some power shots.

After Lowry gave more respect to Smith’s jabs, Smith’s outside leg kick really came in to play. Smith landed a few solid leg kicks throughout the fight, but one in particular really did damage. As Lowry was blocking Smith’s punches, Smith came with a hard leg kick that buckled Lowry’s leg. This went a long way for Smith, as it not only knocked Lowry off balance but also opened Lowry right back up for a quick but powerful combination that followed. His quick jab and sharp leg kick mixed with quick foot speed provide Devonte Smith with a nice skill set on the feet.

Smith made his official UFC debut at the UFC’s 25-year anniversary card in Denver last November. Once again, the fight didn’t last very long. Devonte Smith knocked out fellow Contender Series alumnus Julian Erosa 46 seconds into the first round. In this fight, ‘King Kage’ again showed off the speed of his striking. This time, he showed off some of his power too. In a flash, Smith countered Erosa with two jabs and a right straight that Erosa never saw coming. The right put Erosa down, and after a few very hard shots on the ground, the fight was stopped. Smith’s speed mixed with the power he possesses in both hands makes him a very dangerous striker, whether it be counter-striking or pressuring his opponent.

Smith’s opponent Dong Hyun Ma is no stranger to taking and receiving damage. He does, however, have some holes in his game that Smith will likely be able to capitalize on. As it currently stands, Smith is roughly a -270 favorite in the fight, for reasons we will get into.

The most obvious take away from Ma’s most recent fight against Damien Brown is how susceptible he is to leg kicks. Multiple times throughout the fight Ma was knocked off balance to leg kicks, two times he was completely taken off of his feet. The speed of Brown’s leg kicks is nowhere near the speed that Smith fire’s them off. Ma did manage to check a few kicks, but most of the time he simply absorbed them and switched stances if he had to. That could spell disaster against Smith.

With the six-inch reach, advantage Smith will have, he will be perfectly content to stay at range and throw jabs along with kicks to the body and legs. If Ma comes forward, which he didn’t do much against Brown, leg kicks will do damage when he has a majority of his weight on his front foot.

Other than his issue with defending leg kicks, Ma also held his hands dangerously low and his chin dangerously high against Brown. That, too, will not work out well for him against Devonte Smith. Again, not to sound like a broken record, but Smith’s hands are simply too fast and powerful for Ma to keep himself to open to punches.

Ma has shown many times in the past that he will not shy away from taking damage. But, with the way he was biting hard on feints against Brown, mixed with Smith’s hand speed, Ma should approach this one with a little more caution. If not, his night might not be lasting very long.

This will be Devonte Smith’s first time fighting on a pay-per-view, and he finds himself fighting last on the prelims, closing out the ESPN portion of the card. With the top two fights of the card being so good, there will be plenty of people watching. Against an opponent who has holes that play into Smith’s game, he could be on his way to a marquee moment. With another impressive performance, Devonte Smith could find himself on the radars of many more fans and fighters in the near future.