2018 was an incredibly successful year for RIZIN. Not only was it a year of exciting fights and finishes, but they also managed to sell out the famous Super Saitama Arena twice.

Floyd Mayweather vs Tenshin Nasukawa was the second sellout for RIZIN FF in 2018 (© RIZIN FF)RIZIN looks to be running six to eight shows this year. This gives them plenty of time to make some compelling fights that fans will love to see. What I hope to do with this list is convince you and the RIZIN brass why the fight should be booked. Now in no particular order:

© RIZIN FF
Gomi snapped his long losing streak by KOing Melvin Guillard and is now the prime target in the lightweight division.

Sorry UFC. The lightweight division in RIZIN is more stacked than ever. With talks of a LW Grand Prix happening this year, RIZIN has a cornucopia of fighters to pick from. They can develop unsigned prospects, borrow from Bellator, DEEP, and everything in between. However there were three lightweights on the RIZIN roster in 2018 that stood out from the pack. Yes, I am cheating including multiple variations of a fight as one, but hopefully, it makes sense why.

“The Fireball Kid” Takanori Gomi snapped his six-fight losing streak with a first round KO over notable scale breaker Melvin Guillard at RIZIN 11 (which was voted event of the year by MMASucka).

Australia’s Damien “Beatdown” Brown also snapped his three-fight losing streak with a first round submission over brawler Daron Cruickshank at RIZIN 14 in his debut.

On the same card, Johnny “Hollywood” Case returned to Japan to spoil the hometown hero’s return. For two rounds, he dominated Krazy Bee’s Yusuke Yachi. He used Yachi’s face as a punching bag so well that Yachi’s right eye swelled up and was dripping blood. It was bad enough the doctor stopped the fight after examining it mid-fight.

After their respective fights, Brown and Case called out Gomi for a fight. I have no reason to believe that Gomi would turn down a fight with either of them.

The question is how to book the fight. Do you do Case vs. Gomi? Brown vs. Gomi? Case vs. Brown with the winner getting Gomi? Do you save them all for the LW tournament and try to have them meet that way? All possibilities are compelling match ups. They are all fan favorites who will look to bring that finish as early as possible.

The biggest factor is that they are all hungry to continue their in-ring success. All three came back from losing streaks by beating tough competition and they are going to look to become the top LW in the promotion. There is no timetable for how much longer Gomi plans to fight but I can’t believe it will be much longer. It would be better sooner rather than later to get these matchups ready. They want them. Fans want them. Work out the kinks and make it happen.

Gabi Garcia vs Shinobu Kandori has already been booked twice previously, but had to be canceled both times.

One woman who has been completely dominant in her RIZIN career is openweight fighter Gabi Garcia. A former ADCC 3x gold medalist, her transition to MMA has been smooth as silk. She has finished all but one of her opponents (that one fight in ended in a NC due to an accidental eye poke). Her stand up as well has improved since her first fight. She is a lot more controlled and crisp in her boxing, rather than wildly punching when she first started. As she continues to walk through her opponents, matchups for her are tough to find. Very few opponents want to face her and it’s very difficult to sign decent fighters similar to her size.

For fans of joshi wrestling, Shinobu Kandori, 54, is near god tier status. Considered one of the best women’s wrestlers of all time, she wrestled for Ladies Legend Pro-Wrestling. This promotion put on both pro wrestling matches and MMA matches (that may have been also pro wrestling). Her most famous match was a bloody affair against Akira Hokuto at All Japan Women Dreamslam on 4/2/93. The match got five stars from pro wrestling journalist Dave Meltzer and I highly recommend it even if you are not a fan of wrasslin’.

While also with LLPW, she had five MMA matches. She went 4-1, with all her wins being finishes in the first round. One of her wins was against 6’4″, 300 plus pound Russian judo champion Svetlana Goundarenko (fight starts at 10:00). It’s entirely possible this fight, along with her others, was worked. Let’s presume for argument’s sake they were all legit.

Two previous occasions have seen an attempt to book Garcia vs Kandori. First was on December 31, 2016. Kandori suffered a rib injury forcing her to pull out of the fight and being replaced by fellow pro wrestler Yumiko Hotta. After Garcia put a beatdown on Hotta and won, Kandori entered the ring challenging Garcia AND German pro wrestler and MMA fighter Alpha Female.

The second attempt was a year later December 31, 2017. The fight was canceled due to Garcia missing weight by 28 pounds. Yes, 28.

On December 31, 2018, at RIZIN 14, Garcia tapped out kickboxer Barbara Nepomuceno. After the fight, Kandori entered the ring again trying to attack Garcia and challenging her.

For December 31, 2019, why not try again? If this were pro wrestling, we would have to applaud the booker for the great, slow build. Now the payoff has to happen.

Does 5’7″ 165 pound Kandori stand a chance? Probably not. She has all the disadvantages physically and skill wise. But she has shown absolutely no fear confronting Garcia and other opponents bigger than her. Kandori wants this fight and Garcia said she will take on anyone. As Mark Twain said, “It’s not the size of the dog in the fight, it’s the size of the fight in the dog.” There’s a reason why Japanese audiences rally behind fighters who have “fighting spirit.” The audience loudly cheered Hotta’s name after the bell rung for her fight against Garcia. There will always be that glimmer of hope that Kandori, the underdog, can defeat the massive favorite, Garcia. Imagine the headlines if 54-year-old Kandori (who also is a politician in the Japanese Diet) was able to beat the undefeated Garcia.

Haters can make all the “granny freakshow fight” jokes all they want.  Deep down though, they know they will tune in to watch and retweet the GIFs.

Vitaly Shemetov vs. Anyone

A lot of MMA fighters do not know how to harness positive attention on social media. Fighters like former interim UFC welterweight champion and notorious troll Colby Covington thinks giving spoilers on “The Last Jedi”(WARNING: Spoilers for “The Last Jedi”) somehow makes him a money drawing heel.

“The Dancing Russian” is currently on a 10-fight win streak with his most recent win coming in 2017 against journeyman Shannon “The Cannon” Ritch. He had one fight after against Rakim Cleveland that went to a no contest.

Using mainly Twitter, he has posted crazy training videos that have wowed fight fans. Among his training videos are him running in the frigid Russian snow shirtless and without pants and chopping at a tree stump with an ax while wearing a RIZIN hoodie. He also directly interacts with fans and posts in English, Russian and Japanese. He’s even gotten fans to change some of their Twitter names to “Shemetov to RIZIN” along with using the hashtag #RIZINShemetov. He has a crazy, charismatic personality and he shows it to full effect.

But who does he fight? Jake Heun has offered to fight Shemetov asking him if he wants to “restart the cold war?” That would be a banger of a fight and would be a good test for Shemetov.

At this point though, fans want to see Shemetov in RIZIN so bad you could pit him against anyone. Bruno Cappelozza and Karl Albrektsson would be other great options at light heavyweight. If he were to fight at heavyweight, Roque Martinez would be an exciting matchup.

All in all, I’m saying book this man! Shemetov has earned a fight with RIZIN by now through his great social media game. Other fighters could learn from him. It’s time for him to get his chance and show that he belongs in a RIZIN ring. 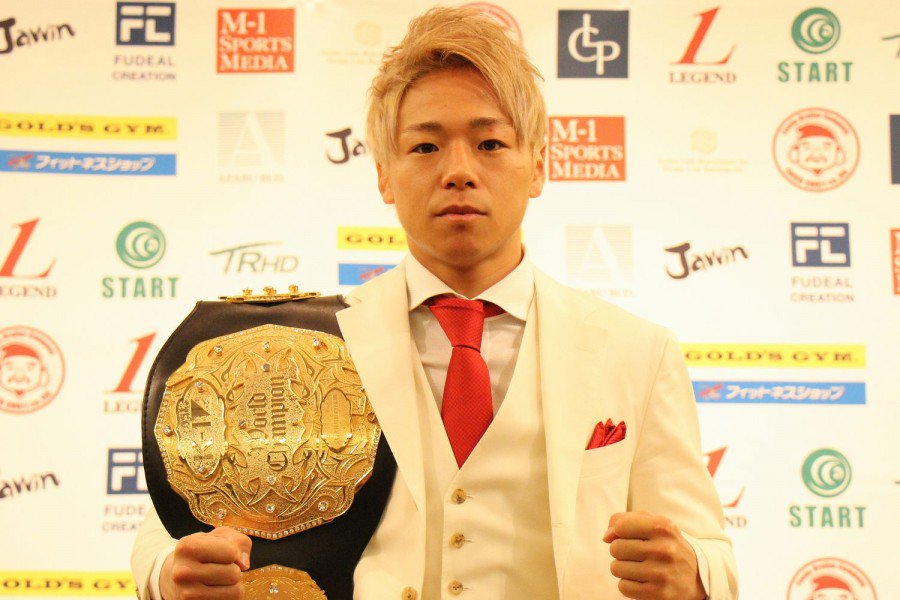 Undefeated kickboxer Tenshin Nasukawa shot up to international fame with his highly touted exhibition boxing match against Floyd Mayweather. Though he lost in the first round, his name became more known to fight fans. But, there’s someone who has been wanting to take a crack at the kickboxer from for a long time: K-1‘s Takeru Segawa.

Takeru, the current K-1 super featherweight champion, is 36-1 with 21 brutal finishes. He’s an orthodox fighter. He’s known for his serious, cold demeanor before the fight starts. When the bell rings, he smiles as he puts a beatdown on his opponent. He also has not shown respect to his opponents in the pre-fight hype. He has been in quite a few press conference scuffles with his opponents and has declined glove touches.

Tenshin Nasukawa is the opposite of Takeru. The RISE featherweight champion is a southpaw fighter. He’s all smiles before the fight but as soon as that bell rings, he clicks into fight mode. He shows respects to his opponents on multiple occasions, bowing to them, touching gloves, and praising their fight ability. He has a very convivial personality.

Both are young (Takeru is 27 and Nasukawa is 20). Both are champions for their home kickboxing promotions. And both are considered two of the best in the world and fans want to see who is the best of the best.

The only bump in the road is promotion politics with RISE, K-1 and RIZIN. You can go to Nasukawa’s or Takeru’s Wikipedia to see a rundown on how difficult it has been to get an agreed fight. It involves contracts, fight promotion, and a lawsuit. If you thought Khabib vs. Tony Ferguson was a difficult match to get off the ground, this might overtake that.

As for the fight, 2019 is the year it should happen. It has potential be the biggest kickboxing fight since Masato vs Kid Yamamoto. RIZIN has the biggest international reach potential compared to RISE and K-1. For them to host it would be the most ideal as it could get the most eyes (and also an opportunity to have it at the famous Super Saitama Arena).

With both fighters on long winning streaks, a loss for either could derail the draw of the fight. Also, a little thing called the 2020 Summer Olympics will also be going in Tokyo. Nasukawa was offered an opportunity to train on Japan’s boxing team, but he turned it down. He could potentially change his mind or a spot could be offered to Takeru. Either one accepting a spot would halt the potential fight for a few more years.

It would be one of the most hilarious fights of all time.