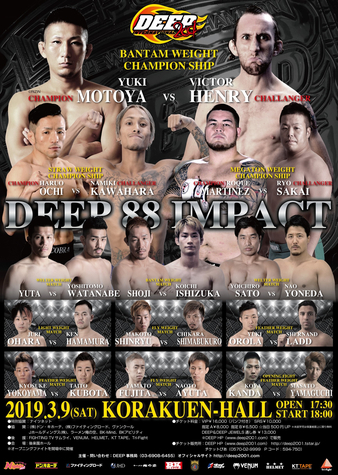 Immediately following DEEP JEWELS 23 on Friday night, DEEP 88 Impact will begin in the early hours of Saturday morning. And the show is loaded, with veterans and three great title fights.

The event will stream live on Youtube and feature numerous RIZIN veterans.

In the main event, one of the best Japanese fighters on the planet, Yuki Motoya, will look to defend his DEEP title against UWF x USA athlete Victor Henry. The two other title fights on the card feature Roque Martinez defending his megaton championship and Haruo Ochi defending his strawweight title.

Other names that will be featured on the show, in non-title bouts, include; Juri Ohara, Shoji Maruyama, Yuta Watanabe, and Yamato Fujita, among others. Check out the full card (and results) below.