Bayou Fighting Championship is bringing MMA back to Tangipahoa Parish (southeastern Louisiana) after a near four year absence of the sport. A lot of that has to do with current UFC featherweight Kurt Holobaugh. Louisiana in general is an absolute hotbed for MMA, with two UFC champions coming from the state; Daniel Cormier and Dustin Poirier are both from the city of Lafayette. Many of the first UFC events took place in Louisiana. It was one of the first safe haven states for the sport.

The history of MMA in Louisiana on a major scale can be traced all the way back to UFC 16 (March 13, 1998). Frank Shamrock defeated Igor Zinoviev via KO (slam) to win the middleweight championship. Pat Miletich won two fights on the night to win the lightweight tournament. The UFC returned 10 months later for UFC 18 which featured Miletich defending his title against Jorge Patino.

One of the earliest voices for the legalization of MMA and combat sports is co-owner of Bayou Fighting Championship Joe Ancona. Ancona was the driving force behind the sanctioning of kickboxing in the state in 1981 and MMA in 1995. Some of the products of Joe Ancona’s Gym include UFC veterans Pat Berry and Melvin Guillard. Ancona was the first voice brought into legislation to legalize combat sports in the state. Another fighter from the state who was greatly influenced by seeing Ancona in action from his world championship kickboxing days is UFC veteran and Bayou Fighting Championship co-owner Tim Credeur.

The biggest name in MMA in the area is without a doubt Kurt Holobaugh. After a time as the Titan FC featherweight champion, Holobaugh showcased his skills on the Dana White’s Tuesday Night Contender Series. He finished Matt Bessette via first round knockout to earn himself a UFC contract. Holobaugh competed for XFC Louisiana in the area, bringing the action and notoriety of MMA with him. He also won the organization’s featherweight title in August 2013.

Holobaugh’s Rise to the UFC

After several fights on the local circuit in Louisiana and Mississippi, Holobaugh made his debut on a big stage, taking on Pat Healy at Strikeforce: Marquardt vs. Saffiedine in January 2013. Though Holobaugh suffered the decision loss, his tenacity and hard work earned him a spot on the UFC roster. His next challenge was PFL finalist Steven Siler at UFC 159: Jones vs. Sonnen in April 2013. Holobaugh took another unanimous decision loss but had another good showing under the bright lights. After a couple first round finishes on the Louisiana regional scene it was off to Titan FC. Holobaugh really made a name for himself on a national level at this point.

After his impressive Titan FC run which saw him earn the featherweight title, Holobaugh returned to the UFC, placing Tangipahoa back on the Louisiana MMA map. “With me making it to the UFC and fighting on the big stage, it just shows other guys in the area that have dreams of fighting in the UFC, with hard work and no matter where they are from they can achieve those dreams,” Holobaugh stated.

Bayou Fighting Championship will return MMA action to the area on May 18, 2019 with their Bayou FC 37: Ponchatoula card. The main event of the evening will feature one of Holobaugh’s brightest stars in Michael McDonald. His opponent for the night is the 48 professional fight veteran, Rey Trujillo. The co-main event will feature two heavyweights as Gladiators Academy’s own Brandon Hebert takes on a Gracie United brown belt in Nunzio Camarata. This match-up will be for the Bayou Fight Championship heavyweight title.

The main event of the amateur portion of the card will feature one of the South’s hottest prospects, featherweight Nakia “The Great” Brown. Brown represents the very popular TWebb MMA as he takes on Johnny “Jocko” Smith from Blacklist Martial Arts. Both of these deadly mixed martial artists have the ability to stop the bout at anytime. Can Brown continue his onward march of dominance toward the major stages of MMA? Can Smith become the first roadblock in the youngster’s career?

In the debut section of the card, Gladiators Academy bantamweight, Abram Sellers, will turn pro as he takes on Jon Yarborough. Sellers relinquished the Bayou FC bantamweight title which he won in a fight of the year candidate against Logan Speyrer in order to turn pro. Sellers’ amateur career consisted of several first round finishes by both KO/TKO and submission, showing his versatility to turn pro. Both of Yarborough’s previous professional fights have been contested in Northern Louisiana. This will be his first professional bout in Southern Louisiana. 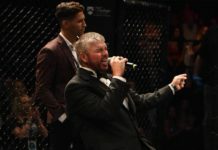 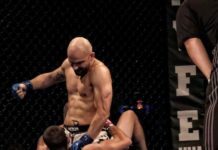 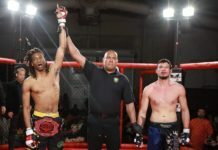