Former UFC heavyweight champion Stipe Miocic is finally getting a chance to reclaim gold. The plan since last July seemed to be for former champion Brock Lesnar to challenge Daniel Cormier for the title. ESPN’s Brett Okamoto reported tonight that Lesnar has decided to retire. A few hours later, Okamoto broke news that the rematch between Miocic and Cormier would be taking place.

When Stipe Miocic lost his belt last July at UFC 226, he immediately expressed that he would like a rematch. A rematch for Miocic made sense, as he has the most title defenses in the history of the UFC’s heavyweight division. But, seeing what went on between Lesnar and Cormier in the octagon following the fight, it was clear that Miocic would be the odd man out.

Since that fight in July, Stipe Miocic’s name has popped up several times in fight rumors. But, he made it clear each time that his next fight would be for the heavyweight title. His wishes were definitely warranted. At UFC 227, the pay-per-view that followed Miocic-Cormier 1, Cody Garbrandt got an immediate rematch for the bantamweight title against TJ Dillashaw. Garbrandt defended the belt successfully zero times, and is in a much deeper division than Miocic. If Garbrandt deserved an immediate rematch, Miocic has surely deserved a rematch for the past nine months. 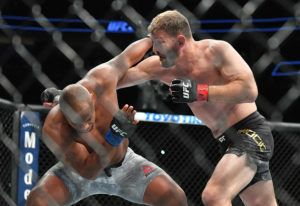 Daniel Cormier had continuously stated that he would not fight after turning 40. But, when injuries kept him out of action, it became apparent that he would be pushing his deadline back. Cormier turned 40 over a month ago, and has not given any updated retirement plans. The result of his fight with Stipe Miocic could likely determine how long Cormier plans to remain in action.

A lot of respect should be given to Daniel Cormier for taking this fight with Stipe Miocic. When DC turned down a fight with Miocic in December, but accepted a fight with Derrick Lewis on the same card, it appeared as though he was looking for easy fights and pay days before retiring. That’s all Lesnar would have been for Cormier- a big paycheck and an easy win. Now, though, Cormier seems to be putting easy fights on the back burner. Instead, he is deciding to take the fight that needs to happen, a fight that very well could determine who is the greatest heavyweight fighter of all time.