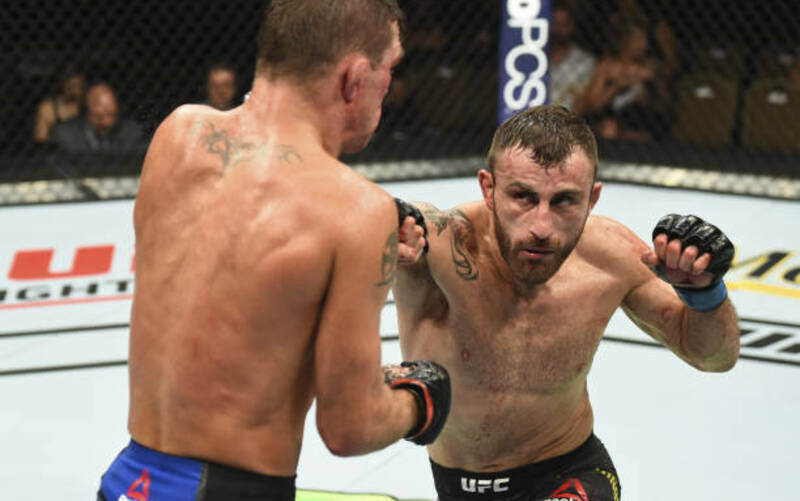 There are a lot of reasons to be excited about the current state of the UFC’s featherweight division. The champion, Max Holloway, continues to eclipse even the most renowned champions with a high level of activity and fight quality. Former champion Jose Aldo continues his retirement tour of destruction with back-to-back TKOs over Jeremy Stephens and top five contender Renato Moicano. Younger talents like Brian Ortega and Zabit Magomedsharipov have successfully transitioned from prospects to contenders. Featherweight is just a hell of a division filled to the brim with great fighters who all match up intriguingly with one another.

One of the most exciting developments at featherweight has been the technical growth of Australia’s, Alexander ‘The Great’ Volkanovski. Boasting a 19-1 record and a perfect 6-0 in the UFC thus far, the former rugby star has provided both constant aggression and measured execution in his recent outings. At UFC 232, he knocked out Chad Mendes in a thriller, which to me seemed like Volkanovski’s breakout performance. Here is a look into his technical game.

Volkanovski is a pressure fighter by design, but he has shown an ability to diversify his fairly straightforward game depending on the opponent. When the fight begins, Volkanovski tends to push forward, feinting at his opponent to push them back, and then sliding just out of range as they attempt to push forward. A lot of Volkanovski’s successful ring cutting starts with his feet, and he layers his striking on top accordingly.

>Volkanovski feints Mendes backward, and as Mendes tries to angle off to his right, Volkanovski lines up his stance and stays with him, cutting off Mendes’ exit.

A key component to successful ring cutting is keeping your feet under you and staying over your hips. Volkanovski stands in a tight bladed stance and pressures diagonally, cutting off his opponent’s exits. If they try to push back against Alex, he will angle off diagonally and attempt to counter them. Darren Elkins found himself pushed back to the fence almost immediately, and Alex countered him as Elkins desperately tried to come forward.

>Elkins feints a jab and wings an overhand right, to which Volkanovski calmly angles away to his left. Then, Elkins pumps a double jab. On the retreat, Volkanovski bends his knees and Elkins’ jab sails over his head. As Elkins’ left jab is extended, Volkanovski sneaks a right hook over Elkins’ shoulder before pivoting off his left leg to his right side.

One of the most prominent weapons in Volkanovski’s toolbox is the jab, and this tends to be one of his go-to weapons when forcing his opponents back. Unlike the stereotypical wrestle-boxer, however, Volkanovski possesses some unique tricks and tactics with his jab to keep his opponent guessing.

>Take note of Volkanovski’s bladed stance while watching his upper body. He squares his shoulders up with Elkins without compromising his stance and then darts at him with a stinging jab. In lieu of a shift into a southpaw straight left, Volk simply maintains his stance but spears his jab with quite a bit more oomph.

>Even if Volkanovski doesn’t dart forward with the jab, squaring his shoulders forces his opponent to question whether a right hand or left hand is coming behind it. Occasionally, he’ll throw the left hook instead of a jab.

>Against Mendes, Volk’s jab was arguably the single most vital tool that took apart the former title contender. Alex mixed up feints, plane of attack, and hand traps to set it up. Furthermore, he even remains defensively aware in these exchanges, attempting a pull off of his second jab in this sequence to mitigate Mendes’ counters.

At his best, Chad Mendes was a devastating and defensively sound counterpuncher, but even in his greatest performances, he had never fully conjured up a consistent solution for persistent jabs or left hooks. Frankie Edgar, Jose Aldo, and Alexander Volkanovski all troubled Mendes greatly with their jabs, since they were able to needle it in the midst of Mendes’ blitzing combinations and then angle out as he attempted to counter. Despite the speed of his entries, Mendes’ head movement in the pocket isn’t especially layered, and left hooks have been a consistent weakness of his.

>Mendes feints and pressures Volk back into the fence. Mendes leads with a rear hand uppercut, which catches Alex shelling as he tries to slip outside it. However, Volkanovski lands cleaner with a left hook, closing the door on the exchange and smashing Mendes with his right hand by his waist. Chad Mendes himself dropped the great Jose Aldo with this same counter to the uppercut.

Volkanovski’s right hand doubles as a potent offensive strike and as a distance closing clinch entry.

>Volk threw the body jab quite a bit at Elkins to disguise the level change. Notice that when Volk throws the overhand right, he takes a wide sidestep with his rear leg, weaving under the punch. If Elkins weren’t already knocked down, Volkanovski would have a double underhook in the clinch.

>In a position usually called “the anchor,” Volk and Elkins throw overhand rights simultaneously and lock up. Elkins attempts a takedown with his left arm, but Volk pivots off his lead leg and catches Elkins with another short right hook on the break.

Volkanovski tends to function best when all of the pieces of his game get rolling. Much of the Australian’s best work comes from the clinch, breaking from it, and implementing his wrestling. Volk will attack trips and takedowns, as well as fighting grips to land elbows and knees inside.

>This is a lovely sequence of offense from Volkanovski. Volk enters with a rear hand uppercut, then levers off it with a right hook as Mendes retreats into the fence. Volk presses forward, grabs a collar tie with his left and crossfaces Mendes with his right forearm. As Mendes is trying to remove the crossfaceing forearm, Volk sneaks a knee up the middle.

>Volk holds a collar tie with his left hand and holds Mendes’ left hand down with his right. With the same arm, he slaps a hard elbow on the side of Mendes’ head before going back to grip fighting.

In the clinch, Volkanovski mixes up double leg attempts with trip attempts.

>The outside trip is generally his go-to.

>I can’t seem to remember anyone bullying Mendes and Elkins as badly in the clinch as Volk seemed to. Double collar tie to control Mendes’ posture, landing a knee and a right hand on the break.

By no means is Volkanovski perfect. He lacks the positional excellence in the pocket of Jose Aldo and Max Holloway. His defense has improved, but it still has a long way to go before he can be safe in a firefight. Body attacks are still a consistent place of issue for the Australian. However, what Volkanovski does possess is a thorough, well-rounded technical game combined with an innate sense of grit and tenacity. In a division as deep and as broad as featherweight, being able to contend with an opponent at every phase boasts major advantages.

All this said, I am unconvinced that Alexander Volkanovski will be able to handle the brilliance of the former champion in berserker mode, Jose Aldo. The top position and clinch threat will likely be denied by Aldo’s flawless anti-wrestling. Jose is perhaps the most difficult fighter in MMA history to pressure, due to his ability to take wide and short pivots off the fence and his ability to intercept the entries of his opponents with counters.

Most damning is Volkanovski’s double forearm guard, which seems primed to allow Aldo to continue his rib roasting tour. Nonetheless, if Volkanovski can find a way past the Brazilian, a title shot is imminent and the entire division should be put on notice.

Daniel Martin discovered MMA in 2015 and has been an avid follower and spectator ever since. He began writing articles in early 2017 and has since become a regular analyst for himself and other passionate fan of the sport.