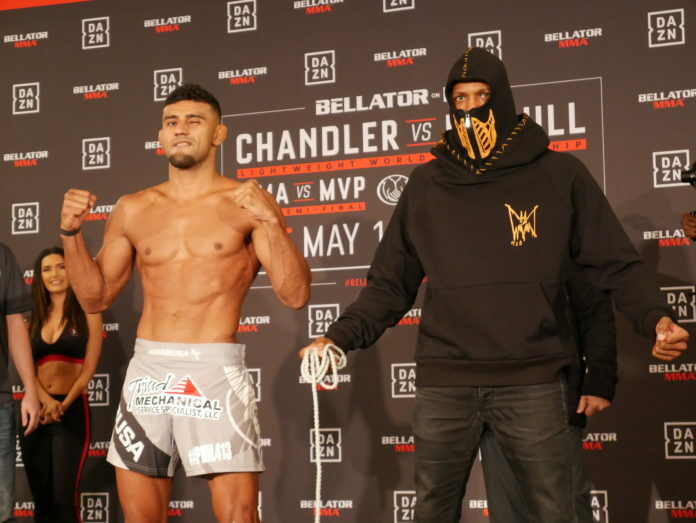 After months of anticipation, Bellator 221 will finally take place this Saturday, May 11 at the Allstate Arena in Rosemont, Illinois. The stacked card is headlined by a long-awaited bout between lightweight champion Michael Chandler and featherweight champion Patricio Freire for Chandler’s 155 lb. strap, and features a co-main event between Michael Venom Page and former welterweight king Douglas Lima. While fans and pundits have been eagerly awaiting the event, according to Lima they’re not the only ones.

Bellator’s Douglas Lima glad to be back, wants one-night tournament

“So good to be here [during] fight week, get that feeling again, cut the weight, all the media interviews, I missed it you know what I mean?” said the former welterweight champion in an interview with MMASucka, “It’s only eight months, but it seems like its been years. I’m excited to get here, I’m excited for this fight Saturday, and just, enjoying the ride.”

The eight months Lima is referring to is the last time he stepped inside a Bellator cage, which took place last September at Bellator 206 when he finished Andrey Koreshkov by submission in a quarterfinals match for the promotion’s welterweight grand prix. Having spent the majority of his career in Bellator competing in tournaments, and now facing “MVP” in a semi-final bout that will determine the next welterweight title contender, Lima is happy the company has returned to its roots.

“I actually love it, I love tournaments.” Lima stated, “I love the prize money they put in. My first tournament that I won was $10,000, second tournament $100,000, this one is gonna be $1 million so… it keeps multiplying by ten so hopefully the next one will be $10 million.”

As far as the former champion is concerned, the only downside to the promotion bringing back the format is the layoff period in between fights. In fact, if it were up to Lima, Bellator would go back to the early days of mixed martial arts where the entire tournament would take place in one night.

“This [tournament] is a little bit different than the last one, cause the other tournaments in Bellator is every four weeks you fight, this one…eight months, and I’m here waiting.” Lima said, “…One day I wanna do a one-night tournament, like three fights a night, like they used to do it back in the days, that’s what I wanna do.”

Even the though the wait has been brutal, the Brazilian is most concerned with getting the 170 lb. title back and facing whoever awaits him on the other side of the bracket.

“The main thing is to get that belt back. I’m ready, I’m ready to get this fight over with and move on to the finals.”

To see the full interview, watch the video linked above.