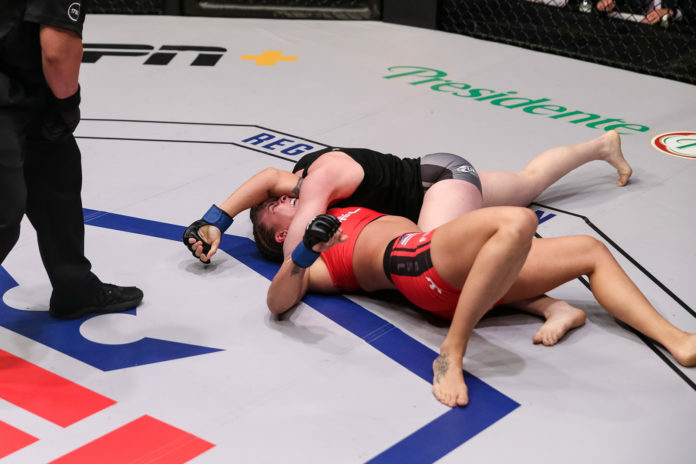 PFL Season 2, Week 1 began on Thursday, May 9 and former Strikeforce Women’s Champion Sarah Kaufman showcased why she is a force to be reckoned with in the women’s lightweight tournament.

In the second fight of the main card, which aired live on ESPN+, Kaufman went face to face with Morgan Frier. The walkouts to the cage lastest longer than the fight itself.

It took just two-minutes and twenty-two-seconds for Kaufman to sink in a deep arm-triangle choke, which earned her six points and sits her atop the women’s lightweight leaderboard. The Victoria, British Columbia native was the lone female to finish her opponent in the opening round of the tournament.

That’s all she wrote! @sarahkaufmanmma earns her first #PFLmma win, scoring 6 points by Submission by Arm Triangle in Round 1.

Following the bout, Kaufman explained her excitement to fight at her natural weight class.

“This was my first fight at 155, it felt so good to fight at a natural weight class,” Kaufman stated. “This is exactly what I wanted coming in, earn 6 points and get momentum going toward the playoffs and championship. This is the beginning of an awesome journey.”

Every PFL event will air across ESPN2, ESPN Deportes, and ESPN+, – the leading multi-sport streaming service, in addition to TSN in Canada, and on a wide and diverse group of premier global distribution partner platforms reaching over 150 countries around the world.