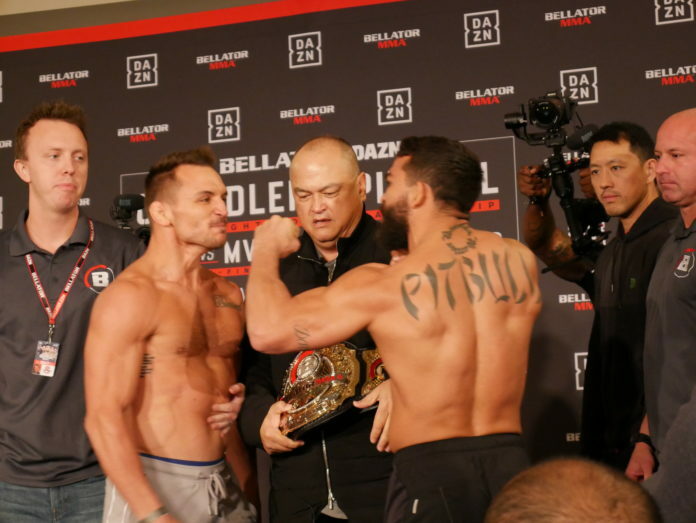 The biggest champion vs. champion match in Bellator history is about to go down.

Michael Chandler will defend his lightweight championship against the current featherweight champion Patricio “Pitbull” Freire in the main event of Bellator 221 on May 11 at the Allstate Arena in Rosemont, Illinois. It will be Chandler’s first title defense since reclaiming the belt from Brent Primus last December and “Pitbull” will move up to lightweight for the first time since 2016.

The co-main event features a welterweight grand prix semifinals match that will determine the next 170 lb. championship contender. After grinding out a close decision against Paul Daley, the undefeated Michael Page will take on his toughest opponent yet in former welterweight champion Douglas Lima. “MVP” enters the contest for the first time in his career as an underdog against “The Phenom”, and while the fight is slated for five rounds, most don’t expect the bout to go the full 25 minutes between the two skilled strikers.

Elsewhere on the card undefeated featherweight prospect AJ McKee takes on former champion Pat Curran in a scrap that could have ramifications for the upcoming featherweight tournament later this year, and former WWE wrestler Jake Hager takes on relatively unknown beef plant worker TJ Jones in a bout that will look to showcase “Jack Swagger”’s wrestling pedigree.

Check in here for up to the minute live results, and you can watch Bellator 221 live on DAZN with the main card starting at 9 pm EST and prelims starting at 6:30 pm EST.

Patricio Freire defeated Michael Chandler  at 1:17 of Round 1 via Knockout

Douglas Lima defeated Michael Venom Page at 0:35 of Round 2 via Knockout

Jake Hager defeated TJ Jones at 2:36 of Round 1 via submission (arm-triangle choke)

Tywan Claxton defeated James Bennett at 2:09 of Round 3 via TKO

Rob Fenicle defeated Bryan Bautista at 1:42 of Round 1 via submission (heel hook)

Christian Rodriguez defeated Jose Leon at 4:35 of Round 1 via submission (armbar)

Robert Morrow defeated James Bochnovic at 1:18 of Round 1 via TKO

Cris Lencioni defeated Adil Benjilany at 4:55 of Round 1 via submission (triangle choke)

Dave Latoria vs. Jason Belyew ended in a NC after a low blow in R1

Josh Streacker def. Scott Wirtz by at 2:33 of Round 2 via Knockout