Brant Moore: The South’s Next Star 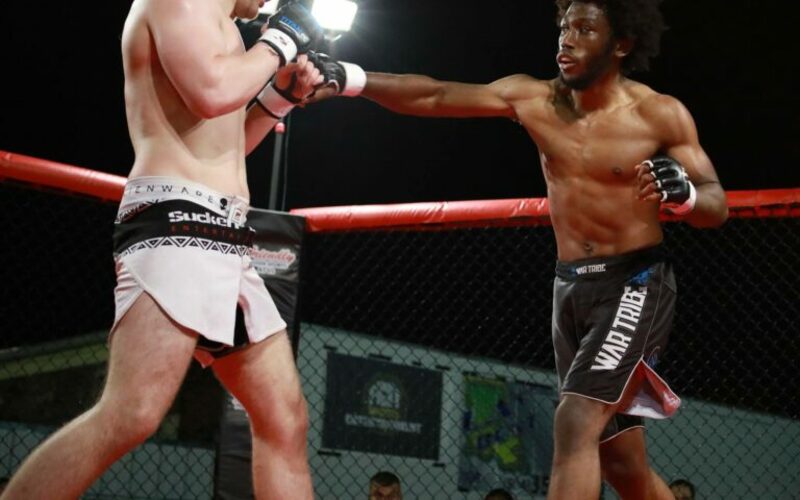 Louisiana and the Gulf Coast area are certainly known for producing some of the toughest and most skilled mixed martial artists in the world today. Most noteworthy, Louisiana natives Dustin Poirier and Daniel Cormier sit atop their respective UFC divisions as champions. New Orleans’ Macy Chiasson and North Louisiana’s Andrea “KGB” Lee are assending their respective UFC divisions as well. Another of those Southern-bred fighters on the rise is Brant “Killer Bee” Moore. Moore fights out of Longview MMA, the same team as UFC’s newest signee, Derrick Krantz.

Returning to His True Calling

As with many mixed martial artists, their introduction to combat sports started at an early age. Moore is no different though his sports career took a slight detour down the path of football.

“When I was three, I was put into Karate because I wanted to be like Bruce Lee, Chuck Norris, and Goku from [Dragon Ball Z],” Moore told MMASucka. “I was in that from 3-12 and stopped to play football. When I was about 16 I really wanted to do something combat sports related and found D-Rocks in Marshall [Texas] and started boxing and then found Jiu-Jitsu at 17 in the same gym.”

D-Rock Gym was opened in 2007 by Doug Krantz. Moore stated those were the foundations for his MMA career along with the guidance of UFC’s Derrick Krantz. Moore, above all, credits Krantz with molding him into the fighter he has become.

“That definitely goes to Derrick for me becoming the fighter I am as a whole. He’s really tough on the guys that he puts directly under him,” Moore stated. “He’s taught me everything I know about grappling which is what I’m known for in the fight game. As far as my striking I’d credit James Compton. His brain for striking and coaching puts me and my team in a league of our own in that department.”

You will be hard-pressed to find many more fighters as active on the mat as Brant Moore. At Rite of Passage 5 in October 2018 Moore defeated veteran Andy Brossette via Von Flue Choke in the first round.

Once the bout went to the ground, Moore kept active pressure on top and as soon as Brossette locked in a weak guillotine/headlock, Moore moved into position for the Von Flue to end the bout. Moore’s ground game is well calculated and thought-out. You can tell every move is thought out a millisecond before its occurrence.

Another example of his famed grappling came in his professional debut which took place at LFA 18 in August 2017. His opponent, AJ Nichols, threw a right leg kick which was caught by Moore. After that, Moore kicked out Nichols’ supporting leg bringing both to the ground and Moore immediately taking top control. Moore worked his way into a rear naked choke but Nichols was able to use the fence to get to his feet. Still, with control, Moore rolled to re-acquire the back of Nichols. After some adjusting, Moore ended up with the back and locked in the rear naked choke. Not only can Moore control on the ground, but he also has the stand-up ability to truly earn the name, a mixed martial artist.

Moore actually recalled a story wherein April 2019 he took on the calling to compete in a pro boxing bout weigh-in day. He ended up winning the next night. On one day’s notice, Moore took on Shreveport area boxer Dezmon Wise who was touted as, “Shreveport’s next big boxing thing.” Moore absolutely held his own with the professional boxer and ended up winning the bout via stoppage. Very little is seen of Moore’s striking game in the MMA cage merely because his ground game is so dominant. A lot of that has to do with skill but the mentality of not making a mistake for his opponent to capitalize on.

Ascension up the Pro Ranks

After a successful amateur career, which includes a win over Bellator veteran Jesse Roberts, Moore turned pro in late 2017. Four of Moore’s five victories in the pro ranks are all by submission. His lone decision was a tough outing against Louisiana native, Michael McDonald, at Battle of New Orleans (now known as Bayou Fighting Championship.) One of Tapology’s top-ranked Louisiana professional lightweights is up for whatever task lays in front of him.

“As far as challengers, I don’t have any in mind off the top. It doesn’t really matter who it is,” Moore stated. “Whoever’s across from me is getting smoked. I’m not a pick and choose type of guy. I’ve fought plenty of tough guys on very little notice.”

Moore is hoping for a chance to showcase his skills on the Dana White Tuesday Night Contenders Series. “I feel the UFC is still at the pinnacle of our sport. When I cornered Kevin [Aguilar] at his last UFC fight, I got to see how big the game really gets,” Moore told MMASucka.

Teammate Kevin “Angel of Death” Aguilar recently competed at UFC on ESPN: Barboza vs. Gaethje in March 2019. Aguilar was victorious in his bout against Enrique Barzola via unanimous decision. Moore stated he’s seen fighters become “struck by the lights” fighting under the sport’s biggest lights. He does not feel that will be an issue for him.

Every fighter, or any athlete, has that one person or team they wish they could be matched up against just once for their own fulfillment. Many have all thought, “what if a prime Michael Jordan played a prime Lebron James” or “what if a prime GSP fought a prime Anderson Silva?” Well, Moore has his own matchup. “That would be Anderson Silva. Because of how dominant he was and that he was one of my favorite fighters when I was younger to watch,” Moore stated.

It will not be a fantasy for long before we see Brant “Killer Bee” Moore under the UFC lights. Certainly, keep an eye on this Southern warrior.