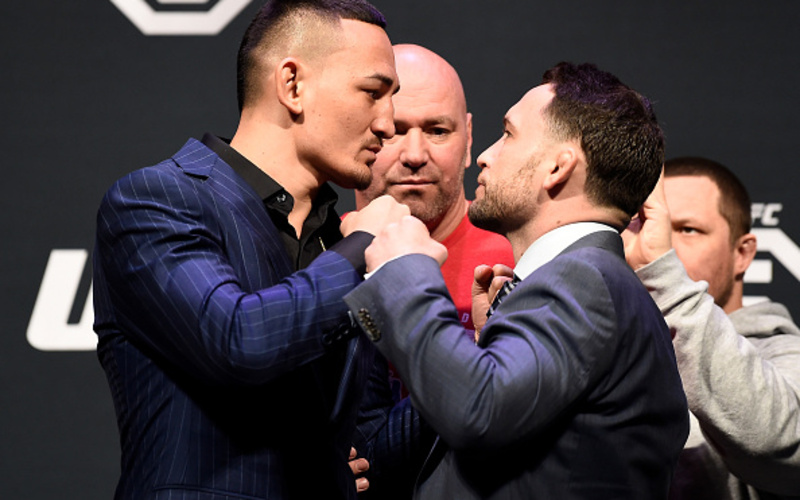 The headlining fights continue to be pile up. Reported by ESPN’s Brett Okamoto, UFC featherweight champion Max Holloway and Frankie Edgar have verbally agreed to fight.

Currently, the fight is being targeted for UFC 240. The event will take place on July 27th in Edmonton, Alberta, Canada. Max Holloway is coming off a loss at lightweight to now interim-champion Dustin Poirier at UFC 236 via unanimous decision. Edgar, on the other hand, is currently on a single fight win after defeating Cub Swanson at UFC Fight Night 128. Both competitors are future hall of famers in the sport, and this fight makes an interesting match-up.

Many fans may feel like the true deserving number one contender should Alex Volkanovski. “The Great” has a current MMA record of 20 wins with only 1 loss. He just recently competed at UFC 237 – defeating former featherweight champion Jose Aldo via Unanimous decision. Prior to UFC 237, Volkanovski has held wins over Chad Mendes, Darren Elkins and Jeremy Kennedy. Since joining the UFC ranks, Volkanovski has been terrific. Going 7-0 and being one of the most active fighters on the roster, a title shot seemed imminent.

However, as Okamoto stated, this might be a very active year for Max Holloway. It cannot be disputed that both Edgar and Volkanovski are skilled fighters and deserving of a title shot. It may be possible that “Blessed” is looking to have himself a bounce-back year. After having his 13-fight win streak snapped by Poirier, Holloway’s competitive spirit is surely to shine.

Whatever the case may be – a fight between Edgar and Holloway will bring fireworks. Both men bring interesting styles to the table. These fighters are never ones to back down, and will always bring it come fight night.