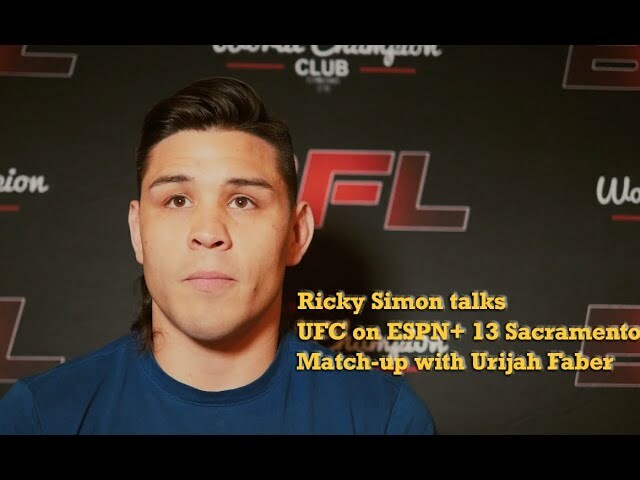 UFC bantamweight Ricky Simon came into the promotion as a star in the making. His next outing could catapult him into the stratosphere as he takes on UFC Hall of Famer Urijah Faber.

Faber will be returning from a short retirement hiatus and Simon will be welcoming him back into the Octagon. The 26-year-old looks to make the best of this opportunity.

“It’d be a little bit crazy if I said it wasn’t pretty cool to fight Urijah Faber, but at the same time my mindset is the same — every fight is my most important fight,” Simon told MMASucka.com. “I’m training for this like I do every fight, I’m going in there ready to kill.

Since I got this fight I’ve been saying, he’s a legend and it’s going to be awesome to get in there with him. But, he’s towards the end of his career and I feel like beating him is going to start my legacy.”

Ready to take on a legend

The Gracie Barra Portland product is riding an eight-fight winning streak, with three of those coming inside the UFC Octagon. When preparing to fight someone like Faber, he says he will just continue to do what he does best, work hard.

Where will a win place him in the bantamweight division?

Faber was a top 10 ranked fighter prior to exiting the Octagon for retirement. Simon sits just outside the top 15 at this point. So, from his perspective, he’s not certain what this will do for him in the rankings, but in the end, he’s fighting the name — Urijah Faber.