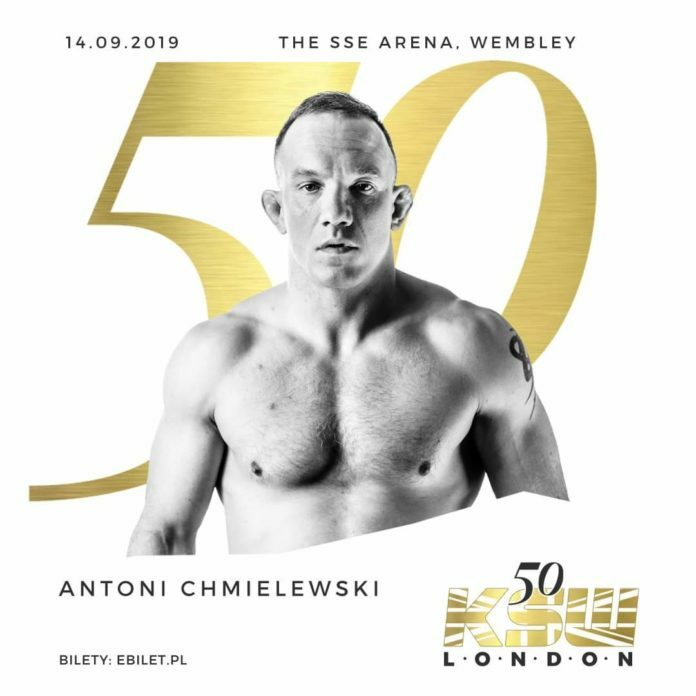 Though KSW 50 is set several months away for September 14, 2019, it’s never too early to play matchmaker. According to the KSW website, KSW heavyweight champion Phil De Fries, light heavyweight champion Tomasz Narkun, Damian Janikowski, and Antoni Chmielewski are listed as having TBD opponents for the event set for Wembley Arena in London, England. So lets play matchmaker and predict opponents for the four competitors we know who are on the card.

Heavyweight champion Phil De Fries currently sits atop the KSW throne with a recent victory over light heavyweight champion Tomasz Narkun at KSW 47 in March 2019. The heavyweight division is definitely the most popular division in all of KSW and there are many young, rising stars in the division. Stars such as Erko Jun, Szymon Kolecki, and the yet to debut movie star Martyn Ford. The fighter probably next in line is the KSW newcomer, Damian Grabowski. Grabowski is a former UFC veteran who dismantled former KSW champion Karol Bedorf via second round TKO at KSW 49 in May 2019. The “Polish Pitbull” is 2-0 since leaving the UFC with both of those victories coming by way of KO/TKO. Until Jun can get a few more tested veterans under his belt, no one seems to stand in Grabowski’s way of a title shot in September.

Light heavyweight champion Tomasz Narkun looked to be on top of the world defeating KSW legend Mamed Khalidov twice in a row, sending the legendary fighter into retirement. After going the distance with De Fries, it’s very arguable to say Narkun is the runner-up when it comes to the pound for pound best in the organization. So with a weight class so depleted with a king of the division so dominant, who is there to face Narkun on top of the mountain?

Maybe a middleweight like Michal Materla will move up or maybe KSW will bring in a free agent on the market to push into an immediate title shot. Maybe someone like a German submission specialist Stephan “T-800” Puetz. Another possibility could be Jimi Manuwa. Bringing him in following retirement to compete for gold in his home country of England would be interesting.

Middleweight Damian Janikowski has had a rough go of it lately, dropping his last two bouts. These tough outings dropped his perfect 3-0 start to a 3-2 record. The Olympic medalist in wrestling has all of the talent to be a world champion. Sometimes he gets carried away and typically gets caught by a more experienced fighter.

So who would be a great matchup for the Polish star you want to help back onto his feet? A Materla rematch already has a built in story. Materla caught Janikowski in the first round giving him his first loss. This took Janikowski’s opportunity to advance in the middleweight tournament. For name value, this is probably the best matchup being the third match from the top in the billing. A win over Janikowski could help Materla get back in the running for a shot at Scott Askham for the middleweight KSW crown.

Many may not be familiar with the Polish finisher, Antoni Chmielewski. He is a veteran of the sport with at least 49 professional bouts under his belt. Chmielewski last competed in the cage was two years ago at KSW 41 where he was defeated by Janikowski. He is an absolute veteran of the organization, competing on and off in KSW since KSW 2. He was the winner of the one-night tournament. This could be a perfect matchup for Aleksandar Ilic who is coming off of a very impressive KO of Janikowski. Building up Ilic with as many KO-potential bouts is a great way to build him up as Askham’s next opponent. A matchup between Ilic and Askham could have lots of fireworks for KSW for the beginning of 2020.